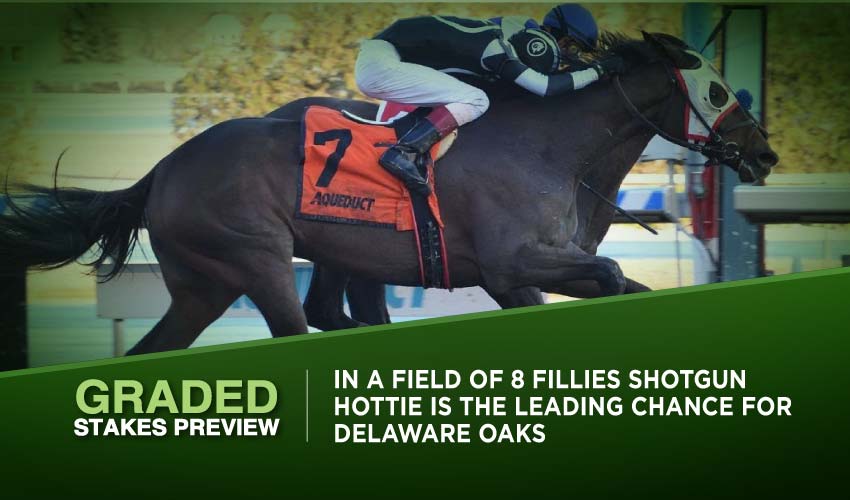 On Sunday, there are two Graded races to be held at the Delaware Racecourse. At first, three-year-old fillies will clash in the G3 Delaware Oaks over a mile, and a half of a furlong, where Shotgun Hottie could snatch up her premiere Graded triumph.

Later on, three-year-old colts and geldings line up for the Kent Stakes, where in 2020, awesome stayer Gufo struck gold. This time, a black-type winner, Main Event, is the leading victory candidate, yet Brad Cox sends an interesting contestant in Tommy Bee.

This G3 race is open only to three-year-old fillies who will clash at the distance of a mile and a half of a furlong. On the dirt surface, eight fillies will vie for the purse of $300,000, while Shotgun Hottie looks like the leading chance here.

The daughter of Gun Runner has seven starts under her belt as in 2021, she scored a maiden and ran in fourth in a black-type company where she bagged a victory in February. Subsequently, she placed second in a Listed and last time out, the William Morey trained filly finished third in the G3 Gazelle Stakes.

Honestly, such a performance suggests she should be classy enough to score the Delaware Oaks; moreover, Shotgun Hottie is consistent and is expected to deliver another fine run. Her most serious rival seems to be unexposed Republique. The Saffie Joseph bound bay has recorded only two outings as in April, she broke her maiden by a length, upon which the daughter of Strong Mandate prevailed in an Allowance race.

The distance should suit her, but her class is unknown, and therefore, her victory won’t be surprising and getting beaten for the first time won’t come as shocking, too. Midnight Stroll is the third win candidate of the bunch as the John Terranova II trained filly triumphed in a black-type company, and comfortably so.

However, it was only over the distance of seven furlongs; furthermore, she finished ninth and was well beaten in her following G2 attempt. It was definitely too much for her back then, and Sunday’s competition should be easier; still, Midnight Stroll needs to prove here she’s made of a Graded material.

The rest of the field would cause an upset if running down the abovementioned trio; however, Sandstone deserves some attention as she placed third in the G2 Golden Rod Stakes in 2021. After bagging a black-type success, she didn’t fulfil the role of a favourite there, but if she shows something similar on Sunday, she might be a player.

It’s necessary to say that neither of her 2022 outings sparkled any interest, given she was seventh and fourth at the black-type stage. The last participant to talk about is Chardonnay, who broke her maiden in February at the sixth attempt. Last time out, she scored an Allowance race and could be capable of some further progress.

Shotgun Hottie, who has already placed at the Graded scene, and according to her suggested class, she should handle this company and achieve a G3 victory.

The competitive field of nine three-year-olds will compete for the purse of $200,000 and cover the distance of a mile and a half of a furlong. On the turf surface, Main Event could strike gold at the G3 stage as he has a comfortable victory in the black-type company under his belt; moreover, he finished second in a Listed in March.

The colt trained by George Weaver looked quite progressive but failed to affirm it in the G2 American Turf because back then, he had a good gallop and still made utterly no impact. Finishing last but one, his effort was very disappointing, and he’ll try to make amends on Sunday. Brad Cox relies here on Tommy Bee, who has no Graded experience. In 2021, he won a maiden, and in the ongoing season, he bagged two victories at the Allowance level.

Although he didn’t win at the higher stage, he collected second places at the black-type and Listed scene, so it’s not difficult to see him winning at some point. Truth be told, his Allowance success from April was quite emphatic, so he’s considered for the Kent Stakes.

Graham Motion sends in Speaking Scout, who finished sixth in the G3 Kitten’s Joy Stakes and eighth last time out in a black-type race, yet he was second in a Listed in 2021. If he draws on that performance or his Allowance victory from April, he could snatch up a place here, but there are much more interesting participants in the field. For example, in June, Wow Whata Summer, trained by James Lawrence II, shocked his rivals in the G2 Penn Mile Stakes.

Prior to that triumph, the gelding wasn’t able to score anything else but a maiden; moreover, he didn’t even place in a better company, but at the Penn National Race Course, he shone brightly. After pursuing the leader, Wow Whata Summer took command midrace and subsequently didn’t allow anybody to better him. He’s about to carry the biggest weight on Sunday due to that success; still, if his performance wasn’t an entire fluke, he could surprise his opponents once again.

Christophe Clement’s Elizar didn’t show much in the G2 Pennine Ridge Stakes in June, but it was his premiere starts after transport from France, where he recorded a maiden victory while boasting lots of talent. Without a doubt, he should be capable of more than just tailing home in last in a G3 feat. He might need more time to settle but he absolutely could be a very good Graded horse.

Main Event, who was lacklustre in his most recent outing; still, his previous efforts were fine, and he deserves another chance to fire.