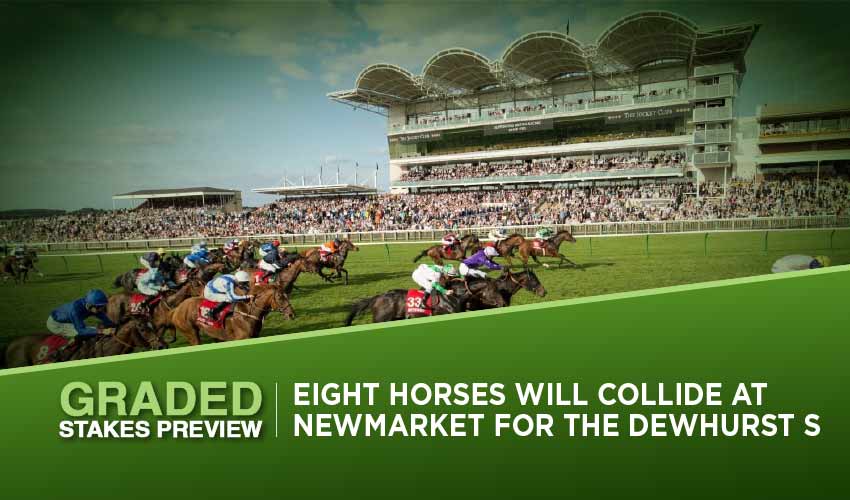 One of the October meetings at Newmarket Racecourse begins on Thursday, while the pinnacles are held on Friday and Saturday. At first, three-year-old and older horses meet in the G2 Challenge Stakes, and then two-year-old fillies will clash in the Fillies’ Mile, where promising Inspiral attempts to maintain her unbeaten record. The G1 Dewhurst Stakes headlines Saturday’s card as it’s the most prestigious race for two-year-olds in the United Kingdom.

At a distance of 7 furlongs, nine three-year-old and older horses will compete for the purse of £120,000 in this G2 race where the blue colors of Godolphin have a big chance to strike gold. Regarding the choice of Charlie Appleby-retained jockeys, William Buick opted for four-year-old Al Suhail (4-1), whose most significant success came at the Listed scene to this date. Since then, he was gelded, finished third at the G3, and scored a victory in Class 3. With third place in a Listed last time out, his record doesn’t resemble a future G2 scorer in particular, but Al Suhail is still a young horse capable of progress.

Al Suhail’s victory wouldn’t be surprising then, but he has a strong opponent in his stable-mate D’Bai (5-1). The seven-year-old has been a synonym for consistency, for he’s always been a useful horse at the Listed level, but also at the Grade scene as he bagged two G2 victories in Dubai, including this year’s Zabeel Mile. In his last outings, he faced Al Suhail and managed to leave him behind by ¾ of a length, which might also transfer to the Challenge Stakes.

Still, the field features other interesting participants, namely three-year-old Chindit (9-2), who commenced his classic season as a G2 winner; even though he managed only to win a G3 this year, he displayed his class in the 2000 Guineas where he finished fifth. He then took the same place twice more at the top level and grabbed the fourth place in a solid G2 race, so it’s fair to say Chindit shouldn’t be disregarded for the Challenger Stakes at all. Four-year-old filly With Thanks (15-2) has recently boasted form, but she needs to progress some more to beat D’Bai and Al Suhail this time. Garrus (12-1) also deserves to be mentioned, for he’s been a decent sprinter for his connections; however, he’s about to try the 7-furlong distance for the very first time in Friday’s race.

Our free betting pick for the Challenge Stakes is D’Bai, as he’s shown he can handle good to the soft surface together with the distance and the quality of the field.

The G1 turf race for two-year-old fillies is headlined by John and Thady Gosden bay Inspiral (4-5), who is unbeaten in three starts. However, the purse of £500,000 attracts other eight fillies; neither of them seems without a chance at the distance of a mile, though. Inspiral has caught the eyes in all of her outings as she scored a win at her debut easily, then left Wild Beauty (12-1) behind in the Listed company, and when she headed for the G2 May Hill Stakes at the distance of a mile, she delivered what was basically expected of her – the Frankel filly breezed along with her rivals in the final stage and won impressively by almost four lengths.

Inspiral is about to bag her first G1 victory on Friday; while she seems to possess every necessary quality to do it, but there is one question she’s yet to answer – will she handle a softer surface? She’s indeed run only on good to firm, and Sunday’s card promises good to soft ground, which could inconvenience the favorite. Still, none of her most serious rivals seems to have an affinity towards such a ground whatsoever, which could play into Inspiral’s cards.

Mentioned Wild Beauty recorded two minor victories before Inspiral denied her a Listed win, upon which she didn’t manage to win in the G3 company as Majestic Glory (18-1) took the better of her. The Charlie Appleby charge was a Grade winner in the making, though, which she proved when she traveled to Woodbine, Canada, and effortlessly scored a G1 triumph in the Natalma Stakes over a mile. For sure, she looked like a real two-year-old champion filly back then, so it will be interesting to see her face Inspiral and Majestic Glory once more as Wild Beauty definitely has matured since getting beaten by them. Moreover, Majestic Glory was unimpressive last time out, finishing down the field in the Rockfell Stakes. Aidan O’Brien’s Concert Hall (15-2) also has some flops under her belt, but in September, she achieved her first Grade victory in the G3 Weld Park Stakes over 7 furlongs. On the one hand, her pedigree suggests she should be able to perform well among the elite, on the other one, she doesn’t look appealing on the softer ground that is expected on Friday.

Mise En Scene (13-2) is another exciting filly in the field due to her G3 win at the Goodwood Racecourse in August. Back then, she ran only for the second time, but despite that, she left behind Hello You, a subsequent G2 scorer, and looked ready to handle one mile. Although all the participants seem classy enough to bag the Fillies’ Stakes, the last one to mention here is smart Magical Lagoon (11-1), a half-sister to multiple G1 winner Novellist.

Our free betting pick in the Fillies’ Mile is Inspiral because she seems to be the classiest participant at this point, but the going might not be in her favor.

The most treasured G1 race for two-year-olds in the United Kingdom is held at a distance of 7 furlongs, with £500,000 being up for grabs. On Saturday, eight participants will clash at the turf surface, which is expected to be still good to soft, while the leading chance is quite clear here – it’s Charlie Appleby trained bay Native Trail (8-11). Looking at his outings from today’s perspective, even his debut is interesting as he left Royal Patronage behind by four lengths. The mentioned colt then went on to win the G2 Royal Lodge Stakes. Native Trail remained unbeaten thanks to succeeding in his two next starts as he scored in the G2 Superlative Stakes and became a G1 winner when bagging the Vincent O’Brien National Stakes by three and ½ of a length before Point Lonsdale. Although the Oasis Dream bay is still very green, his turn of foot is stunning; therefore, there’s no doubt he’ll head to the Dewhurst Stakes as a favorite. Native Trail’s future seems to be something to look forward to.

His rivals showed some talent but need to bring their game to another level if they want to threaten the Godolphin “big baby.” Ger Lyons has had several prominent two-year-olds in the last years, while Straight Answer (11-2) looks quite smart, too. He won his debut easily, and then he shook off the competition in a Listed race at Fairyhouse. The question is how classy contestants he left behind; his performance wasn’t one to toss aside as he made the whole 6-furlong race by himself and drew clear of his rivals in the end. He shouldn’t mind the good to soft ground too much; moreover, he doesn’t seem bothered by another furlong, so together with Bayside Boy (5-1), he is the main challenger for the favorite. Roger Varian Bayside Boy has three starts under his belt, and even though he didn’t succeed at his first attempt among the high-quality company, he managed to strike in the G2 Champagne Stakes against hugely preferred Reach For The Moon. At first sight, he might not look as classy as Native Trail, but that will prove right or wrong only on Saturday.

Aidan O’Brien relies on Glounthaune (12-1), a winner of his debut where he held off finishing Castle Star, who then went on to place second in the G1 Middle Park Stakes behind Perfect Power. However, since April, he hasn’t hit the track, which should be regarded in terms of his chances. Berkshire Shadow (25-1) is a well-known name as he scored the G2 Coventry Stakes at Royal Ascot, upon which he ran a fine race in defeat when finishing second in the G2 Vintage Stakes behind another G1 winner, Angel Bleu. His last outing was disappointing, returning to the distance of 7 furlongs should help him, though. Dubawi Legend (16-1) may also be in the mix if he can benefit from his previous run in the G3, being beaten primarily by very promising Royal Patronage, as his 5-length debut victory was prior. This suggests he should be a decent colt.

In the Dewhurst Stakes, we pick Native Trail, who should have the most class and ability of the pack.

Follow us on Social Media for instant Dewhurst Stakes updates!