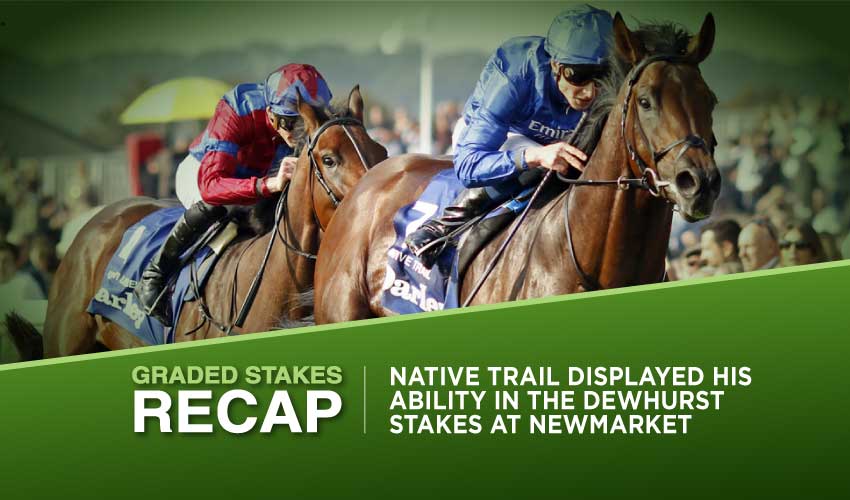 One of the October festivals in the United Kingdom was held at Newmarket during the past week, with the pinnacles being the G1 races for two-year-olds. Both of them saw favourites for the Classic races 2022 to maintain their unbeaten records as Inspiral dominated in the Fillies’ Mile, while Native Trail displayed his ability in the Dewhurst Stakes recap, which is perceived as the most prestigious British race for the youngsters. On Friday, three-year-old and older horses clashed in the Challenge Stakes, where Al Suhail was a clear winner.

In the end, there was no drama about the 7-furlong G2 race as favourite, four-year-old Al Suhail (3-1), made the whole race and scored easily by 3 a ½ of a length. The Charlie Appleby’s charge showed a nice early speed in the race with the purse of £120,000, so William Buick let him gallop on the front.

He gradually gained a bigger and bigger advantage over his rivals, winning the Challenge Stakes for three-year-old and older horse gate-to-wire in 1m 24.29s. Basically, nobody managed to react appropriately to the favourite’s cruise to the winning post, as it simply took too long for three-year-old Chindit (7-2) to rally forward properly, while filly With Thanks (17-2) struggled with space at the fence. Finally, they could clash only for the second place, which the four-year-old filly snatched by a neck in front of Chindit. Still, both of them affirmed to be smart G2/G1 performers.

Al Suhail’s career resembled a roller-coaster ride as there’s always been something about him, yet the results were far from consistent. His Friday’s triumph may suggest the gelding has settled and could draw on this impressive performance in the future. After all, he’s a half-brother to G2 winner Telecaster, once an Epsom-derby favourite.

Where Al Suhail had a brilliant run on Friday, his stable-mare D’Bai (17-2) simply couldn’t shine in the slightest as he was blocked by his rivals all the time, and didn’t even hit a board as behind the first three, veteran Safe Voyage (11-1) grabbed the fourth place in front of outsider Jouska (33-1) running in fifth.

Like Native Trail in the Dewhurst Stakes, two-year-old Inspiral (8-11) bid for her fourth consecutive win and strived to keep her unbeaten record. Held over a mile with the purse of £500,000, the G1 Fillies’ Mile on the turf surface welcomed nine two-year-old fillies, and even though most of the participants have already proved to be decent youngsters, the whole race was about to revolve just around Inspiral.

Thady and John Gosden bound filly didn’t rush anywhere at the beginning, following Cachet (22-1) in the centre of the track while the rest of the field ran on the side. As soon as the two groups merged, Frankie Dettori was looking for a spot to send his mount in, and once Inspiral was well in between her rivals, she slowly but steadily commenced her finish.

She took command a furlong from home, and as Cachet and Prestigious Voyage (16-1) were still trying to close on her, Inspiral readily maintained her advantage on them. The bay crossed the line as a clear winner in 1m 38.44s. 2 and ½ lengths back, underestimated Prosperous Voyage finished second after she showed the way of the more numerous group at the side, while Cachet took third.

Frankel’s daughter Inspiral, currently the 1000 Guineas 2022 favourite, has seemed promising since her successful debut. She went on to win a Listed race and the G2 May Hill Stakes, where she easily beat Prosperous Voyage.

The Ralph Beckett filly wasn’t expected to seize the same place here as the field of packed with supposedly better fillies, yet Prosperous Voyage displayed her potential once more together with Cachet, who was overlooked as well despite the fact she finished second in the G2 Rockfell Stakes. Still, Mise En Scene (15-2) and Wild Beauty (15-2) simply seemed more appealing prior to the race as the former dominated good company in a G3 event, with the latter being a G1 winner of the G1 Natalma Stakes in Canada. In the Fillies’ Mile, they couldn’t snatch a better place than fourth and fifth, respectively.

The most anticipated race for two-year-olds in the United Kingdom didn’t see a surprising result whatsoever as Native Trail maintained his unbeaten record, scoring the G1 turf race over 7 furlongs by two lengths.

The Vincent O’Brien National Stakes in Ireland winner was the favourite here as the purse of £500,000 didn’t attract any participants who have shown as much class at the Godolphin bound bay trained by Charlie Appleby. William Buick kept him at the fence behind the leader, which subsequently led to a moment when Native Trial was stuck behind Dubawi Legend (12-1), but the giant two-year-old managed to make himself some space and get next to him. It took a while before the favourite got rolling, but when he did, he drew clear from the former leader and won his second G1 event in 1m 24.82s.

After running a huge race, Dubawi Legend held onto second place in front of Bayside Boy (9-1). The scorer of the G2 Champagne Stakes, winning over preferred Reach For The Moon, also struggled a bit with a shortage of space in Saturday’s race.

Regarding the winner, he’s unbeaten in fourth outings and undoubtedly one of the best two-year-old of the season 2021; however, being sired by Oasis Dream, it’s a question of whether Native Trail should, indeed, be seen as the favourite for the Epsom Derby 2022. Still, only time will tell how far the colt can go, but the 2000 Guineas 2020, for which he’s preferred as well, seems to be a more realistic target.

The G2 winner at the Royal Ascot meeting, Berkshire Shadow (22-1), finished fourth, while the second chance of the race, Straight Answer (6-1), trailed to the last place in the final stage. Last-minute implementation for the Dewhurst Stakes seems not to be such a good idea from his trainer, Ger Lyons, anymore.