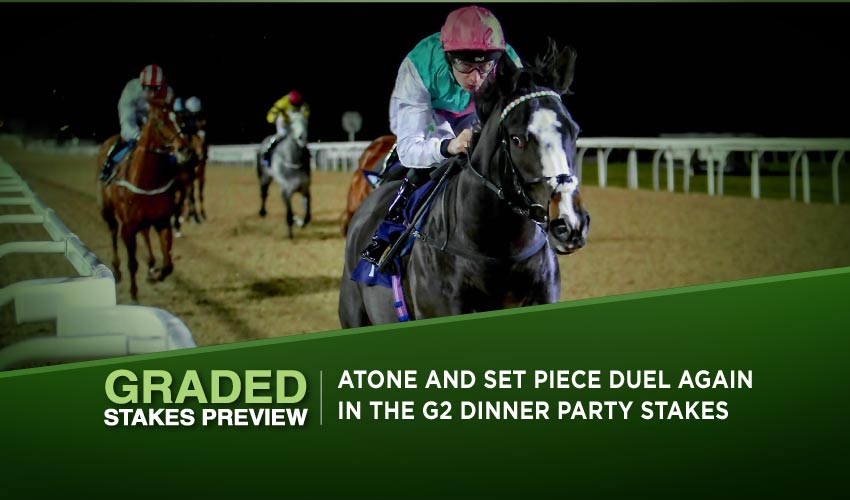 The Preakness dominates the stakes-heavy Saturday meeting at Pimlico, but there’s plenty to see on the undercard. Atone and Set Piece duel again in the G2 Dinner Party Stakes, there’s bound to be a burn-up in the G3 Chick Lang with so many front-runners in opposition, home favorite Jaxon Traveler takes on the improving Disco Pharoah in the G3 Maryland Sprint, and Chad Brown unleashes yet another female turf star in the shape of Technical Analysis in the G3 Gallorette.

Recent history is the watchword for the Dinner Party Stakes, one of the oldest Graded races in the whole of North America and the supporting act for the Preakness at Pimlico on Saturday. Last year Mike Maker sent out the winner, the previous year Brad Cox had his name on the trophy, and the two trainers have the leading fancies for this year’s contest, two rivals with history of their own.

Last time out Atone took on Set Piece in the G1 Maker’s Mark Mile at Keeneland and they ran fourth and seventh behind Shirl’s Speight, with the longshot Atone coming out the better by just about a length in what was a crazy, blanket finish with just three lengths separating all eight runners.

It was a continuation of Atone’s recent improvement for Maker, with the five-year-old moving up to Graded level and looking right at home, finishing runner-up in the G2 Ft Lauderdale at Gulfstream Park in December – English Bee a half-length back in third – and then fourth in the G1 Pegasus World Cup Turf back at Gulfstream, beaten a length and three-quarters by Colonel Liam. Both those races were a mile-eighth, and perhaps Atone will be helped by the slight increase in distance from his last run.

Set Piece, on the other hand, seems to have plateaued after winning three straight at around this time last year, culminating in the G2 Wise Dan at Churchill Downs in June. He came too late and missed the G1 Fourstardave at Saratoga, was never a factor in the G1 Woodbine Mile, and then had seven months away before the Maker’s Mark, in which he threw down a short-lived challenge before dropping away. That will have sharpened him up but he is short odds for a horse who needs to prove himself all over again.

That Ft Lauderdale run was the first of four starts in Graded races for English Bee and the first of four straight defeats. Indeed, he is just one-for-12 at Graded level and the win was the minor-league G3 Virginia Derby almost three years ago, so it takes a leap of faith to imagine him suddenly finding the zip to figure here.

Conversely, Beacon Hill makes his Graded-stakes debut today, and will have an edge on him after missing out by a nose in a Keeneland allowance on his comeback from a six-month layoff. He has claims, as does former Brazilian whizz Novo Sol, G1-placed at home and third behind the high-class Gufo in the G2 Pan American at Gulfstream, although that was over a mile and a half. He has pace, though, as he showed on his US debut when winning an allowance optional claimer over a mile-sixteenth on the Gulfstream synthetic.

Tango Tango Tango is moving back up after allowance optional claimer wins at Gulfstream and Belmont Park, but don’t be fooled by his runner-up ticket from the G1 Bruce D at Arlington in August, as it was a very poor contest for the grade. He and Laurel Park allowance winner Nathan Detroit look up against it.

This is by no means a hot contest, but ATONE has been showing steady improvement in recent months and this looks a good opportunity for him to finally make his stakes breakthrough.

The password for success in the Chick Lang is ‘Steve Asmussen’, the trainer having won this sprint five times including three of the last four runnings, with the high-class Mitole and Yaupon among the names on the trophy, and he puts two in the gate in a bid to improve on that already enviable record.

His major player is Cogburn, who made all to win an allowance optional claimer at Oaklawn Park in March, his first start for six months, and then moved into stakes company at the same circuit, where he had the race won everywhere but the wire when beaten a neck by the rallying Whelen Springs, with almost ten lengths back to the third horse.

That effort suggests Cogburn will have no trouble adjusting to this upgrade and he could take a lot of catching if he breaks on top. His barnmate Chasing Time comes back to sprints after failing to make any impact on the Kentucky Derby trail, but he has been beaten on all three starts at this distance and may find everything happening too fast for him.

That was the second stakes win at Oaklawn for Whelen Springs and he will again be coming along late with his challenge, but he is 4lb worse off with Cogburn for that neck success, and with six runs under his belt already this year has less scope for improvement than that rival.

Morning-line favourite Old Homestead is unbeaten in three and graduated to stakes level last time at Keeneland, when wiring the field over seven furlongs for an authoritative score by three and three-quarter lengths. If he can steer clear of a speed duel – and that won’t be easy – his blend of pace and stamina will be a potent weapon.

Last-time-out Monmouth Park allowance winner Little Vic is yet another pace angle, having blitzed from the gate in New Jersey before drawing off to win by five and a half lengths. This is tougher but he’s certainly in good order, which goes too for Alottahope, zero-for-two in stakes but winner of a Laurel Park allowance over five and a half furlongs three weeks ago.

Add Lightening Larry to the pace options after his all-the-way win in a stakes at Gulfstream Park, add Doctor Jeff as well, who made all in a stakes at Belmont Park, although he has a six-month layoff to overcome. This will be fast and furious.

Blink and you’ll miss it, a field packed with early speed and improving sprinters. Perhaps COGBURN has the capacity for improvement to maintain his trainer’s fine recent record in this race.

Chad Brown has landed big races with turf distaffers on each of the last two Saturdays, and the morning-line suggests that a third success is on its way in the Gallorette, a race the trainer has already won three times.

Brown’s big hope is Technical Analysis , who developed into a class act through the last half of 2021, winning the G3 Lake George and the G2 Lake Placid at Saratoga before ascending to the top level in the G1 Queen Elizabeth II Challenge Cup at Keeneland, where she showed she belonged when finding only barnmate Shantisara too good.

Defeat on her first start of 2022 can be forgiven, lack of a recent outing telling when she was caught close home and beaten a half-length in a stakes at Aqueduct last month, and she should be ready to pick up where she left off last fall.

Graham Motion trained the Gallorette winner last year and sends Crystal Cliffs, who has never missed the board in seven starts in the US and France. She made her stakes breakthrough when moving fast around the turn and kicking clear to win at Gulfstream Park last month and she’s firmly on the upgrade, although playing catch-up class-wise with Technical Analysis.

Behind these two the quality falls away abruptly, with In A Hurry zero-for-five in stakes and only able to manage ninth in the G3 Pegasus World Cup Filly & Mare Turf at Gulfstream, and Scarabea with only a Gulfstream maiden win to her name, although she was a longshot fourth in the G1 Jenny Wiley at Keeneland last time, beaten eight lengths by – what a surprise! – the Brown-trained Regal Glory.

Either could hit the board today, but the remainder look likely to struggle. Stakes-placed Karakatsie has a ten-month layoff to overcome, Delaware Park stakes-winner Out Of Sorts is riding a seven-race losing streak, all in stakes, and hasn’t been closer than fifth in any of them, and Foggy Dreams is a long way out of her depth, coming back off just a week’s rest after finishing last in an allowance optional claimer here over five furlongs.

This represents a straightforward opportunity for TECHNICAL ANALYSIS, who has a distinct class edge and a trainer in unstoppable form in this type of race, to return to winning ways.

Pimlico is not the most obvious racetrack to inspire affection, the Baltimore circuit – known as Old Hilltop – really only flashes across public perception on one weekend a year, but now and again something about it evidently hits home to the heart.

So it goes for Jaxon Traveler, the only state-bred runner in the Maryland Sprint, for whom this venue is clearly something special. The four-year-old is two-for-three here, his only defeat coming when runner-up in the G3 Chick Lang on this day last year, and on his last visit won a stakes over today’s distance, although it was just a three-runner affair.

That was the last time Jaxon Traveler found his way to the winner’s circle, but on the evidence of his last two starts – runner-up in a stakes at Laurel Park, just foiled after trying to make all, and then runner-up in an allowance optional claimer at Aqueduct when again beaten narrowly, this time by Mr Phil – he could be returning to his best.

Mr Phil had half a length to spare over Jaxon Traveler on that occasion and has a 2lb pull now as he makes his stakes debut. There won’t be much between them but Mr Phil has never been to Pimlico before, and this is Jaxon Traveler’s backyard.

The lightly-raced Disco Pharoah – just four starts – has any amount of scope for improvement, and showed that he already has a touch of class when an impressive winner of a Laurel stakes over seven furlongs, putting the race to bed at halfway and keeping on strongly, with Threes Over Deuces beaten three and a half lengths into third, War Tocsin two and three-quarter lengths back in fifth, and Sir Alfred James sixth, beaten another two and a half lengths.

War Tocsin was sixth in this race a year ago and has consistently proved himself not to be capable of winning at this level, although two starts ago he was a longshot runner-up in the G3 General George at Laurel, well ahead of the same old faces Sir Alfred James and Threes Over Deuces, who was seventh in the Maryland Sprint a year ago.

Equally, the hard-working Sir Alfred James (nine starts already this year) isn’t Graded-class, although he did run fourth in the G1 Churchill Downs at the eponymous track, beaten nine and a quarter lengths by the top-class Jackie’s Warrior. Sometimes these things happen; it’s not wise to treat it as evidence of hitherto undetected ability.

Last but certainly not least is Full Authority, who arrives here on a roll after two wins in allowance optional claimers at Oaklawn Park over six furlongs, showing plenty of grit last time to get the job done by a neck. He makes his stakes debut here but it isn’t the toughest baptism, and in his current mood should be in the mix.

Jaxon Traveller will be a threat at his beloved Pimlico, but there is a strong likelihood that DISCO PHAROAH is considerably better than he has shown in his brief career and he is the choice.

Sign up and get up to a 10% horse rebate. We have the biggest rebate! Check our Preakness Stakes odds, horse racing entries, and races results.