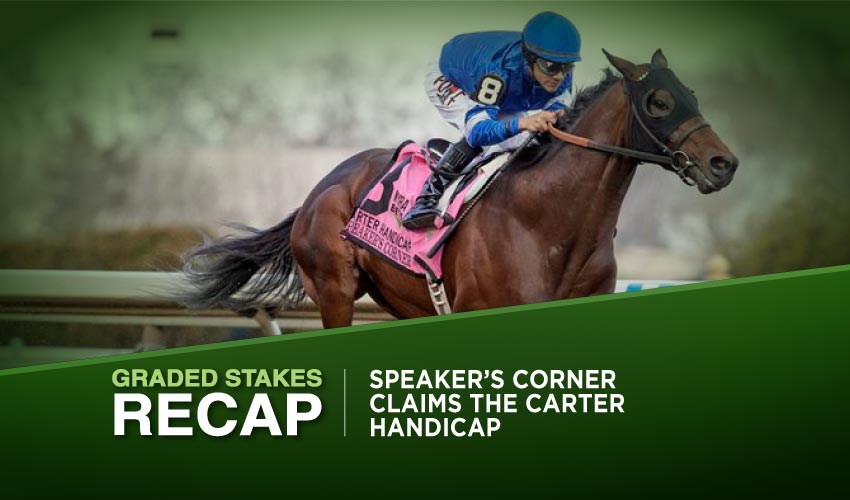 Saturday’s card at the Aqueduct Racecourse featured a couple of G3 races that saw victories of highly talented Glass Ceiling in the Distaff Handicap and Wit in the Bay Shore Stakes. While the G1 Carter Handicap morphed into a one-horse show thanks to brilliant Speaker’s Corner.

In this 7 furlongs-long G3 race, five four-year-old fillies and older mares met on the dirt surface to compete for the purse of $150,00; however, the preferred G1 victress Search Results (13-20) just had nothing extraordinary to offer here. Glass Ceiling (9-4) absolutely smashed her rivals as after sitting second behind pace-setting Kept Waiting (126-10), she took command in the final stretch and extended her lead to five lengths. With Dylan Davis aboard, the five-year-old bay crossed the wire in 1m 21.71s for her connections, including trainer Charlton Baker. Kept Waiting ran a big race here, easily securing second place with the advantage of 8 and ½ of a length to third Search Results.

The daughter of Constitution, Glass Ceiling, has developed into a respectable sprinter due to her wins at the Listed and G3 scene; however, she was a bit underestimated when opposed with a calibre of Search Results. Moreover, her tactic usually comprises finishing late from the rear of the field, while Search Result was just expected to lead the pack gate-to-wire without allowing anybody in front of her. However, the favourite didn’t appreciate the enormous weight she carried and trailed home in third, letting Glass Ceiling score her fourth win in a row. By coming home in second, Kept Waiting affirmed she could be a decent G3 mare, too.

Junior Alvadaro rode his mount in this G1 dirt race like he perfectly knew what he was sitting on. Speaker’s Corner (3-4) covered the distance of seven furlongs in the field of seven four-year-old and older horses as a champ, so after he had a good start, he galloped next to the leaders, and before they hit the turn, he was already at the front, running towards his premiere G1 win. The four-year-old colt trained by William Mott didn’t care about carrying the biggest weight and showed his class by scoring by four and ½ length in 1m 21.34s. The talented bay snatched most of the purse of $300,000 in front of Reinvestment Risk (68-10), who delivered a good performance, too. Mind Control (43-10) was third.

The son of Street Sense had always seemed quite promising, and even though his first attempt to score the G1 in 2021 wasn’t successful, Speaker’s Corner is repaying the connections’ patience in this season by bagging three wins in a row. On Saturday, he completed a victorious hattrick before the least carrying participant, Reinvestment Risk.

The last race to cover here was open to three-year-old colts who clashed at the distance of seven furlongs, vying for the purse of $200,000. In this G3 dirt event, Wit (2-1) returned after a lengthy absence and managed to do it with style, bagging the victory at the last possible moment in 1m 23.27s. After running close to the front, Jose Ortiz urged him to finish in the final stretch, which the Todd Pletcher bound colt did, yet it took some time for him to get in front of bravely fighting Highly Respected (29-10). Wit scored the race by a nose despite carrying the biggest weight. Highly Respected had to settle for second, while none of the remaining participant was a match for them with Life is Great (63-10) taking third.

Todd Pletcher relied on returnee Wit but also on Dean’s List (9-4), second from the Gotham Stakes; however, its form is currently a bit questionable, given the winner Morello failed among the better competition, and Dean’s List wasn’t able to make an impact in Saturday’s G3 and finished fourth.

Make sure to stay tuned for the latest Horse Racing Odds. Check out the World’s major Racetracks entries and don’t forget to Sign-up and get up to a 10% horse rebate. We have the biggest rebate!