Do Deuce upsets Serifos in the Asahi Hai Futurity Stakes 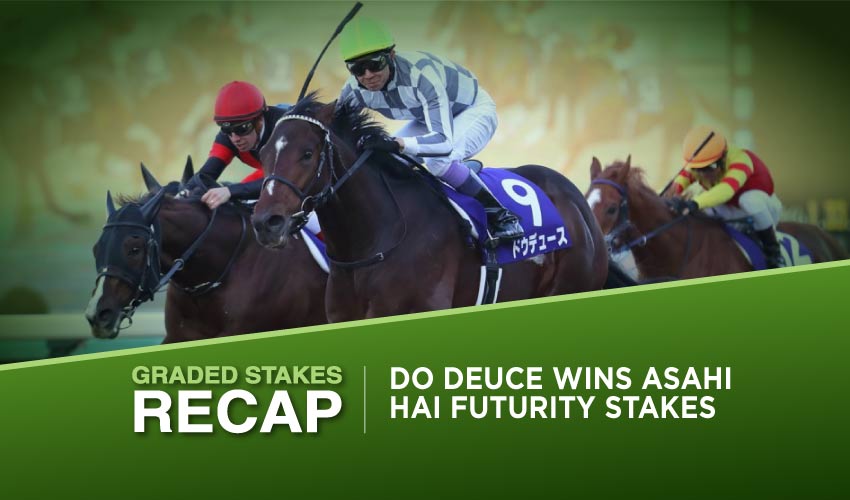 On Sunday, the unofficial pinnacle of the season for two-year-old colts took place in Hanshin, Japan, as the juniors covered the distance of a mile in the Asahi Hai Futurity Stakes. A couple of favourites wasn’t far away in the end, yet none of them managed to better unbeaten Do Deuce, piloted by Yutaka Take, who scored his first G1 victory since 2019.

The G1 turf event attracted the field of 15 youngsters, including some interesting unbeaten colts who were about to clash at the mile distance for the purse of 135,580,000 Yen. Do Deuce (68-10) belonged among the unbeaten participants here, and he arrived at Hanshin with a successful debut and a Listed victory under his belt; however, he had to face even a Grade winner here. Nevertheless, his chances were seen as quite good, while the Yasuo Tomomichi bound bay travelled smoothly throughout the whole race, galloping in the midfield to unfold his finish right on time. Experienced Yutaka Take took him outside in the final stretch so that his mount had enough space to rally forward, and truth be told, the big colt rather needed it. Powerfully charging to the front, Do Deuce passed one rival after another until he reached his perfect record maintaining Serifos (7-5).

Still, the favourite also fell victim to the eye-catching finish of the winner. Do Deuce swung by him to secure his premiere G1 win in 1m 33.50s, leaving preferred Serifos behind by a half of a length, and as the jockey subsequently confirmed, Do Deuce definitely suggested he should be capable of handling considerably longer distance among the elite. Second Serifos, the G2 Daily Hai Nisai Stakes winner, didn’t disappoint as he delivered a classy performance once more, surely leaving Danon Scorpion (87-10) in third.

The second chance, the G3 winning chestnut colt Geoglyph (11-5), was too far away from the front to have a say in the battle for the victory. Once Christophe Lemaire urged him to close on the leading horse, the talented colt, indeed, did; however, he could snatch only the fifth place from his previous position, also losing to fourth Al Naseem (28-1). Dobune (208-10) once was a quite expensive purchase, yet he managed to finish only seventh here, while the only filly in the field, Sprit the Sea (63-1), just faced too tough competition at her just second start of her career.