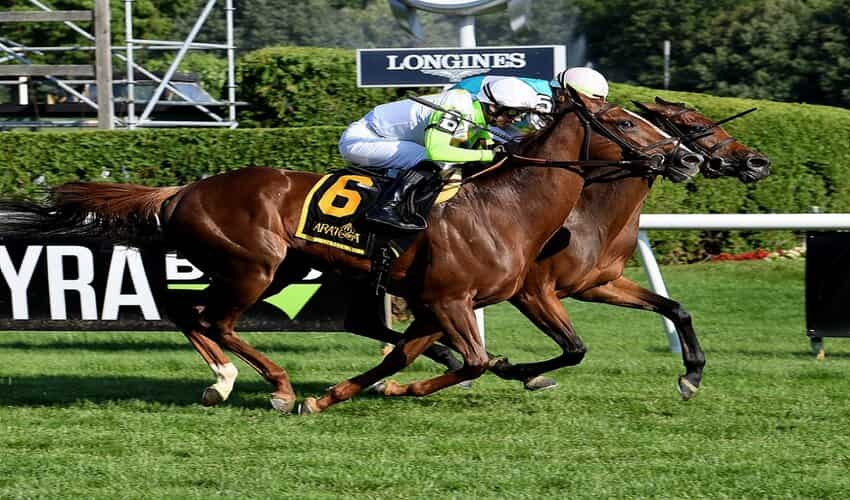 There was a dramatic outcome to the G3 Lake George at Saratoga on Friday afternoon, when barnmates Dolce Zel and Eminent Victor fought out a stirring finish in which the former prevailed by just a nose, providing trainer Chad Brown with the exacta and his sixth success in the distaff contest.

History suggested it was likely. The formbook said it was probable. The tote board said it was almost certain. The Lake George at Saratoga on Friday went the way of Chad Brown, as expected, and he nailed the exacta into the bargain, but there was still a twist in the tail as second-string Dolce Zel pipped the favourite Eminent Victor after a thrilling stretch duel.

Dolce Zel was 3-1 second-choice when the bell rang, and she sat behind the pace alongside 8-5 favourite Eminent Victor as Al Qahira laid down boilerplate fractions on the front end, twelving her way around the circuit. At the top of the stretch Irad Ortiz began hunting for racing room on Dolce Zel and found it on the rail, while Eminent Victor came wider and had clear water down the centre of the track.

The pair hooked up with a sixteenth to run, but it always looked as though the more experienced Dolce Zel had the upper hand and she got home by a nose from her barnmate, stopping the clock in 1:35 and three-fifths. Third-choice Koala Princess rallied for third, a length and three-quarters further back, while Al Qahira stuck around for fourth.

“She’s a tiny horse and that helped a little because there wasn’t much room, but the rail was the only choice so I took it,” said Ortiz, completing a double on the day. “She got through and put her head down and fought with the other one. It worked out good for us.”

The Lake George usually works out good for Brown, as this was his sixth victory in the race and his fourth on the bounce. The defending champion at Saratoga has got off to a great start at this year’s meet and was a happy man in the winner’s circle.

“It’s one of the many turf races up here that we really point towards,” he said. “Over the years it’s been a very rewarding race for us. I thought it would be close between my two and both horses ran a terrific race. It was just a shame one of them had to lose.”

This was the third win from six starts for the ex-French Dolce Zel, who has only missed the board once, when well down the field on debut. She’s two-for-four since coming Stateside and although she isn’t yet in the top echelon at Brown’s barn, she is certainly moving in the right direction.

Her next assignment may well be the G2 Lake Placid here over a mile-sixteenth on August 20, a race Brown has won three times, in which she is likely to renew shedrow rivalry with the tenacious Eminent Victor.