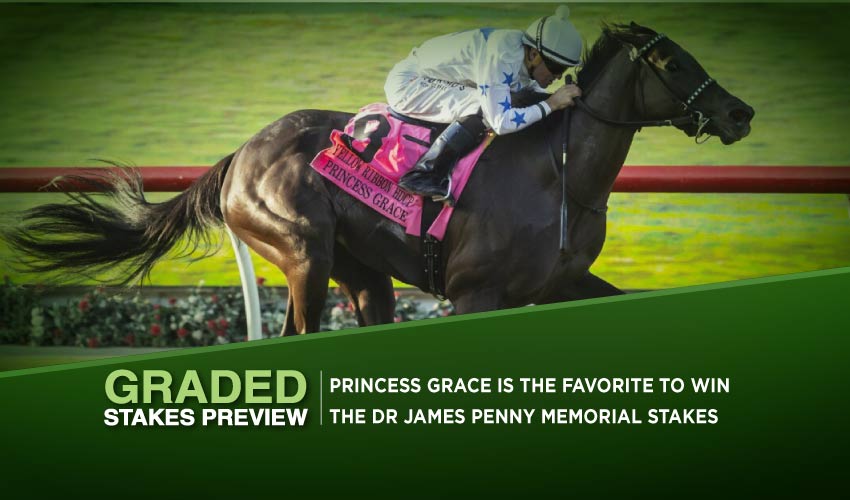 On Tuesday, a G3 race is held in the Parx Racing as three-year-old and older fillies and mares will line up for the Dr James Penny Memorial Stakes. On the turf surface, Princess Grace is favored here to win the event for the second time in a row.

This G3 turf race attracted some interesting three-year-old and older fillies and mares, who are about to clash over the distance of a mile and a half of a furlong when vying for the purse of $200,000. The leading chance seems to be the last year’s victress, Princess Grace.

The five-year-old mare trained by Michael Stidham is still quite unexposed as she’s recorded only ten starts. In 2020, she scored three times out of four outings, including bagging the G2 Mrs. Revere Stakes, upon which she commenced the season 2021 with a bang in the Dr. James Penny Memorial Stakes by a neck.

The daughter of Karakontie then concluded a victorious hattrick in the G2 Yellow Ribbon Stakes and continued in her fine career with a victory in the G3 Kentucky Downs Ladies Turf Stakes, while her subsequent third place in the G2 Goldikova Mile wasn’t bad at all, which also applies to running third in the G1 Matriarch Stakes.

However, Princess Grace hit the track just once in 2022, finishing seventh in the G3 Eatontown Stakes. Without a doubt, it was her worst performance ever, but even champions can have weaker days, and therefore, she is quite expected to bounce back on Tuesday and become a back-to-back winner of the Dr. James Penny Memorial Stakes as her class is evident; moreover, the distance suits her perfectly.

She is the clear favorite here, with her most serious rival is only eligible for the race, so it’s not sure whether Sweet Willemina will really take her on. The five-year-old mare hasn’t lined up for a Graded race yet, but last time out, she suggested to be capable of more than scoring at the black-type or Stakes level because she stormed home in an Allowance race with the advantage of full eight lengths.

Such an effort simply caught some attention, and therefore, Sweet Willemina would deserve a chance to go against Princess Grace here. Flirting Bridge and Classic Lady look interesting, too, given the former also delivered an easy triumph in an Allowance last time out, while the latter is a double black-type winner with a decent seasonal debut under her belt.

The last to mention is Runaway Rumour, whose 2022 form is in question; she placed second twice at the G2 stage in the past season, though. If she finally remembers these times, she might snatch up a good place here as well.

Princess Grace, whose career exploits exceed those of all of her rivals. Her seasonal debut was lacklustre; still, she deserves to be trusted once again.