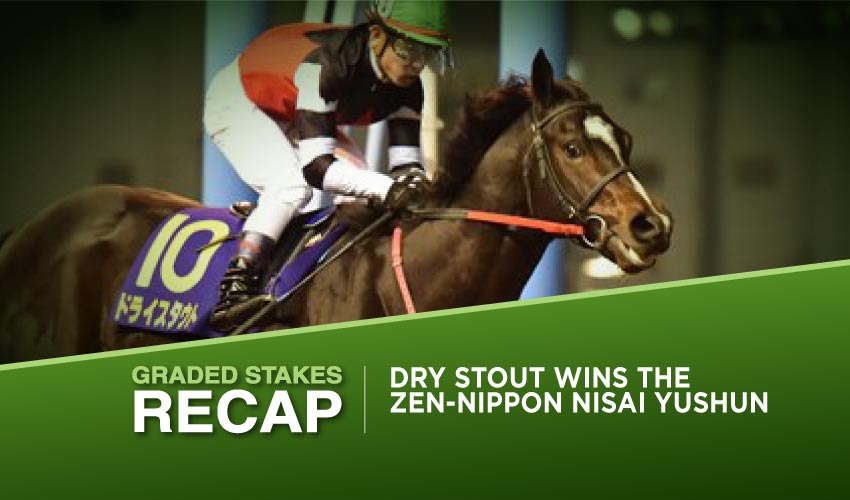 Wednesday’s card at the Kawasaki Racecourse brought the second leg of Japanese Road to the Kentucky Derby as the Listed race offered 20 points for the winner. As none of the participants of the first leg, Cattleya Stakes, travelled to the track to compete in the Zen-Nippon Nisai Yushun held at the distance of a mile, only newcomers to the scene clashed here with exciting prospect Dry Stout stealing the show unquestionably.

By the Zen-Nippon Nisai Yushun success he not only stated he’s class apart of his rivals, Dry Stout also ascended to the first place of the Japanese Road, leaving the winner of the Cattleya Stakes, Consigliere, in second.

The second leg of the Japanese Road to the Kentucky Derby resulted in a clear display of the raw ability of Dry Stout (11-1) trained by Mitsunori Makiura. Among two-year-old horses, the bay colt easily covered the distance of a mile in second place, upon which he surged to the lead, drawing clear from the rest of the field in the final stretch to score the Listed dirt race with the purse of 71,400,000 Yen. Basically, nothing was stopping him from the start as Dry Stout broke away sweetly from the outside gate and piloted by Keita Tosaki; he travelled smoothly throughout the race to win it in an impressive fashion in 1:39:2.

The set pace was utterly devastating for most of the participants; still, Dry Stout managed to profit from it and rally powerfully to the wire, which he crossed with the advantage of 2 and a half of a length, maintaining his unbeaten record after bagging two victories at Chukyo and Tokyo. The only other contestant who was capable of catching somebody’s eyes thanks to his finish was Combustion (11-1), finishing from the midpack, yet he was too distant from the winner to actually challenge him, and therefore, he had to settle for a second place like last time out. Outsider Prealude (33-1) came for third but lost to second Combustion by abysmal five lengths.

When mentioning Combustion, he finished second in his previous start; beating bettered also by Sekifu (7-1); however, he repaid him this time as Sekifu was only fourth with S’Il Te Plait (60-1) running in fifth. The preferred trio of participants, sixth Kaikano Kiseki (3-1) – eight Nudge (7-1) – 13th Marine Sky (3-1) together with interesting Ice Giant (12-1), had nothing remarkable to offer and didn’t snatch any point for the Kentucky Derby at all.