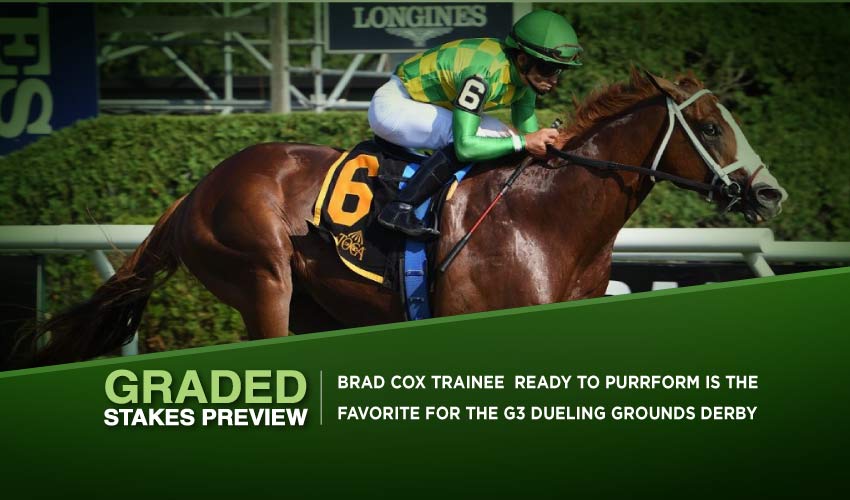 The Kentucky Downs Race Course programme continues on Sunday with a couple of interesting races for three-year-olds. A classy company of fillies aims at the Dueling Grounds Oaks, where the G2 victress New Year’s Eve finds her primary opponent in another G2 scorer, Turnerloose. The G3 Dueling Grounds Derby attracted fourteen colts and geldings, including smart Ready To Purrform.

The purse of $500,000 lured in a field of sixteen (four of them are also eligible to run) three-year-old fillies who will cover the distance of a mile and two and a half furlongs. On the turf surface, New Year’s Eve (3-1) is currently the leading chance of the Listed event.

The Brandon Walsh trained chestnut has six outings under her belt as after bagging a maiden and an Allowance victory, she finished third at the black-type scene, upon which she recorded her only Graded win in the G2 Edgewood Stakes in May. New Year’s Eve usually travels at the rear of the field, which also happened back then; however, she managed to improve her position in time, so upon hitting the final stretch, the chestnut filly was already leading the pack.

Subsequently, she failed to draw on that performance in the G1 Belmont Oaks Invitational Stakes, and last time out, the Kitten’s Joy daughter showed up in the G3 Saratoga Oaks in August. After receiving a bump at the beginning of the race, she took only third place.

Still, her Edgewood Stakes effort was so brave, that she must be considered for the Listed race. Together with California Angel (12-1) and Vergara (6-1), she carries the biggest weight here, but it shouldn’t entirely stop her. It’s more likely that she’ll miss the victory due to her running tactic.

Mentioned Vergara is trained by Graham Motion and has one black-type success to her, which she achieved in 2021. She hasn’t recorded another triumph since, but in August, Vergara finished a close second in the G3 Ontario Colleen Stakes. A drop in the class should help her, and that also applies to California Angel, a G2 victress from 2021.

Still, the main rival for the favorite is somebody else – the Brad Cox bound Turnerloose (7-2), who bagged a Listed as a two-year-old and placed at the G1 scene. In 2022, the daughter of Nyquist delivered in the G2 Rachel Alexandra Stakes, and even though her other following attempts on the dirt surface didn’t go superbly, she did well in her return to the turf in August.

Back then, Turnerloose settled in fifth and showed a finish that was enough to grab second place. The distance suits her. Skims (5-1) and Catiche (10-1) look ready to snatch up a fine place here as both of them have already earned some money at the Graded stage; moreover, they will carry smaller weights than their mentioned rivals.

New Year’s Eve, who should be in form and classy enough to strike gold. The question is whether her racing tactic won’t cost a victory, but that’s something only Sunday will answer.

Fourteen three-year-old colts and gelding will vie for the purse of $750,000 in this G3 turf held over the distance of a mile and two and a half furlongs. The favorite is with trainer Brad Cox as Ready To Purrform (3-1) has already scored a G2 victory.

He started off his career with a maiden win in 2021, then delivered also at the black-type stage, and after amassing two places in Listed in 2022, he aimed at the G2 National Museum of Racing Hall of Fame Stakes at Saratoga.

In August, Ready To Purrform received a bump at the start, but upon settling at the front, he didn’t allow any of his rivals to pass him by at any given moment. In the final stretch, the son of Kitten’s Joy held the rest of the field at bay and recorded a decisive victory due to which he’ll carry the biggest weight on Sunday, together with two other colts. He should handle it, though.

Grand Sonata (5-1) is one of the big weight-carrying participants. The Todd Pletcher trained bay has bagged triumphs at the Listed and G3 stage in 2022, and after two other places among solid horses, Grand Sonata tried his luck in G1.

He defined the odds in the Belmont Derby and finished a very close fourth; however, his performance in the Saratoga Derby didn’t go as well. He was only eighth, but he looks like a place contender on Sunday.

According to the odds, Double Clutch (4-1) is the second chance here behind Ready To Purrform to whom he succumbed in the G2 National Museum of Racing Hall of Fame Stakes. Back then, he got bumped at the start and didn’t entirely recover; however, he bettered the favorite in their previous outing at the Listed level.

Double Clutch carried a small weight, which happens again on Sunday, so he may turn the tables on Ready To Purrform. Moreover, he has only four starts under his belt and, therefore still open to some improvement, which also applies to Running Bee (6-1).

The Chad Brown bound colt has run only three times and recorded two second places in maidens and an impressive victory in August. The last couple to mention comprises Dripping Gold, an Allowance placed colt who could be a pretty smart one, and Kitodan (10-1), who has achieved two black-type wins.

Double Clutch who should enjoy the trip and catch Ready To Purrform this time around. Running Bee could also run well here.