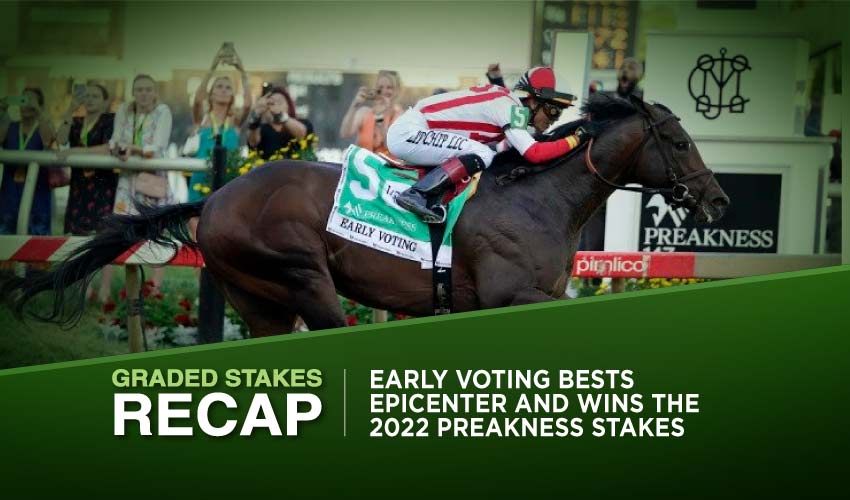 Prudence and patience got their due reward at Pimlico on Saturday, when the Preakness – the second leg of the Triple Crown – was won in decisive fashion by Early Voting, who had been taken out of the Kentucky Derby on account of his inexperience to wait instead for this opportunity. It was the second Preakness win for trainer Chad Brown and the first for jockey Jose Ortiz. The favorite Epicenter was runner-up after getting behind in the early stages.

It’s not all about the Kentucky Derby, although in the frenzy of the build-up it’s easy to believe otherwise. No, it’s all about what’s best for the horse, and Chad Brown’s cool-headed, dead-aim policy of patience with Early Voting paid off handsomely when the colt strode to victory in the Preakness – the second jewel in the Triple Crown – at Pimlico on Saturday.

Early Voting had earned his place in the Derby field when runner-up in the G2 Wood Memorial on his third start, but Brown considered him too inexperienced for the helter-skelter of Churchill Downs. The Preakness thus became the plan, and Early Voting – the 5-1 third-choice – played his part to perfection, sitting behind the pace, driving to the lead of the turn, and digging in hard to turn back the rail run of the 6-5 favorite Epicenter to win by a length and a quarter, stopping the clock in 1:54 and one-half.

New shooter Creative Minister was third, two and a quarter lengths back, with the filly Secret Oath fourth.
“This race is a dream come true for any rider,” said jockey Jose Ortiz, winning his first Preakness. “When I took a look back at the three-eighths pole I couldn’t believe it. We were going nicely, I was very happy with our position. Missing the Derby really paid off.”

Not for the first time. Five years ago Brown pulled the same trick with Preakness winner Cloud Computing, so to repeat the dose with Early Voting was further vindication for his methods. Both horses are owned by Baltimore native Seth Klarman, who was celebrating his 65th birthday on Saturday. What do you give a billionaire hedge fund investor who has everything? A Preakness winner.

“It was a brilliantly executed plan by Chad and Jose,” said Klarman. “It’s hard to think of a better birthday. This sport has a lot of ups and downs but the ups are incredibly sweet.”

Brown’s patience was mirrored by Ortiz, who allowed the longshot Armagnac to set the fractions, a role usually adopted by Early Voting. The pace was far less frenetic than the burn-up in the Derby, and Early Voting was always traveling sweetly while Epicenter, who had been squeezed out on leaving the gate, always looked slightly out of his comfort zone.

The well-fancied Secret Oath made a looping move on the outside around the turn but it soon fizzled out, and by then Early Voting was on his way home. Epicenter finally hit top gear through mid-stretch but it was too late, and the Derby runner-up became the first to fill the same position in the Preakness since Bodemeister in 2012.

The Belmont Stakes is not on the agenda for Early Voting, a son of freshman sire sensation Gun Runner, and he will instead be pointed to the G1 Travers – the Midsummer Derby – at Saratoga on August 27.
“I don’t think he will have any trouble getting the mile and a quarter,” said Brown, the man with the plan. “I grew up 20 minutes from Saratoga, so that’s at the top of the list.”

Stay tuned for the latest Belmont Stakes Odds. Check out the World’s major Racetrack entries,  Horse Racing Results and don’t forget to Sign-up and get up to a 10% horse rebate. We offer the best promotions

Follow us on Social Media for instant Early Voting, and Triple Crown updates!