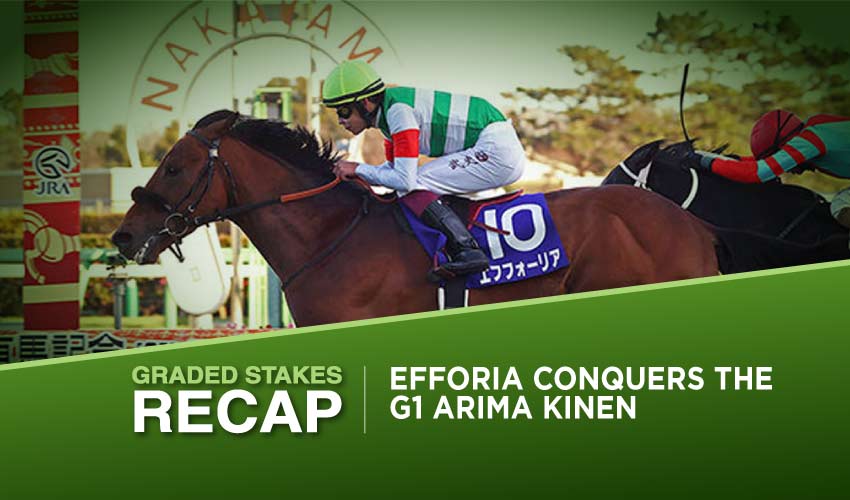 Sunday’s card at the Nakayama Racecourse in Japan saw a thrilling finish of the G1 Arima Kinen, which belongs among the most treasured and anticipated races not only in Japan but also around the world as it usually attracts Horse of the Year title candidates.

The 2021 edition was no exception as brilliant mare Chrono Genesis headlined the event with numerous strong three-year-old rivals attempting to challenge her in her attempt of becoming a back-to-back winner, while Classic winner Efforia was the one to take better of the mentioned grey.

The G1 turf race was held at the distance of a mile and four and a half of a furlong as with the purse of 574,800,000 Yen, the popular treat at the end of the year welcomed a field of 16 three-year-old and older horses. At first, five-year-old Chrono Genesis (19-10) trained by Takashi Saito was perceived as the leading chance given she scored the race in 2020 and added another G1 to her record in June, however, she travelled to France in autumn, which could’ve cost her some energy, so in the end, three-year-old Efforia (11-10) started off to the race as a favourite.

The Yuichi Shikato bay, piloted by Takeshi Yokoyama, galloped in the midfield together with Chrono Genesis but as he was running on the outside, he had no issues with space when turning for home. In the final stretch, the son of Epiphaneia unfolded his finish, closed on the currently leading Titleholder (92-10), and as soon as he prevailed in the short fight for the victory with underestimated Deep Bond (199-10), he bagged his third G1 win in 2m 32.00s. By ¾ of a length, he was followed home by Deep Bond with Chrono Genesis running in third as she seriously struggled with a lack of space since the final turn. Still, she put up a great effort in her final performance when he bettered consistent three-year-old Stella Veloce (69-10) in fourth and the St. Leger winner Titleholder in fifth.

Thanks to the emphatic win, Efforia cemented his position as one of the leading chances for Horse of the Year honours. The bay has six starts and five victories under his belt, losing only in the Japanese Derby by a small margin. Besides the 2000 Guineas and Arima Kinen, Efforia struck gold also in the G1 Tenno Sho where he left Contrail behind, who could be another candidate for the title, yet it’s true that Contrail won only the Japan Cup; otherwise, he got beaten in this year’s endeavours. And with Contrail, Loves Only You, Gran Alegria, and also Chrono Genesis being retired, Efforia could easily become the horse everybody’s looking forward to seeing compete in the next season.