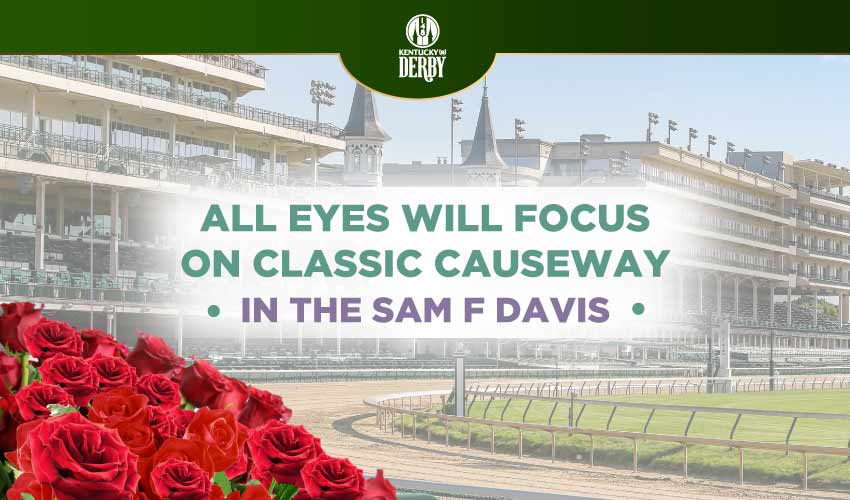 There could be Kentucky Derby pointers in store on the east coast and the west coast on Saturday, with Grade 1-placed Classic Causeway the big name in the Grade 3 Sam F Davis at Tampa Bay Downs, and Grade 1-placed turf runner Mackinnon trying something new on the all-weather surface at Golden Gate Fields in the ungraded El Camino Real Derby.

The value of collateral form will be put to the test in the Sam F Davis, the main event at Tampa Bay Downs on Saturday and a ten-point pitstop on the Road to the Kentucky Derby, which journey, going on number of races, has reached the halfway point.

Following the impressive success of White Abarrio in last week’s Holy Bull, all eyes will focus on Classic Causeway, who finished two and three-quarter lengths ahead of that leading Derby hope when they ran second and third behind Smile Happy in the Grade 2 Kentucky Jockey Club at Churchill Downs in November. That form is almost as good as it gets at this stage and it gives the son of Giant’s Causeway solid credentials in this company.

On Classic Causeway’s previous start he chased home Rattle N Roll in the Grade 1 Claiborne Breeders’ Futurity at Keeneland, more top-rank form, and although he has yet to win a stakes the wait could soon be over. Howling Time was fifth in the Kentucky Jockey Club after setting the fractions, five and a half lengths behind Classic Causeway, and may be seen to better effect when racing away from the pace, as was the case for his two earlier victories.

The sole Graded-stakes winner in the field is God Of Love, who heads a trio of runners from trainer Mark Casse. His victory in the Grade 3 Grey on Woodbine’s all-weather surface may not translate all that well to this tougher test, but at the moment he has achieved more than barnmates Golden Glider, unbeaten in two and coming off an allowance optional claiming win here over the extended mile, and Volcanic, winner of a Gulfstream Park maiden over a mile in which the first two home pulled a long way clear of the third.

Perhaps a more potent threat to the favourite will be Make It Big, three-for-three with two stakes scores to his name. He won well over seven furlongs at Gulfstream from Lightening Larry, a stakes winner himself since then, and then stepped up on that to win at Remington Park over a mile, showing plenty of grit and resolve to get the job done by a half-length. This requires more but he looks capable of more.

Two victories in stakes at Belmont Park mean Shipsational comes here bidding for a three-timer, and his tactical versatility – he has won from off the pace and when on the lead – is a plus, although a layoff of three and a half months may not be. Stakes debutant Trademark is also on a hat-trick after two wins over today’s distance at Churchill Downs and could be a pace factor from his midfield post.

Another strand of collateral form that binds in Classic Causeway comes through Strike Hard and Mr Rum Runner, who were second and third, more than seven lengths apart, behind Holy Bull runner-up Simplification in a stakes at Gulfstream on New Year’s Day. That connection gives both horses plenty to find, although Strike Hard was odds-on that day, could have been a little below par, and may be of interest to exotics players.

Betting Prediction for The Sam F Davis has drawn a deep field, but if formlines mean anything then CLASSIC CAUSEWAY must be the choice after splitting Smile Happy and White Abarrio last time.

On the other side of the country, at Golden Gate Fields, there’s a different opportunity – ten RTKD points available in Saturday’s El Camino Real Derby as well as an automatic spot in the Preakness for the winner, a path followed successfully last year by Rombauer.

The odds-makers appear to think that this is a three-horse race, with the warm favourite being turf runner Mackinnon, who continues his voyage of exploration of track surfaces after turning in only a fair effort when fourth in the Grade 3 Sham over the main track at Santa Anita last time out.

Last year, Mackinnon won three races on the weeds – including two stakes – and ran third in the Breeders’ Cup Juvenile Turf. Opportunities for three-year-old turf runners are not abundant, hence the shift in focus, but Mackinnon now gets a synthetic surface for the first time and there’s no guarantee that’s what he wants either. Barnmate Del Mo broke his maiden at the fourth attempt here over a mile on the all-weather, so has useful experience of underfoot conditions.

Another with previous is Boise, who won a stakes here on the Tapeta over a mile in December – Dr Pescado rallying gamely for third, a length and a half back, and C’mon Man a nose away fourth when closing fast – but never showed up in a turf stakes at Santa Anita last time out. Both Boise’s wins have come at Golden Gate and he’s likely to bounce back from that lacklustre effort on his return ‘home’.

Bob Baffert won this race two years ago with Azul Coast, and puts Blackadder in the gate after he got off the mark at the third time of asking at Santa Anita in December, getting the job done at a mile on the main track. Baffert’s horses are in flying form and Blackadder will be ready to move up.

Stormy Samurai and Unraptured have similar profiles, with a maiden win here followed by a last-time-out score in an allowance optional claimer on the all-weather, Stormy Samurai over six furlongs and Unraptured over a mile against just two rivals. More is needed now but both are heading in the right direction.

Join us at Jazzsports and make sure to stay tuned for the latest fixed horse racing odds. Kentucky Derby Future Book and racing entries.