Epicenter is the first horse to claim his Kentucky Derby Ticket 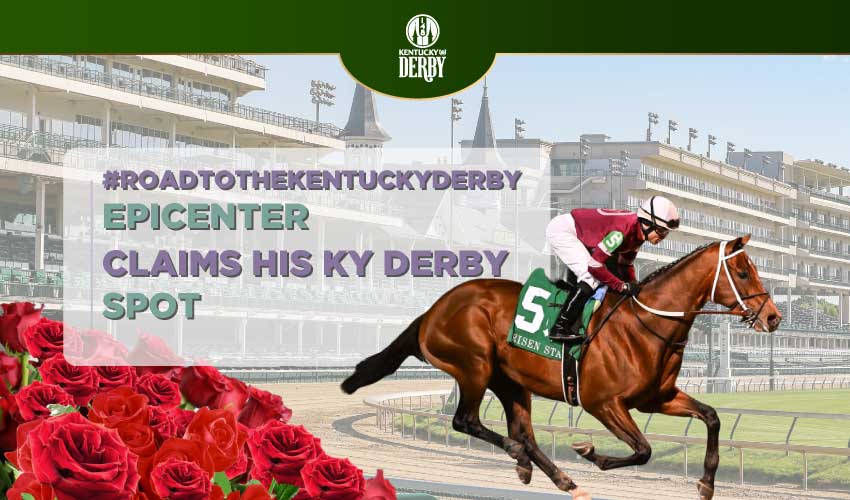 Just over ten weeks remain until the field leaves the gate for the Kentucky Derby, and now we know the first horse to claim his place in the ‘Roses’. Epicenter clinched his spot with victory in the Risen Star last weekend, and practically every week for the next two months more horses will reach the crucial points threshold and join him in the gate. Here we take our weekly look at the latest developments in the build-up to America’s greatest race.

One down, 19 to go. Epicenter became the first horse to book a slot in the Kentucky Derby when running out an impressive winner of the Grade 2 Risen Star at the Fair Grounds last weekend, taking his ‘Road’ points to 64, which will be sufficient for him to qualify for the big event at Churchill Downs on May 7.

Forty points is a general benchmark to make the final field but it can be less than that, so Risen Star runner-up Smile Happy – who already has 30 points – may already have done enough to secure his place. There will be many twists and turns on the ‘Road’ before the bell rings for the first leg of the 2022 Triple Crown, but at last we are beginning to see a little clarity in the picture.

Epicenter (8-1), a Not This Time colt trained by Steve Asmussen, who has never won a Derby, is a strong candidate for the Kentucky Derby given that he put away a quality field with some ease, leading throughout and rolling home by two and three-quarter lengths, easing down under Joel Rosario. We know he goes a mile-eighth in comfort, we know his early speed and freewheeling style should keep him out of the inevitable early trouble in the Derby, we know he has the class required to win the hottest prep of the year so far.

We also know that he won his maiden at Churchill Downs over a mile, so he has valuable experience of the track surface. Epicenter has ticks in many of the right boxes and is due to have his final prep for the Derby in the $1 million Grade 2 Louisiana Derby on March 26, back at the Fair Grounds where he is already two-for-three.

That’s not to say, though, that he has nothing to fear from those behind him last weekend. The runner-up Smile Happy (15-1) is no longer unbeaten or the future-book leader, but he was certainly not disgraced and will move forward from his first outing in almost three months. He was given a patient ride by Corey Lanerie and only really got running in mid-stretch, where he split horses and kept on well to the wire. It was an encouraging performance from Kenny McPeek’s colt and one that kept him firmly on the Derby trail, although his next target has yet to be confirmed.

Third-placed Zandon (22-1) had an even worse trip than Smile Happy, as he bunny-hopped out of the gate and raced out the back until coming with a strong run through the stretch to finish just a half-length behind the runner-up. Zandon has yet to win a stakes but on this showing is a major contender for trainer Chad Brown, and will bid to seal his spot in the Derby in the $1 million Grade 1 Blue Grass at Keeneland on April 9.

The trifecta horses all enhanced their Derby claims considerably. Behind them, longshot Pioneer Of Medina, yet another Derby possible for trainer Todd Pletcher, ran particularly well on his stakes debut – a hot spot to start, for sure – to finish fourth, only losing out on second spot in the last sixteenth after chasing Epicenter all the way around the track. He’ll get another chance with that colt in the Louisiana Derby.

As some move up, some move down, and supporters of Slow Down Andy (50-1) and Pappacap (60-1) had nothing to take from the Risen Star. Slow Down Andy – fresh from a defeat of leading Derby possible Messier at Los Alamitos – never got into the race at any stage, racing mid-division throughout and finding little in the stretch before finishing sixth.

With that Messier form still in the mind, Slow Down Andy is probably worth another chance to see if he can bounce back, but Pappacap may be done. He raced close to the pace before stopping to nothing in the lane, finishing eighth, and only lent further weight to the opinion that the Breeders’ Cup Juvenile is a throwout race, certainly in terms of the Kentucky Derby and possibly in all cases. Maybe the west-coast form doesn’t cut it this year.

In point of fact, there are actually only 18 places in the Kentucky Derby available at present for US-trained horses, as the ‘Road’ winds around the world, offering one place each for horses trained in Europe and Japan. It is distinctly unlikely that there’ll be a European runner, but there has been a Japanese-trained horse in the Derby in two of the last six years and it is not out of the question that there’ll be another this year.

The points leader in Japan is Combustion, who reinforced his claims last weekend with a gutsy victory in the Hyacinth Stakes over a mile at Tokyo racecourse. The Discreet Cat colt got a dream run through on the rail and turned back the late thrust of Geraldo Barows to score by a neck, although what the form stands for on a wider scale is anyone’s guess.

Combustion evidently has ability, but has not been nominated to the Triple Crown, although paying the supplementary fee would not alarm his owner Godolphin. The final pitstop on the Japanese ‘Road’ is the Fukuryu Stakes at Nakayama over a mile-eighth on March 26, which offers enough points for its winner to top the standings, so there is still plenty to play for.

Should no Japanese or European contender travel to Churchill Downs, the places in the gate will of course revert to the 19th and 20th US-trained horses in the RTKD standings.

The next step along the ‘Road’ comes on Saturday at Oaklawn Park, where a big field goes to the gate for the $1 million Grade 2 Rebel over a mile-sixteenth.

The morning-line favourite is the Bob Baffert-trained Newgrange (20-1), although the usual circumstances dictate that he cannot accrue qualifying points and is therefore of no interest regarding Derby qualification. Among those rivals prominent in the future book are Chasing Time (25-1), who makes his stakes debut, and Barber Road (40-1), who was runner-up to Newgrange in the Grade 3 Southwest over course and distance a month ago.

It is likely that the Rebel will have no great impact on the Kentucky Derby scene as it lacks the depth of other prep races, although any winner bar Newgrange will nevertheless pick up 50 points and be assured of a place in the gate for the big race.

The Louisiana Derby, already mentioned as the next place to see Epicenter and Pioneer Of Medina, is also the expected target for Grade 3 Lecomte winner Call Me Midnight (50-1), who ran down Epicenter in the last gasp to win by a head in that mile-sixteenth contest.

Another pencilled in for the Fair Grounds is Smile Happy’s barnmate Rattle N Roll (15-1), who hasn’t been seen since winning the Grade 1 Claiborne Breeders’ Futurity at Keeneland at the beginning of October. Rattle N Roll will first take in the Grade 2 Fountain of Youth at Gulfstream Park on March 5, which is likely to draw a number of horses in the upper reaches of the future book.

The shortest-priced of these is Emmanuel (17-1), unbeaten in two with his most recent victory coming in an allowance optional claimer over a mile at Tampa Bay Downs a month ago. He may make his stakes debut against Grade 3 Holy Bull runner-up Simplification (40-1), who could renew rivalry with Holy Bull seventh Tiz The Bomb (60-1) and eighth Giant Game (65-1). Howling Time (75-1), last seen when fifth behind Smile Happy in the Grade 2 Kentucky Jockey Club at Churchill Downs in November, is another possible.

Holy Bull winner White Abarrio (17-1) is likely to wait for the $1 million Grade 1 Florida Derby at Gulfstream Park on April 2, which offers its winner 100 RTKD points, as does the Louisiana Derby.

Italics: horse assured of a run in the Kentucky Derby on RTKD points basis

Follow us on Social Media for instant Road to the KY Derby & Epicenter updates!