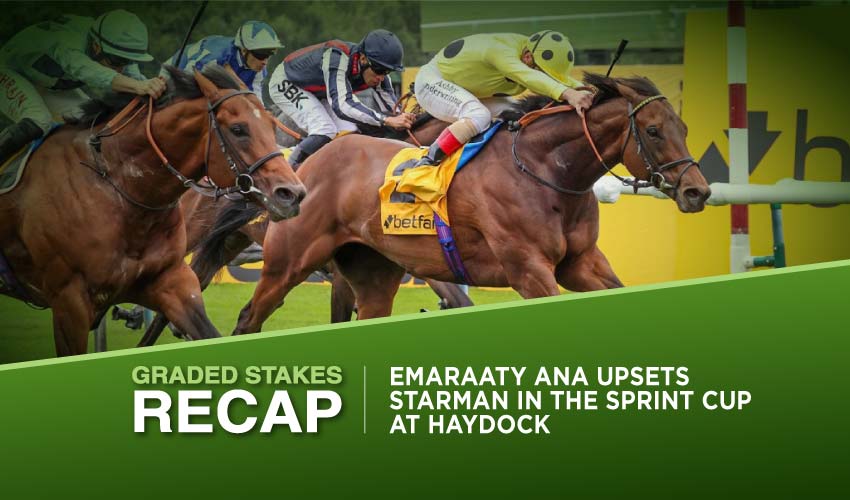 The European racing schedule promised some mouth-watering clashes over the weekend with Starman bidding for his second G1 success, but he just failed to deliver in the Sprint Cup at Haydock as Emaraaty Ana denied him the victory. Baaeed then managed to live up to the expectations by scoring his first G1 win in Prix du Moulin at Longchamp, Paris.

The prestigious sprint over 6 furlongs with the purse of £225,000 had its hot favorite in Starman (2-1) trained by Ed Walker, but the four-year-old colt was just denied his second G1 victory. In the field of 11 three-year-old and older horses, Art Power (19-2) was the last to enter the gate and the first out, leading the pack on the turf surface, while Starman raced in midfield, waiting to unfold his finish. However, when Tom Marquand aboard asked Starman to quicken up, the large bay struggled to keep pace with Emaraaty Ana (12-1), running smoothly next to him and taking command from Art Power.

It was never easy for Emaraaty Ana as firstly, he had to hold off Art Power, and then Starman attacked from the outside, but Kevin Ryan bound gelding was all heart and won by a short head in 1m 9.10s. With luck on his side, five-year-old Emaraaty Ana drew on his fine second place in the Nunthorpe Stakes last time out, finally repaying his team the wait as it’s been more than three years since the Shamardal’s son scored a Grade victory. Struggling with poor health, the bay finally had a deserved moment in the spotlight.

Conversely, Starman disappointed a bit, though; taking second place at the G1 scene for the second time in a row isn’t a shame. Chil Chil (23-1) finished to the third place with Happy Romance (26-1) being stuck for a while, still, managed to grab the fourth money before Art Power. Closely watched Creative Force (7-1) stumbled at the start and didn’t recover from it properly.

€270,000 was up for grabs in the Prix du Moulin over a mile, where a field of six three-year-old and older horses clashed on the turf surface. The G1 race attracted several G1 winners; however, favorite Baaeed (1-2) was about to compete among the elite for the first time. The talented William Haggas bound son of Sea The Stars has caught the eye at lower levels, boasting such raw ability he was expected to shine at the highest level anytime he’s pointed there. And so he did.

Baaeed, piloted by Jim Crowley, had a smooth run in third/fourth place at Longchamp, and as soon as he was asked to quicken up, he switched to another gear and charged for the first place. Order of Australia (31-5) fought back bravely but just couldn’t prevent Baaeed from scoring his first G1 success, and the future will tell what great things this three-year-old colt can achieve.

Winning by a length and a quarter in 1m 39.13s, Baaeed crossed the wire before Order of Australia in second and Victor Ludorum (68-10) in third. Victor Ludorum was the only French-bound horse of the race and probably enjoyed more the good to the soft ground than Snow Lantern (54-10), who didn’t rally at all and finished fourth.

Follow us on Social Media for instant European Racing updates!