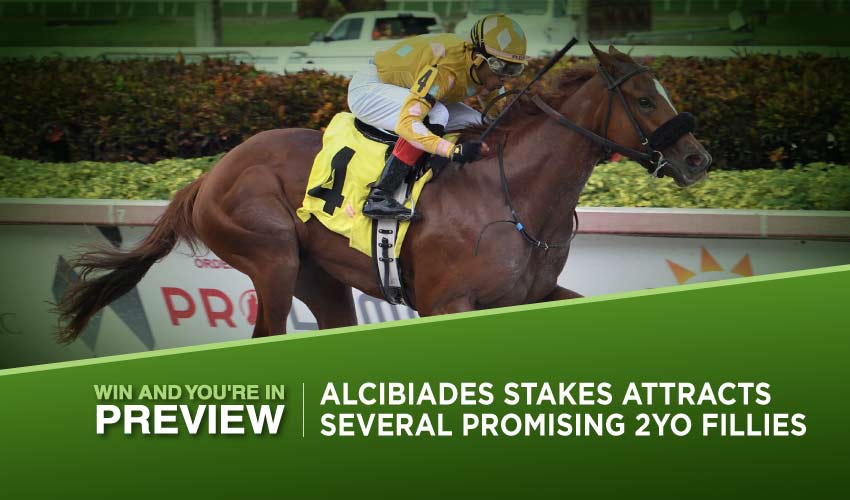 Keeneland Race Course opens up with its ‘Fall Stars Weekend’, a three-day extravaganza with Breeders’ Cup hints everywhere you look. Friday’s feature brings several promising two-year-old fillies together for the Grade 1 Alcibiades, while the highlight of the undercard is the reappearance of the speedy Special Reserve in the Grade 2 Phoenix Stakes.

Bettors looking for a foothold in a very open Alcibiades could do worse than start with trainer Kenny McPeek, who has won the opening-day feature at Keeneland five times and has two shots at making it six on Friday in this ‘win-and-in for the Breeders’ Cup Juvenile Fillies.

His Ellis Park maiden winner Mama Rina (12-1) moved up to the Grade 3 Pocahontas at Churchill Downs last time, over today’s distance, and belied her longshot odds when chasing home Hidden Connection, albeit nine and a quarter lengths behind that classy filly. It’s hard to be exact about the value of that form, and McPeek’s other runner Penny Saver (4-1) appears the barn’s first choice.

The daughter of Super Saver got off the mark at the third time of asking when ripping apart a Churchill Downs maiden two weeks ago, going gate-to-wire at today’s mile-sixteenth to win by nine and a half lengths, looking more than ready to move up in class. It’s a swift return but the wave is there to ride.

Brad Cox is also doubly represented, with morning-line favorite Juju’s Map (5-2) leading the charge. She did to an Ellis Park mile maiden what Penny Saver did at Churchill Downs, this time to the tune of five and three-quarter lengths. Barnmate Matareya (4-1) also broke her maiden at Ellis Park, cruising away on debut to score by four and a half lengths, and now goes an extra quarter-mile here.

Both fillies hold a fair claim, as does Distinctlypossible (8-1), who split next-time-out Frizette second and third Gerrymander and A Mo Reay when runner-up on her Saratoga debut. This is a big jump in class for a maiden but she shouldn’t be ignored.

Runup (12-1) wired a stake over a mile at Monmouth Park for a three-length score and will be another pace factor, although that victory was accomplished in a slow time. A better option for those looking to cover the board could be Diamond Wow (8-1), who is unbeaten in two starts, both at Gulfstream Park, the most recent of them in stakes over seven furlongs with the third horse 12 lengths adrift. The third-stakes winner in the field is Miss Interpret (10-1), who collected a four-runner affair at Saratoga that was taken off the turf; third-placed Sail By won the Grade 2 Miss Grillo at Belmont Park last week.

There is a Graded-stakes form to consider too. Myfavouritedaughter (30-1) was fourth in the Grade 1 Del Mar Debutante behind Grace Adler, but that form has been proved to be very unreliable. Sequist (30-1) and Dream Lith (15-1) were fourth and fifth in the Grade 1 Spinaway at Saratoga, but a long way behind the magnificent Echo Zulu. Out-the-back form such as that should never be taken as gospel, and their previous maiden wins leave them with plenty to find here.

Pipeline Girl (20-1), a narrow winner at Churchill Downs on her debut, failed to improve on that when third on turf at Kentucky Downs and it’s hard to make a case for her.

Any one of five or six fillies could win the Alcibiades without raising an eyebrow, but PENNY SAVER is the choice after her deeply impressive maiden win at Churchill Downs.

Trainer Mike Maker has transformed Special Reserve (9-5) this year and it’s easy to see why the five-year-old is the morning-line leader in the Phoenix, a ‘win-and-in’ for the Breeders’ Cup Sprint at Del Mar next month.

Special Reserve has hit the board in all six starts of 2021, winning four times including the Grade 3 Maryland Sprint Match at Pimlico in May. His ascent through the ranks was underlined at Saratoga in July, when he beat all bar longshot Lexitonian in the Grade 1 Alfred Vanderbilt over six furlongs, going down by half a length with the likes of Whitmore and Firenze Fire in behind.

That performance far outdoes anything his rivals have produced, and if he’s ready to rumble after a ten-week break he’ll be hard to stop. His barnmate Endorsed (6-1), on the other hand, is zero-for-seven this year and hasn’t won since May 2020, although he showed signs that all was not lost when runner-up in stakes at Churchill Downs last month on his first start for Maker.

He was three-quarters of a length behind Just Might (9-2), who was taking his winning streak to four, all in stakes races. Just Might has yet to win in Graded company, but that defeat of Endorsed – who is 2lb worse off today – was one of the best runs of his life and he arrives here in obvious good order.

Mucho (6-1) was fourth in the Maryland Sprint Match behind Special Reserve and a head behind Just Might at Colonial Downs last time out, so has something to find here, while Aloha West (3-1) – who didn’t race at two or three – is making up for lost time with two wins in an allowance optional claimers at Saratoga on his last two starts, the first of them over today’s distance.

His sharp recent form entitles him to respect, which also goes for Sir Alfred James (9-2) after his impressive success in an allowance optional claimer at Churchill Downs two weeks ago. He dusted off his rivals by five and three-quarter lengths there and is certainly heading in the right direction.

The only three-year-old in the field is Quick Tempo (20-1), runner-up in a Monmouth Park stakes a month ago. Back in July he was runner-up to Special Reserve in a stake at Prairie Meadows, beaten two and three-quarter lengths, and has a mountain to climb on 7lb worse terms.

Given his solid form overall and his lifetime best last time out when runner-up in a Grade 1, it’s hard to get away from the obvious claims of revitalized SPECIAL RESERVE.

Follow us on Social Media for instant Fall Stars Weekend at Keeneland updates!