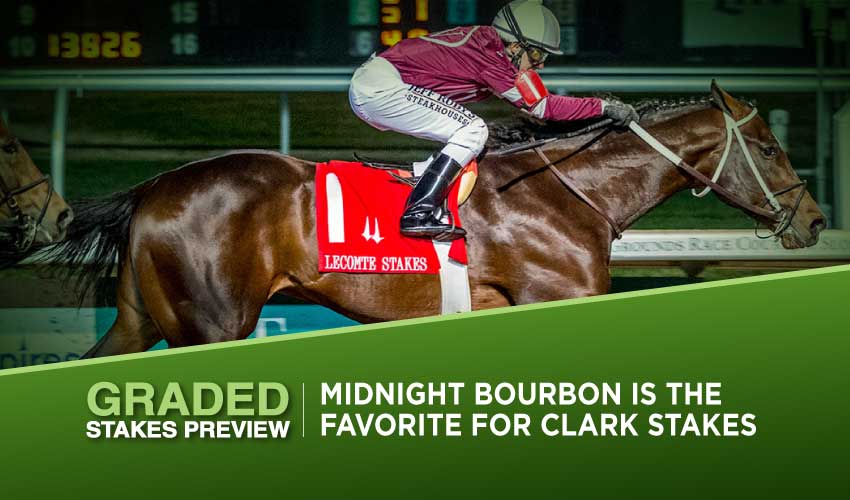 A big weekend at Churchill Downs starts on Thanksgiving Thursday with the Grade 2 Falls City, in which last year’s winner and runner-up Envoutante and Bonny South lock horns again. That’s followed on Friday by the weekend’s highlight, the Grade 1 Clark Stakes, in which the high-class pair Maxfield and Midnight Bourbon lead the way.

The final weekend of 2021 at Churchill Downs kicks off on Thursday with the Thanksgiving feast of the Falls City, in which last year’s one-two make another appearance.

Twelve months ago Envoutante went gate-to-wire to win by six lengths from Bonny South, a performance that seemed likely to be the springboard to even better things in 2021. That hasn’t come to pass, though, with Envoutante winning only one of her six races this year, and although she has never been off the board in six starts at Churchill Downs she just isn’t in the shape she was a year ago.

Bonny South, on the other hand, has blossomed during this campaign, and although her sole victory came five races ago in the Grade 3 Doubledogdare at Keeneland in April, she has hit the board in three Grade 1s – the Ogden Phipps, the Personal Ensign and the Spinster, each time behind the mighty Letruska.

Last time out she was seen keeping on gamely for third in the Spinster, doing all her best work in the closing stages, and on that form she has the beating of fourth-placed Crystal Ball and old rival Envoutante, who was fifth.

That was Crystal Ball’s latest bid to get off the mark at Graded level; she is now zero-for-five, with her only stakes victory coming at Thistledown in June. However, she finished ahead of Envoutante in the Grade 3 Locust Grove here over a mile-sixteenth in September and should be in the mix.

The sole three-year-old in the field is Army Wife, who won a Grade 2 and a Grade 3 in spring and summer and then finished third in two Grade 1s, the Alabama at Saratoga and the Cotillion at Parx Racing. In the Cotillion she finished behind subsequent Breeders’ Cup Distaff fourth Clairiere and recent Grade 3 Chilukki winner Obligatory, so the form is solid – but she also holds an entry at Aqueduct on Friday.

The remaining three runners look out of their depth. Cheetara is a Grade 2 winner in her native Chile and will be a pace factor, but has to step up a long way from her stakes win at Colonial Downs in August. High Regard was behind Cheetara in an allowance optional claimer at Keeneland last time and has never even won a stakes, which also goes for Audrey’s Time, winner of an allowance optional claimer over ten furlongs here on her latest start.

Last year’s Falls City winner Envoutante hasn’t been in the same form this year so BONNY SOUTH, runner-up 12 months ago, can go one better now back down in grade.

Two horses with plenty to prove go to war in the Clark at Churchill Downs on Friday, the highlight of the final weekend under the twin spires this year. Both have the credentials to win, and both have flaws that suggest they won’t.

For Maxfield, it’s instructive to draw up a list of pros and cons. The son of Street Sense has a perfect record at Churchill Downs, unbeaten in four including two Grade 2s this year, notably the Stephen Foster over this distance in June, and he has never been off the board in ten starts, winning seven.

Okay. But all three defeats came at Grade 1 level this year, in the Santa Anita Handicap, the Whitney and the Woodward, and those Grade 2 wins were gained against pretty moderate rivals. He also possesses a public profile higher than might be expected given the lack of top-rank success on his record, with just one Grade 1 as a juvenile to his name, and so his odds are often shorter than they should be.

No doubt Maxfield has talent – he found only Knicks Go too strong in the Whitney – and it might be fitting were he to sign off his career with a win here, but there’s a lot in that ‘cons’ column.

His main rival Midnight Bourbon also has big questions to answer. He is just two-for-12 lifetime and has been hammering on that Grade 1 door all year without prying it open, finishing runner-up in the Preakness, the Travers and the Pennsylvania Derby. His only victory outside maiden company came in the Grade 3 Lecomte at Fair Grounds in January, and he’s winless in seven since.

Yet he was only a neck behind the top-class Essential Quality in the Travers, pushing him all the way to the wire, and the one thing in his armoury that plays to his advantage here is his preference for being on the lead. Midnight Bourbon is the lone pace angle in the Clark, will have it his own way on the front end, and the in-form Joel Rosario will be able to put the opposition out of their comfort zone.

Midnight Bourbon, as a three-year-old, also gets 5lb from Maxfield, as does fellow sophomore King Fury, who is three-for-four under the twin spires. However, he was a well-beaten third in the Grade 3 Fayette at Keeneland last time – fourth home Night Ops is winless in eight this year, and fifth Militarist has never even hit the board at stakes level – and was never sighted when fifth in the Travers. He’s zero-for-four in Grade 1s, although that course record entitles him to a little respect.

Todd Pletcher sends two to the gate, with Dr Post arguably the pick following his third behind Art Collector and Maxfield in the Woodward at Belmont Park last month. That was a solid effort and he has only a length to make up on Maxfield, but he is zero-for-five in Grade 1s and appeals only for exotics plays. Barnmate Happy Saver already has a top-level score in last year’s Jockey Club Gold Cup on his record, but he hasn’t moved up as expected and was beaten four lengths into second spot by Max Player in this year’s renewal of the Jockey Club Gold Cup, with Night Ops fourth and Chess Chief fifth.

Probably boils down to whether Maxfield can get past front-runner MIDNIGHT BOURBON, who is the choice to stay ahead and gain his first Grade 1 success.