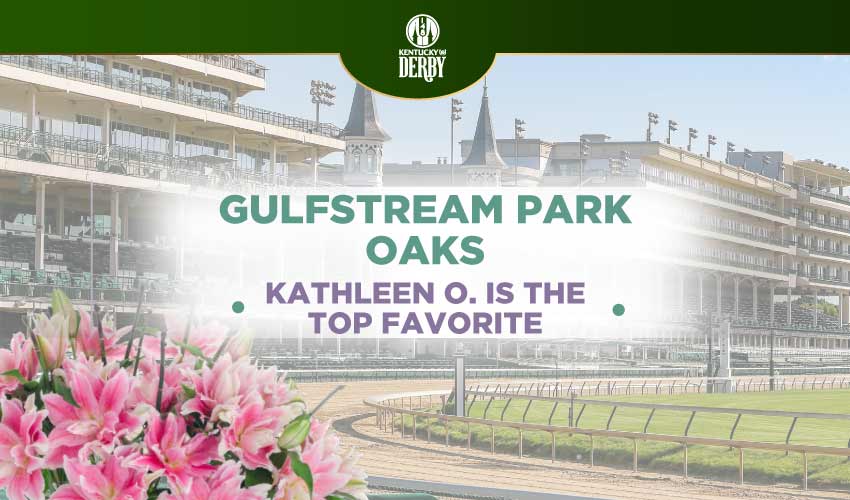 The Kentucky Oaks picture will be a lot clearer after the three preps dotted around the country on Saturday. The big event is the G2 Gulfstream Park Oaks, which is dominated by the unbeaten Kathleen O, while there’s a deeper field – including Bubble Rock, Magic Circle and Dream Lith – for the G3 Fantasy at Oaklawn Park. Both those races offer 100 Road to the Kentucky Oaks points to the winner; there’s 50pts available in the Bourbonette Oaks at Turfway Park.

There are 100 RTKO points on offer to the winner of Saturday’s Gulfstream Park Oaks, the highlight of the stakes-heavy undercard at the Miami circuit, but the odds-on favourite doesn’t need them as she is already assured of a spot in the Kentucky Oaks.

The horse in question in what resembles a match-race is Kathleen O , who is unbeaten in three and progressing fast. She arrives off the back of victory in the G2 Davona Dale here over a mile, when she ran down the leaders in mid-stretch and rolled on for a dominant two-length score from the hitherto unbeaten Classy Edition, backing up the impression she left when demolishing the field in a stakes over the same course and distance on New Year’s Day.

It may not be the best filly form in the book but there looks to be plenty more to come, and with only one serious rival today Kathleen O is a worthy favourite.

The danger is Goddess Of Fire, who hasn’t won since a maiden on debut but who caught the eye when runner-up in the G2 Rachel Alexandra at the Fair Grounds, when she led inside the final furlong but couldn’t hold on, going under by a half-length to Turnerloose, who didn’t exactly put the form in lights when only fourth behind Echo Zulu last week.

It was an easy win for Catiche over course and distance latest, romping by six lengths, but she was losing her maiden tag on her fifth start and although that will boost her confidence, it gives her a long way to move up against Graded opposition. She is also entered at Turfway Park, but if running here is a better option for exotics players than fellow course winner Running Legacy, only fifth in an allowance optional claimer here last time out.

Amani’s Image and Cancel This ran third and fourth in an allowance optional claimer here over seven furlongs last time out, a half-length apart, and along with maiden claimer winner Blustery look out of their depth at this level.

There isn’t a lot standing in the way of the highly progressive KATHLEEN O, who is a winner twice at this track already and the logical choice to stretch her unbeaten record to four.

The scratch of morning-line favourite Eda has stripped a layer of class from the Fantasy, at Oaklawn Park on Saturday, and as a result the advertised odds are no longer representative.

The probable favourite is now Bubble Rock, who won the G3 Matron on turf last year but has since proved very effective on the synthetic surface at Turfway Park, winning a stakes there over a mile last time when driving clear through the stretch for an impressive victory.

This will be her first start on the main track and even though that raises a query, she has more about her than barnmate Mariah’s Fortune , who makes her stakes debut after taking second spot in an allowance optional claimer at the Fair Grounds.

Several of her rivals need to bounce back from heavy defeats, with G2-placed Magic Circle beaten nearly eight lengths into third behind Venti Valentine in a mile stakes at Aqueduct, and Yuugiri dismissed in similar fashion when third behind the very promising Secret Oath in the G3 Honeybee over course and distance.

There is nothing here with the class of those two wide-margin winners, although the progress made by Secret Oath can be seen in the form of the G2 Golden Rod at Churchill Downs in November.

That was won by Dream Lith by a length from Yuugiri, with Secret Oath ten lengths back in fifth, and Dream Lith is another with a last-time-out blot on her record, never getting a look in when sixth behind Turnerloose in the G2 Rachel Alexandra at the Fair Grounds, although she was slightly hampered by an injured horse.

The rest of the field all step up from wins in maidens here – Heartyconstitution over six furlongs, and Beguine and I Feel The Need over today’s distance. Improvement is likely but all three face a stiff task.

Each of the eight runners has a query about them; small stakes are advised and at likely odds DREAM LITH, who may have been a little unlucky in running last time, makes most appeal.

There is a little uncertainty for bettors in the Bourbonette Oaks at Turfway Park, a 50-20-10-5 RTKO points race, owing to the doubly entered Catiche, who may instead head to Gulfstream Park.

If she comes to Kentucky she would be in the mix given her last-time-out six-length maiden win at this distance on the synthetic surface at Gulfstream Park, which suggests she’s ready to move into stakes company.

North County already has a stakes win to her name, at the Fair Grounds in December, but she lost her unbeaten record when seventh in the G2 Rachel Alexandra at the same track last time out, with Candy Raid eighth. She’ll find this easier, as will Mrs Barbara, a G3 winner on the synthetic surface at Woodbine and then fourth in the G3 Florida Oaks on turf at Tampa Bay Downs.

It’s been four months since Sandstone ran third in the G2 Golden Rod at Churchill Downs and Vergara won a turf stakes at Aqueduct, and that pair may not be as sharp as some of these, notably Tap Dancing Lady, who loves the synthetic surface here and ran a decent third behind Bubble Rock (goes at Oaklawn today) in a stakes last time out.

Champagne Poetry was only beaten a nose in a stakes at Aqueduct over seven furlongs and is of interest now stretching out beyond a mile for the first time.

NORTH COUNTY was in much deeper water when losing her unbeaten record in a G2 last time, and this sharp drop in class gives her a good opportunity to return to winning ways.