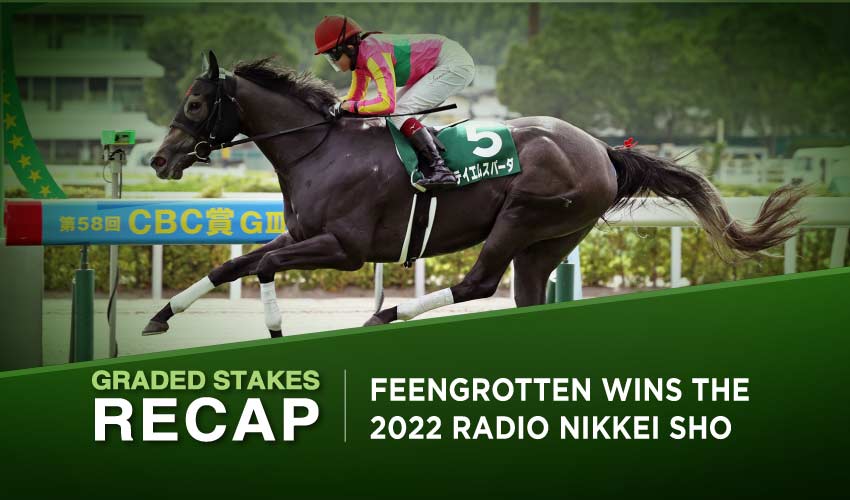 Two G3 races were held at the Japanese tracks on Sunday, while both of them were handicapped. In the CBC Sho at the Kokura Race Course, T M Spada used the smallest carried weight to score when covering the distance of six furlongs; moreover, she broke the duck of three-year-olds in this race. For decades, only older horses struck gold here, but T M Spada was just uncatchable for them. The 2022 Radio Nikkei Sho then saw a narrow triumph of progressive three-year-old Feengrotten who succeeded at the Fukushima Race Course.

The G3 handicap race lured in a field of seventeen three-year-old and older horses who covered the distance of six furlongs. On the turf surface, T M Spada (4-1) used the fact that she was carrying the smallest weight of all and easily scored the 78,150,000 Yen event.

Under Seina Imamura, the three-year-old filly had a great start, quickly took command, and led the field into the final stretch.

Subsequently, she scooted clear from her rivals and recorded her premiere Graded triumph in 1m 5.80s, bettering second Taisei Vision (47-10) by three and ½ of a length. Taisei Vision, the most carrying participants, left third Anegohada (29-10) in third by half a length.

T M Spada, trained by Tadao Igarashi, belonged among the considered contestants not only due to the small carried weight but also because she scored a Stakes race last time out and, therefore, suggested to be in form.

She failed at her two Graded attempts; still, the weight just helped her on Sunday, so her success wasn’t surprising at all. Five-year-old Taisei Vision ran a blinder under Yuga Kawada as he was the most disadvantaged horse in the field, in terms of weight.

He spent the race in the rear but was lucky to have enough room in the final stretch, so he smoothly navigated through his rivals to snatch up second place in time, leaving favorite Anegohada in third.

The second G3 handicap was also held on the turf surface. Thirteen three-year-olds vie for the purse of 76,650,000 Yen over the distance of a mile and a furlong, where Feengrotten (31-5) affirmed his progress by a ¾ victory.

Under Fuma Matsuwaka, the bay galloped in the midpack and gradually improved his position, so when the field hit the final stretch, the Hiroshi Miyamoto-bound bay had a sole task in front of him – to sneak past the fence and better Shohan Magna (19-2).

After a brief struggle, Feengrotten squeezed in the gap, took command, and scored the race in 1m 46.70s. Behind Shohan Magna, Satono Helios (53-10) snatched up third place.

After securing a Listed victory, Feengrotten belonged among respected participants of the Radio Nikkei Sho; however, he was about to mingle with the Graded company for the first time; moreover, he carried one of the most significant weights here.

Still, it didn’t stop him, and the son of Black Tide delivered a gutsy performance, quite strongly enhancing the statement that he is a very promising colt.

Shohan Magna caught most of his rivals off guard with such a bold run, resulting in second place, as only Satono Helios managed to close on him in the final strides when finishing from the midpack.

Follow us on Social Media for 2022 Radio Nikkei Sho updates!