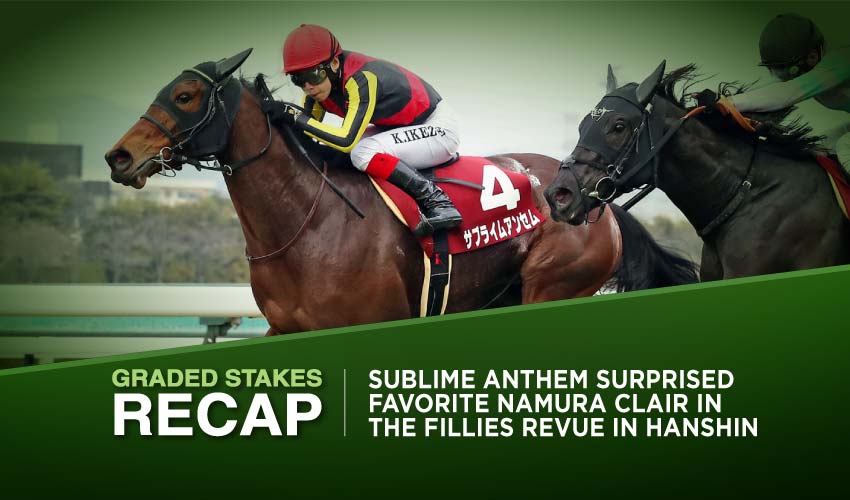 The previous weekend offered three prestigious races at the Japanese tracks, including the G3 Nakayama Himba Stakes, where the Nakayama Racecourse witnessed a huge upset thanks to outsider Kurimo Premium. On Sunday, Jack d’Or put up a bold front-running performance in the G2 Kinko Sho, scoring it easily at the Chukyo Racecourse, upon which Sublime Anthem surprised favourite Namura Clair in the G2 Fillies Revue in Hanshin.

Almost nobody could’ve expected this G3 turf race to result in a tight victory of Kurino Premium (96-1), who covered the distance of a mile and a furlong as one of the biggest outsiders. In a field of 16 four-year-old fillies and older mares, the Shinichi Ito bound mare snatched most of the purse of 72,800,000 Yen when finishing from the outside to bettered second Ablaze (28-1) by a half of a length.

Ablaze didn’t belong among the favorites as well when charging from the midpack, while Miss New York (12-5) spent the race at the fence to attempt fulfilling the role of a favourite in the final stretch, yet she managed only third place. The victorious five-year-old mare Kurino Premium crossed the wire in 1m 46.80s with Masami Matsuoka aboard.

Kurino Premium had sort of an ideal gallop here, sitting in the midfield; still, she had to finish from the outside, which must’ve cost her some energy. In the end, she might’ve won thanks to slight weight advantage over most of her rivals, but also thanks to her fighting abilities; as mentioned Ablaze showed a great turf-of-foot, too. Behind third Miss New York, Slyly (217-10) took fourth, while Terzetto (48-10) was fifth.

Five victories out of five starts on the turf surface – that’s the record of four-year-old Jack d’Or (2-1) who scored Sunday’s 129,040,000 Yen G2 race held at the distance of a mile and quarter, despite facing some tough four-year-old and older rivals.

The Kenichi Fujioka trained chestnut used his early speed to settle at the front, upon which he didn’t allow any of his opponents to head him as he cruised for the victory in 1m 57.20s. Under Yusuke Fujioka, Jack d’Or quickly drew clear from the rest of the field in the final stretch, leaving behind Le Papaile (23-5) by 2 and a half of a length, and while she stalked the leader throughout the race, Akai Ito (168-10) sat more in the midpack, from where she finished snatching the third place.

After bagging a Listed win, Jack d’Or made a great leap forward to win this high-quality field, and we’re looking forward to what this flashy son of Maurice could be capable of. Behind mentioned duo of mares, Potager (77-10) was fourth ahead of last year’s winner Gideon (83-10)

Despite his recent fine efforts, Sanrei Pocket (47-10) didn’t show anything interesting this time, yet it seemed as if his jockey severely underestimated the situation and failed to urge his mount forward in time.

This G2 turf race open to three-year-old fillies was held at the distance of seven furlongs, while the purse of 100,540,000 Yen attracted 15 participants. The preferred filly, Namura Clair (7-10), ran a good race here as she delivered an eye-catching finish from the midpack; however, a considerably bigger rival – Sublime Anthem (69-10) maintained the leadership in front of her.

The Hideaki Fujiwara bound filly also charged for the lead from the midfield, thronged through her rivals, to snatch the first place, so once Namura Clair came to her, she managed to hold her off by a neck. Crossing the wire in 1m 19.90s, Sublime Anthem, piloted by Kenichi Ikezoe, recorded her very first Graded victory.

Behind Namura Clair, who sort of drew of her recent fine results, Anegohada (104-10) was in third place after running quite close to the leader, upon which she took command. Still, she had no answer for the finish of the mentioned fillies who bettered her.

The race, indeed, unfolded more favorably for the subsequent winner as Sublime Anthem didn’t have to cruise the field from the utter outside, but she used her big frame to throng between rivals and pushed herself forward, unlike Namura Clair. The favorite was simply forced to go outside, but her effort was still quite promising for the future.