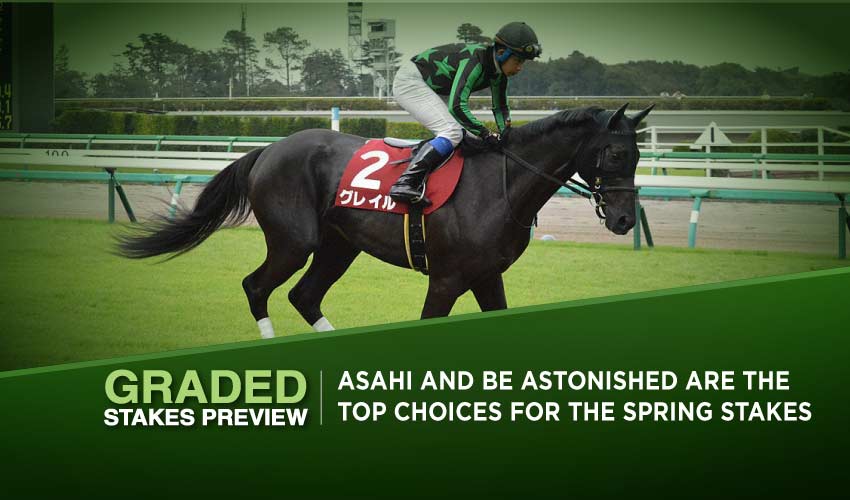 As the Japanese Classic races are approaching, the prominent trial, the Spring Stakes, for three-year-old colts is about to be held at the Nakayama Racecourse on Saturday.

There’s no hot favorite in the field, though, unlike in the Hanshin Daishoten for older horses where Deep Bond should become a back-to-back winner at the Hanshin track. He thrives at the long distances, so a mile and seven furlongs is something he should enjoy once more. On Sunday, the Nakayama Racecourse also offers a race for three-year-old fillies – the Flower Cup.

On Saturday, the most prestigious trial for the Japanese 2000 Guineas takes place at the Nakayama Racecourse, where 13 three-year-old colts will clash at the distance of a mile and a furlong. The turf G2 race ran for the purse of 104,840,000 Yen is quite competitive, attracting some horses with just maiden victories under their belts who are about to meet such a company for the very first time but let’s focus on the participants with some Graded experience.

Although the field features several colts that competed in the G1 Asahi Hai Futurity Stakes, only Al Naseem was close to the fight for the victory as he finished in fourth place. Subsequently, he was second in a Stakes race in February. Dobune ran in seventh in the mentioned G1 after showing a good turn-of-foot, while he looked like he was yearning for a longer trip. With Yutaka Take aboard, he could use gained experience to step up his game properly this time, in other words, to settle closer to the front, rely on his finish, and actually fight for the win.

Asahi was only fifth when running in the G3 Kyodo News Hai as something more was expected of him because he took second place behind talented Equinox in the G2 Tokyo Sports Hai Nisai Stakes. The distance should suit him, but it seems that classier rivals could get better of him again; therefore, Be Astonished is more appealing in this renewal as he was third in that G2 race. Moreover, he’s pretty reliable and hard trying. Solitario and Arrival are both placed at the G3 scene, while Oken Bolt finished second in a Stakes race at even a longer trip.

Our betting pick for the Spring Stakes is:

Be Astonished, who is a reliable specimen who can deliver a fine performance at this stage, but he is not unbeatable here. Unexposed Dobune might run a great race here with placing in mind.

The G2 turf race is run at the ultra-long distance of a mile and seven furlongs, while the purse of 127,700,000 Yen attracted 13 four-year-old and older horses. Deep Bond looks the leading chance here as he’s scored three times at the G2 scene already, including this race in 2021 when he bettered You Can Smile .

The five-year-old horse trained by Ryuji Okubo then went on to run in second in the G1 Tenno Sho, and when he was sent to France, he triumphed in the trial for the Prix de l’Arc de Triomphe, G2 Prix Foy. He failed to impress in the mentioned European feat, but Deep Bond wasn’t finished for the season as he took a fantastic second place behind Efforia in the G1 Arima Kinen. With such a resumé, it’s difficult to picture any other contestant winning the Hanshin Daishoten than the talented Deep Bond.

For the mentioned You Can Smile, last year’s second place came after the seven-year-old horse scored this race in 2020, and it’s fair to say that he’s been showing he’s a G2 horse only in this race in particular. Once again, he needs to be considered, at least for a place. King of Dragon and Manchaon d’Or hinted in their 2022 starts that there was some form about them as they both scored at the Stakes level, while Iron Barrows wasn’t far away from winning a G2 in December when he ran in second. Something similar applies to Silver Sonic .

Our Top Pick for the Hanshin Daishoten is:

Deep Bond, who won the race in 2021, and due to his high class, he should score this again.

The 70,600,000 Yen race is open just to three-year-old fillies who will line up for this G3 event to cover the distance of a mile and a furlong. On the turf surface, 12 fillies are vying for their very first Graded victory, while it’s Stunning Rose who has the most experience with Graded company as she finished third in the G3 Saudi Arabia Royal Cup behind smart Command Line, upon which he ran in fifth in the G2 Daily Hai Nisai Stakes behind Serifos.

When boosted even by a Stakes victory in her 2022 debut, these are not bad credentials. Although finishing only sixth in the G3 Artemis Stakes in October, Scintillating looks interesting for this race as she morphed her first outing of the 2022 season into a narrow victory.

She defeated second Dainty Heart just by a neck; however, Scintillating had to deal with some minor struggles in the final stretch, still, she prevailed quite gamely. Personal High failed to impress in the G1 company in the Hanshin Juvenile Fillies but finished second at the Stakes stage, so she shouldn’t be discarded in this competition.

The field is once again packed with horses with just maiden victories under their belts, so let’s focus on those who scored slightly higher – in the Newcomer races. Christophe Lemaire retakes the ride aboard Tiz Glamorous, who successfully fought for a win in October, and she just looked classy enough to score even among the Graded company, while Kitasan Sugar broke her maiden in a Newcomer race January.

Our Top Choice for the Flower Cup is:

Scintillating, who looked to be enjoying racing in her 2022 debut despite not having a peaceful trip. She should be classy enough to win this; however, Tiz Glamorous piques interest, too.