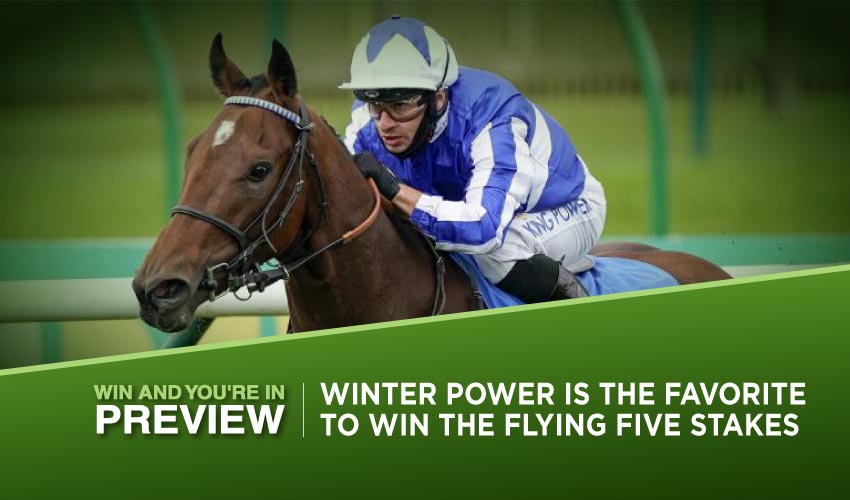 The weekend of some excellent action throughout Europe continues on Sunday as the card at Curragh, Ireland, offers four G1 races. At first, Winter Power will bid for her second G1 success in a row in the Flying Five Stakes; then there are two high-quality races for two-year-olds, followed by the Irish St Leger open for three-year-old and older horses where Search For A Song will attempt her third victory in the race.

The first G1 of Sunday’s card promises an exquisite clash of sprinters over the distance of 5 furlongs. The turf race open to three-year-old and older horses offers the purse of €300,000, from which Winter Power (9-4) could get the most significant part for her team, including trained Tim Easterby. The three-year-old filly was a pretty decent youngster last year, climbing from smaller races up to victories in a Listed and G3 company where she was pointed to launch the season 2021. Although she showed much ability in her other two Listed exploits, she didn’t fare in the King Stand’s Stakes at Royal Ascot, and thus she was only the fourth chance for the Nunthorpe Stakes.

And Winter Power, being developing sweetly into a great sprinter, once more cherished the 5 furlong-long distance, powered to the front and bagged her first G1 victory before Emiraaty Ana, winning his first G1 in his next outing. The talented Bungleinthejungle bay seems the real deal and should run well again, keeping her recent rival Dragon Symbol (7-2) behind.

The Archie Watson bound colt is also a three-year-old, shaping into an excellent sprinter throughout the season. Unraced at two, Dragon Symbol went smoothly through smaller races, and even though he’s still yet to score a Grade prize, he’s never been worse than third among the elite. On the G1 scene, he came second to Campanelle in the Commonwealth Cup, second to Starman in the July Cup, and last time out, he was third to Winter Power in the Nunthorpe. The likeable colt is again expected to hit the board, and the same applies to five-year-old mare Glass Slippers (3-1).

The Kevin Ryan trained bay won the Flying Five Stakes last year before she was second in Prix de l’Abbaye in France and before she went on to romp to the victory in the Breeders’ Cup Turf Sprint. As she’s been trying hard for the last two seasons, Glass Slippers’s having quite a lighter season, running just once in July and finishing third. After such a long hiatus, it was a fine effort; still, she needs to show up in the same form as last year at Curragh to beat the couple of three-year-olds.

Although the rest of the field comprises several nice sprinters, we picked just two of them to mention as they look the most appealing in this renewal. Mooneista (9-1) is another three-year-old participant to shine as she’s always been promising, handling both 5 and 6 furlongs-long distances. Still, she achieved her most significant victory so far on the shorter trip, which seems to suit her a bit more, winning the G2 Sapphire Stakes at Curragh in July. By a length a quarter, she beat Gustavus Weston (12-1), a five-year-old gelding that’s been a part of the Irish grade scene for three years, and after his second place behind Mooneista, he went to confirm his class and form in the G3 Phoenix Sprint Stakes. However, Gustavus Weston seems to be the one preferring 6 furlongs to 5.

As we were utterly smitten by Winter Power’s performance in the Nunthorpe, we’re siding with her this time. Still, we’re looking forward to what Glass Slippers and Mooneista will come with.

The 7 furlong-long turf race is open to two-year-old fillies only, and 9 of them will compete here for the purse of €300,000. The Joseph O’Brien trained filly named Agartha (11-4) is the favourite in the G2 company, having won two of her last starts. She’s been a slowly developing junior who didn’t even manage to score in maidens as her first victorious attempt happened in a G3 race at Leopardstown. Agartha then stuck to the distance of 7 furlongs, appearing in the G2 Debutante Stakes at Curragh in August, where she broke away and smoothly went for the front. The pace-setting role quite suits her due to her spacious gallop, thanks to which Agartha remained the leader for the whole race, with none of the rivals getting closer to her until the final stage.

Despite Sunset Shiraz (9-1) making ground on the outside, Agartha won easily by 2 lengths, thus, earning a position of a favourite for the Moyglare Stud Stakes. After two attempts in maiden races, Sunset Shiraz was the outsider for the Debutante Stakes, but she managed to come a long way from the rear of the field to secure second place. The bay filly trained by Gavin Cromwell seems progressive and should run well again, probably beating the Debutante Stakes third Discoveries (17-2) once more.

When Cairde Go Deo (11-4) bagged an easy victory during her second outing, she looked like she had more up in her sleeves, while Concert Hall’s (14-1) pedigree suggests she could be a future star. However, she was disappointing in the already mentioned Debutante Stakes. She’s won a maiden before that, fighting hard to get there, so on the firmer ground, she should be in the mix again. Still, the biggest threat for the favourite is Homeless Songs (11-4), who managed to beat Agartha at her first and only outing, running her down by 2 lengths. Dermot Weld surely doesn’t want to over-race her, and because Moyglare Stud is her owner-breeder, this race could’ve been her aim since the beginning.

Many smart fillies are to be found here and we liked Agartha, but Concert Hall should make amends on the good ground, and Homeless Songs was just impressive at her debut. Homeless Songs it is then.

The second G1 race for two-year-olds attracted 7 youngsters who will clash at the distance of 7 furlongs, with €300,000 being up for grabs. On turf, Point Lonsdale (7-4) is the leading victory candidate due to his four starts and four wins throughout his career. Full brother to G1 winner Broome, Point Lonsdale kicked off it with a bang, striking gold right at his debut, followed by exploits at the Listed, G3, and G2 scene. Last time out, the Aidan O’Brien handsome bay with a white face broke away as the favourite to the Futurity Stakes over 7 furlongs.

He smoothly went for the front and just led the pack home, winning gate-to-wire and springing a professional performance. As soon as Ryan Moore asked him for more, the bay delivered effortlessly, drawing clear from his rivals. Point Lonsdale boasted such a class and confidence, he needs to be the favourite of the Vincent O’Brien National Stakes, and even though there could be some future stars in the field, they have to be genuinely special horses to beat the beast Point Lonsdale already is.

While the favourite seems mature enough to handle anything the race could surprise him with, Native Trail (4-1) is a big, hugely talented baby trained by Charlie Appleby. One of the British raiders has two starts under his belt, and he displayed a long finish in both instances, reaching a victory in a maiden and then at the G2 scene in the Superlative Stakes.

The Oasis Dream bay faces a steep learning curve though. After bagging an easy win at his debut, Native Trail was pointed among the far stronger competition; however, he made an eye-catching move when getting closer to the leader from the midfield. It almost seemed the leading rival was too far from him, but Native Trail dug deep, and not only did he run down the leader, he managed to hold off another late-finisher by a short head. This hardy colt would be tough to beat, but the question is whether he can be as quick and responsive as Point Lonsdale at this point.

Hugo Palmer bound Ebro River (13-1) is also in the mix, having won the G1 Phoenix Stakes last time out, where he looked well beaten in the final stage, yet his toughness surfaced, and the chestnut colt got the better of his rivals. On the one hand, Ebro River is speedy, gutsy, and he’s the only G1 winner in the field, but on the other one, he doesn’t seem as classy as the duo mentioned above. Moreover, 7 furlongs could be more than he’d bargain for.

The last one of the pack who could potentially romp for the victory is Duke De Sessa (9-1). The dark brown colt trained by Dermot Weld broke his maiden at the second time out when he was utterly impressive at Curragh, relishing the soft ground back then. He won’t probably be granted there on Sunday, plus he shined at a mile, so 7 furlongs might be too short for him. But he seems smart.

We won’t go against Point Lonsdale as he’s the most likely winner here. Still, we’re excited about his clash with Native Trail.

At first sight, the mile and 6 furlong-long G1 race open to three-year-old and older horses seem to be the matter of Joseph O’Brien. On turf with the purse of €228 000, three of his stable stars will clash here, and it’s not an easy task to gauge which one will be the best. Twilight Payment (3-1) is the highest-rated contestant, a great servant to his connections for long years that he crowned with a front-running victory in the Melbourne Cup over two miles. The eight-year-old warrior placed twice this year, and even though he failed to shine in the Gold Cup at Ascot, he returned to the winning ways last time out, holding off Princes Zoe in the G3 race at Curragh –the trial for the Irish St Leger. Twilight Payment adores Curraghs, he digs deep, and despite his age, he is the leading victory candidate alongside his stablemate Baron Samedi (5-1).

The four-year-old bay has always been talented, but only after being gelded, he started to shine and triumphed 7 times in a row in the span of last and this season. Regardless of the state of the ground or the length of the trip (more or less), he managed to win until he was pointed among the elite to the Grand Prix de Saint-Cloud, where he finished fifth. Without discussion, Baron Samedi is a great horse; still, we don’t know what to make of his efforts in the final stretch where he hangs to the side, waits for his rivals, and twists in various ways under his riders. He’s hugely likeably in this race, though, which sentences Master of Reality (10-1) to the third place of Joseph O’Brien’s chances.

Like Twilight Payment, he’s brought lots of joy to his owner Lloyd Williams, being a consistent performer throughout the years. The six-year-old gelding bagged another victory last time out when outrunning everyone in the Listed company at Down Royal, and he should be among the first five to cross the wire in the Irish St Leger.

Besides Joseph O’Brien’s lot, the race attracted horses trained his father Aidan and brother Donnacha. Still, other participants are more respected, for example, Sonnyboyliston (9-2), the winner of the prestigious Ebor Handicap August. However, he will face stronger competition in the Irish St Leger, including the five-year-old mare trained by Dermot Weld- Search For A Song (9-2). The chestnut mare won the last two editions of the races, beating Twilight Payment back then, so upon her return to Curragh and such a long distance, she can be the one leaving all O’Brien’s horses behind.

Although Search For A Song hasn’t shown much this year, she’s always been sort of an autumn horse. She should run well again, but it won’t be easy for her to strike the gold for the third time in a row, given the Joseph O’Brien’s trio has boasted great form recently. We like her a lot, though.