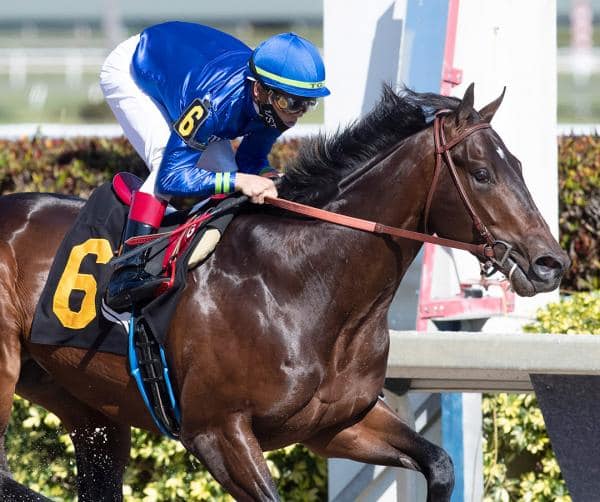 The Grade 3, $300,000 Fountain of Youth Stakes is tagged as Race 14 at Gulfstream Park on Saturday. It is the second Kentucky Derby qualifying race at the track, awarding points on a 50-20-10-5 scale.

The event covers 1 1/16 miles and will include a field of ten 3-year-old runners.

The favorite coming into the Fountain of Youth at 8-5 is Greatest Honour, a Tapit colt trained by Shug McGaughey. He took an impressive victory in the Holy Bull (G3), outrunning the field around the final turn. With that victory, he secured a spot as a top Kentucky Derby contender.

In the Kentucky Derby Future Wager pool 3, Greatest Honour closed as the third individual choice at 9-1.

While the Holy Bull field was not full of highly talented runners, it was still a big victory nonetheless. However; the colt will need to demonstrate more speed if he is to continue winning; as his career-high Beyer Speed Figure is only at 89.

Courtlandt Farms’ Greatest Honour has a total of two wins; one second-place and two third-places from a total of five lifetime starts. He is looking to make it a perfect two-for-two so far in 2021, and his total earnings sit at $175,240.

Contenders at the Fountain of Youth

One of the main rivals of Greatest Honour going into the Fountain of Youth is Prime Factor; third-place finisher as the even-money favorite in the Holy Bull. Trained by Hall of Famer Todd Pletcher; he took a nine-length victory in his debut, going six furlongs at Gulfstream Park.

Owned by WinStar Farm and China Horse Club; he stalked in the Holy Bull but was never able to threaten as the field turned for home. He will now be looking to move up on the Derby trail with a win this time around.

Prime Factor has a total of one win and one third place from two career starts; and his earnings are at $43,200. He is coming into the Fountain of Youth at 5-1 odds.

Drain the Clock is coming in as the second-choice at 9-2. Trained by Saffie Joseph, Jr; he is staying at Gulfstream instead of shipping to Aqueduct for the Gotham (G3) at one mile.

The runner has some uncertainty surrounding him; as the Fountain of Youth will be just his first start at over seven furlongs. In his third career race, he lost his rider at Delta Downs; and in the Swale; he won by over six lengths and registered an 85 Speed Figure.

Drain the Clock is still looking for a secure position on the Derby trail; but his career record of four wins from five starts and earnings of $152,550 cannot be overlooked.

One of the runners who could still win despite 8-1 odds is Tarantino, who is trained by Rodolphe Brisset. The son of Pioneer of the Nile finished second in the Holy Bull; which was his first career start on dirt. Prior to that, he took two victories and second in a stakes race on grass.

Despite finishing far behind Greatest Honour in the Holy Bull; he still managed to finish four lengths ahead of the rest of the field.

Make sure to check Horse Racing Tote for the latest horse news and updated odds on the Road to the Kentucky Derby.