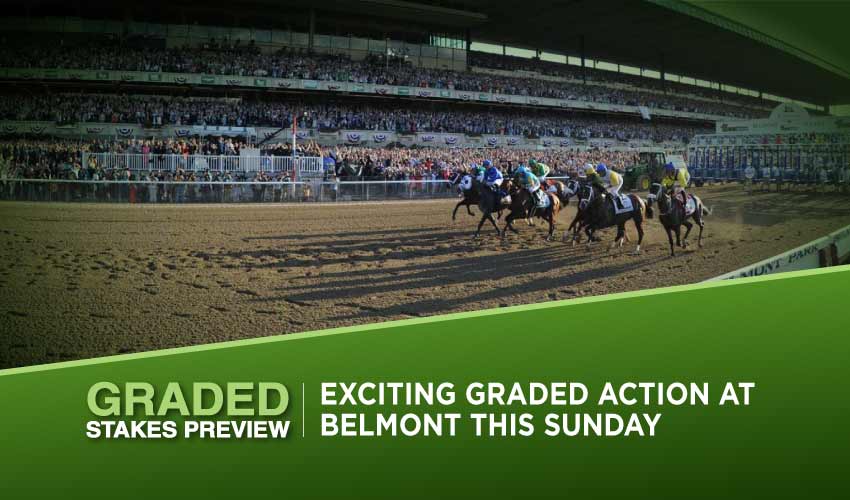 Belmont Park on Sunday is the stage for two exciting two-year-olds to stake their claims for inclusion at the Breeders’ Cup, with the filly Echo Zulu bidding to double her Grade 1 tally in the Frizette Stakes, and the talking horse Annapolis stepping up for the Grade 2 Pilgrim. In between, a field of high-class fillies contests the Waya, with My Sister Nat attempting to win the race for the second year running.

Two-year-old form is very often not worth the paper it’s written on, given the way these inexperienced, undeveloped horses improve or decline at very different rates as summer turns into autumn, and surprise results are frequent. If Grace Adler couldn’t even hit the board in a Grade 2 at Santa Anita on Friday, after winning a Grade 1 by more than 11 lengths on her previous start, then this is an area where we should all take great care.

With that in mind, the Frizette – a win-and-in for the Breeders’ Cup Juvenile Fillies – at Belmont Park on Sunday does seem to revolve around just one horse, another filly with solid Grade 1 form in the bank, and it’s hard to make a case for anything stepping up far enough to beat Echo Zulu

A daughter of star freshman sire Gun Runner, Echo Zulu is two-for-two and turned in a dazzling display in the Grade 1 Spinaway at Saratoga last month, when she led at every call and drew off in the lane to win by four lengths in a fast time, with a field of previous winners strung out behind her like washing on a line. Saucy Lady T was almost eight lengths back in third, unable to close on the front two through the stretch.

On that showing Echo Zulu should have no problem with the extra furlong today, and at the moment – an important distinction – she is on a different plane to the opposition.

Todd Pletcher has two plays against the favourite, with Jester Calls Nojoy the most intriguing after her ten-length demolition of a Saratoga maiden over seven furlongs, on the same card as the Spinaway and in a slightly slower time than Echo Zulu.

Jester Calls Nojoy went gate-to-wire there and looked a star of the future, and with that form almost impossible to quantify it would be no surprise if she can hustle up Echo Zulu. Pletcher’s second-string is the maiden A Mo Reay, third on debut when beaten less than a length by the more experienced Gerrymander in a six-furlong Saratoga maiden. She finished best of all there, learning as she went, and can flip the form with Gerrymander here.

Magic Circle was another seven-furlong maiden winner on the Spinaway card, kicking clear to get the job done nicely on her debut by four and a half lengths, although in a slower time than either Echo Zulu or Jester Calls Nojoy. She seems a bigger price than that victory merits and is one to watch.

Hot Fudge stepped up from her debut to come home strongly and win a maiden over six and a half furlongs here last month and could move up again, while Jumeirah already has experience of the mile after finishing runner-up in a black-type at Monmouth Park last month, staying on well to turn back the fast-finishing third horse. Laurel Park maiden winner Frosty Brew needs to step up a long way to figure, but as we’ve seen, nothing can be ruled out when two-year-olds are under discussion.

Frizette Stakes Betting Prediction Her authoritative victory at Grade 1 level makes ECHO ZULU the obvious choice in the Frizette, although there are some highly promising maiden winners in opposition.

Last year the Waya was run at Saratoga over a mile and a half and My Sister Nat got there by a neck. Since then she has been placed in several Grade 1s and Grade 2s, and ran arguably the best race of her life last time over today’s distance in the Grade 1 Flower Bowl back at the Spa, where she did all her best work late to be third behind the brilliant War Like Goddess – allowance winner Lovely Lucky almost seven lengths back in fourth.

She’s a solid performer at this level, consistently on the board and with previous defeats of today’s rivals scattered all over her record, and in Chad Brown has a trainer who is always the first port of call in a turf race. Brown’s second-string Orglandes has finished well adrift of My Sister Nat in the Grade 2 Glens Falls at Saratoga and the Grade 2 Sheepshead Bay over course and distance this year, and obviously has work to do in that regard.

Trainer Christophe Clement is also doubly represented, with Beautiful Lover possibly the best of the pair. She has never won a Graded stakes but was fourth in the Grade 1 Gamely at Santa Anita last year, and returns from a three-month break after winning an allowance here over a mile-sixteenth in June. Barnmate Call Me Love was a Group 2 winner in her native Italy, although Italian form is never the strongest, and was last of seven in the Glens Falls in which My Sister Nat was runner-up. However, her victory in a Listed race over a mile and a half here in July entitles her to respect in this company.

A better choice for exotics players is Always Shopping, a Grade 3 winner at Gulfstream Park over a mile and a half in January and a good third in the Sheepshead Bay, when she finished a nose ahead of My Sister Nat. Two dull efforts since then temper confidence a little, but they were over shorter distances and stretching out here could help her bounce back.

Sister Otoole won an allowance here over ten furlongs two starts ago, but steps into Graded company for the first time and will find it tough.

Betting Prediction Her consistency and quality at this level make MY SISTER NAT, who comes here off probably her best ever performance, the choice in the Waya ahead of Always Shopping.

Another choice between stellar maiden form and solid Graded form, but this time all the talk is about exciting maiden winner Annapolis, who blew them all away on his debut at Saratoga and is very highly regarded.

The War Front colt didn’t have much to beat at the Spa and was heavily favoured to begin with a win, but the manner of his victory was special. He came through from the back of the pack to lead at the top of the stretch, and cleared away in the lane to win by four and a half lengths. That race was over today’s distance, so stamina is not an issue, and there’s no doubt that Annapolis has bags of talent, but there are also no guarantees in two-year-old races.

His stablemate Midnight Worker also won a Saratoga maiden, over six furlongs back in July, and then filled third spot in a black-type at Monmouth over a mile, an effort that leaves him with something to find in regard to both potential and proven form.

The form in the book comes from Portfolio Company and Limited Liability, who both broke their maidens on debut at Saratoga and then went back to the Spa for the Grade 3 With Anticipation. Both were found wanting, unable to cope with the fractions set by all-the-way winner Coinage, although Portfolio Company fared best when runner-up, beaten two lengths, but three and a half lengths ahead of third-placed Limited Liability.

That was also run over today’s distance, so stamina is again no issue, but Coinage has been well beaten since – although he couldn’t lead – and it may be that the With Anticipation simply wasn’t that hot a race, although trainer Chad Brown issued a bulletin to the BloodHorse regarding Portfolio Company that may be pertinent. “We’re doing our best to get him to settle and changed some equipment on him,” he said. “The horse seems to be doing pretty well.” It may move Portfolio Company up, although it needs to.

Doctor Jeff broke his maiden here on debut over six furlongs and then found a tough spot in the Grade 2 Saratoga Special behind High Oak and Gunite. This may not be any easier, although the extra distance today could suit after he seemed short of pace at the business end at the Spa. City At Night was runner-up over a mile at Kentucky Downs on his debut and this is a whole different ballgame.

Betting Prediction Such is the chatter around the exciting ANNAPOLIS that it is hard to ignore his claims in the Pilgrim, which in any case is not the most competitive race for its grade.

Follow us on Social Media for instant Frizette Stakes updates!