Frosted Over dominant victory in the 2022 Dominion Day 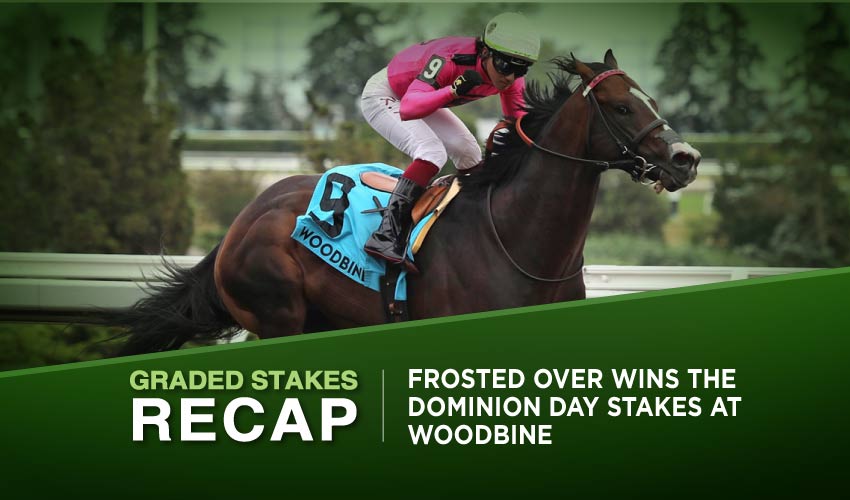 On Friday, the Canadian track at Woodbine hosted the G3 Dominion Day Stakes, where four-year-olds clashed with older horses, while it was Frosted Over who impressed with his dominant victory, bettering second Artie’s Storm by almost five lengths.

The G3 race was held on the all-weather track and open to four-year-old and older horses. Seven participants covered the distance of a mile and a furlong while competing for the purse of $150,000. From the beginning, the last year’s winner Mighty Heart (69-20) was prominent, set the pace, and remained at the front until the final turn, where Frosted Over (31-10) took command.

Under Kazushi Kimura, the four-year-old colt bolted up beautifully, drew clear from his rivals and cruised home in 1m 49.46s, utterly unchallenged. Artie’s Storm (47-20) sneaked forward at the fence to secure second place, four and ¾ lengths behind the winner. After setting the pace, Mighty Heart ran in third.

The victorious trainee of Mark Casse had just the best gallop he could have. After a good start, the son of Frosted settled in second place behind Mighty Heart, followed him throughout the race, and as soon as the jockey asked him to go forward, Frosted Over didn’t hesitate and willingly seized the front.

Since then, the Dominion Day Stakes transformed into a one-horse show as nobody was closing on the grey colt who easily recorded his second G3 win. In 2021, he succeeded in the Ohio Derby, while in 2022, he affirmed to belong among the best Canadian horses by taking second place in the G2 Stella Artois Eclipse Stakes behind Artie’s Storm.

Back then, he carried more than the winner; however, on Friday, Frosted Over was considerably advantaged over the mentioned rival. The four-year-old Artie’s Storm completed a hattrick by scoring the Eclipse Stakes and didn’t run a bad race in the Dominion Day Stakes, too, but the weight and the fact he was way too far away from the Frosted Over in the final turn just stopped him from getting into contention with the winner.

Still, he managed to deny Mighty Heart second place by half a length as the five-year-old did his job well, yet his form isn’t the same as it was in 2021.

Special Forces (242-10) was no threat to the trio above when taking fourth place in front of War Bomber (168-10). The last thing worth of mention is the utter last place of Talbeyah (29-10) who a bit irrationally started off as the second chance, probably because he carried the smallest weight in the field, but he couldn’t use it to his advantage at all.

Follow us on Social Media for Frosted Over updates!