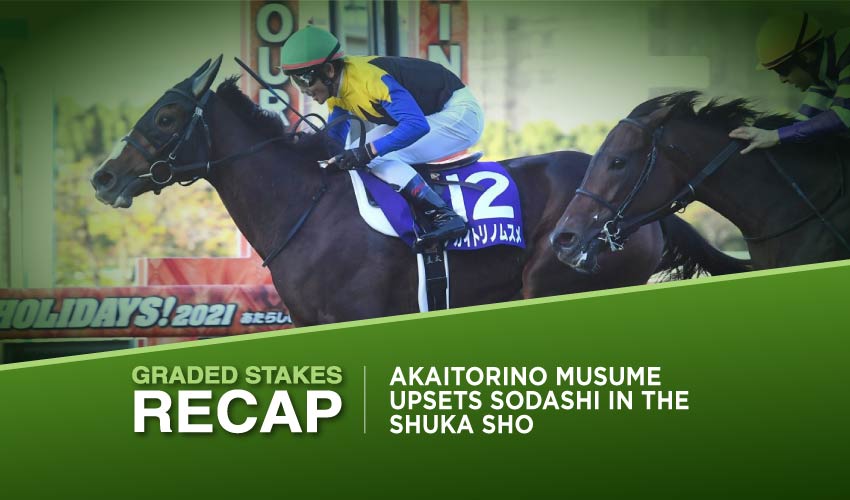 The past weekend offered at least two exciting races held in Japan and Horse Racing Tote brings you the Fuchu Himba S and Shuka Sho recap, while both of them resulted in disappointing efforts of the preferred fillies and mares. Still, both Shadow Diva in the Fuchu Himba Stakes and Akaitorino Musume delivered outstanding performances to score the Grade races at Hanshin and Tokyo, respectively.

The G2 turf race over a mile and a furlong for three-year-old and older fillies and mares didn’t see a victory of the preferred contestants as Shadow Diva (78-10) was respected yet didn’t look like a winner of this 106,660,000 Yen-race prior to the event at all. The five-year-old mare has placed in some prestigious races but has been waiting for a victory since 2018. Makoto Saito’s charge settled at the rear of the field initially; however, Yuichi Fukunaga proved to possess nerves of steel and remained far away from the front until the final stretch. He then switched with the white-face bay to the outside, and even though Shadow Diva simply seemed to be in an impossible position to impact the race, he gave everything he had to urge the mare forward.

Once Shadow Diva rallied forward, the race became a gem to watch. She passed by one rival after another, and together with Maltese Diosa (143-10), another late-finisher, she closed on leading Andraste (112-10) in the final possible moment and got her neck in front of the rival in time. Shadow Diva’s finish was simply compelling, resulting in her scoring her first G1 victory in 1m 45.60s. Five-year-old Andraste was stalking the pace-setter from the start and took command in the final stretch, looking a clear winner until Shadow Diva flew home from the outside. Andraste took second with Maltese Diosa running in third.

Preferred duo Magic Castle (27-10) – Des Ailes (17-5) had basically nothing to offer throughout the race and finished down the field.

The third leg of Japanese Triplecrown for three-year-old fillies didn’t bring redemption for white Sodashi (9-10), who faltered in the final stage like in the Japanese Oaks, finishing down the field once again. Still, the winner wasn’t shocking as Akaitorino Musume (79-10) showed her class when taking fourth in the 1000 Guineas and second in the Japanese Oaks. In this G1 race held at a mile and a quarter, she was respected in the turf event with the purse of 194,800,000 Yen, and under Keita Tasaki, she got a lovely trip. Galloping in the fifth spot, the bay filly wasn’t far away from the leader, so once the jockey urged her to close on her, Akaitorino Musume easily delivered. In the final stretch, she quickly got third place, and despite the fact Andvaranaut (63-10) was finishing strongly on the inside, it wasn’t enough to rob Akaitorino Musume of her well-deserved Classic win.

The daughter of Deep Impact trained by Sakae Kunieda crossed the line 2m 1.20s, half of a length before late-finisher Fine Rouge (23-5), who flew forward from the rear of the field. Third, Andvaranaut had to navigate through her rivals at the barrier in order to get into contention, leaving at least pace-setting A Shin Hiten (40-1) in fourth behind.

Whereas the first four finishers definitely delivered great runs, it’s a question what bothers Sodashi, who shined in the first part of the season. The white filly seemed a real star in the making, and the flop in the Japanese Oaks could’ve been explained by the trip she didn’t relish, yet last time out, she proved she could handle a mile and quarter. This time, she simply didn’t fare again, so maybe she’ll return to even shorter distances.

Join us at JazzSports and make sure to stay tuned for the latest Shuka Sho recap, Horse Racing results and racing entries.