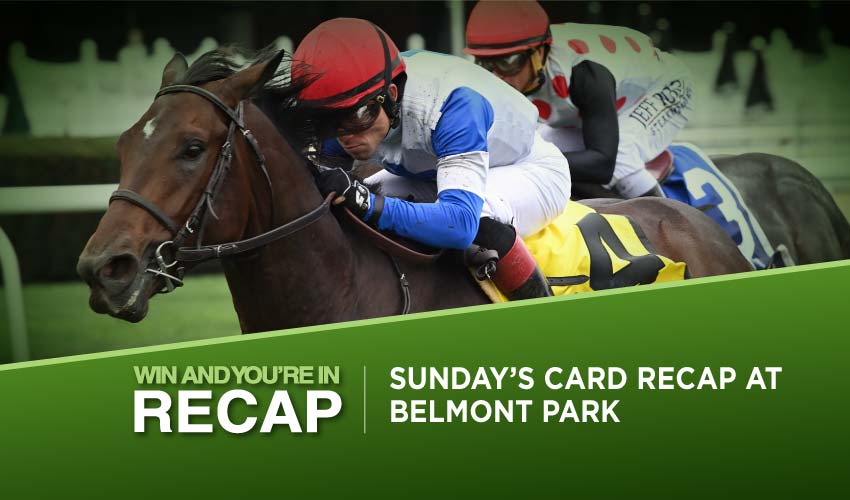 A final two-year-old hint for the Breeders Cup race was provided by the late-closing Slipstream in the Futurity Stakes. The in-form Chad Brown was the king of Queens on Sunday afternoon, continuing his winning streak at Belmont Park as Royal Flag led the way with an easy victory in the Grade 2 Beldame. She was just one of four winners on the card for Brown, who picked up further Graded honors in the most thrilling way possible as Sacred Life came with a mighty stretch run to snatch the Knickerbocker in the last stride.

Fresh from his success in the Grade 1 Joe Hirsch at Belmont the previous day, Chad Brown tightened his grip on the New York circuit when winning Sunday’s feature, the Grade 2 Beldame, with the remarkably consistent Royal Flag.

Before the gates opened for the Beldame, Royal Flag had never once been off the board in her 11 races, winning five, running second and third three times each. The only thing missing from her resume was victory above Grade 3 level, and she put that right with a thoroughly dominant dismissal of a strong field of distaffers. As with her stablemate Rockemperor 24 hours earlier, she finally got what she deserved.

“She’s definitely improved throughout the year,” Brown told the Daily Racing Form. “I’m so appreciative of Mr [Will] Farish for keeping her in training. I was on the fence about it. He wanted to race her at five and she seems to have improved even more.”

That much was evident in the way Royal Flag swept four and a quarter lengths clear at the line, underlining the ability she had shown when third behind Letruska in the Grade 1 Personal Ensign at Saratoga on her previous start. There, she came fast and late and didn’t get past. Here, she put her stamp on the race a little earlier.

Joel Rosario kept the 3-5 favourite chilly and wide off the pace set first by Miss Marissa and then by market rival Horologist, and brought her four wide on the home turn, right down the middle of the lane. Royal Flag was travelling like a winner even before she hit the front at the eighth pole, and she drew off without being extended to beat Horologist, winner of the Beldame 12 months earlier, in a tick over 1:50 for the nine furlongs. The longshot Miss Marissa was a half-length back in third.

“I wanted to be out there,” said Rosario when asked about his wide trip. “When she passes horses, she can hang a little bit. I feel like if I get her away from them, she’s more focused at that point. So I stayed out there. If she has another horse there [beside her], she’ll just stay there.”

The homebred five-year-old daughter of Candy Ride was confirming the form she had shown in the Grade 3 Shuvee two starts ago, when she beat Horologist by a narrower margin than on Sunday when again leaving her challenge late. Here she displayed a little tactical versatility, a trait that can only be an asset moving forward.

Royal Flag was not under consideration for last year’s Breeders’ Cup Distaff, but this year all roads will lead to Del Mar on November 6, where she will renew rivalry with Letruska, who rubber-stamped her position as divisional leader when winning the Grade 1 Spinster at Keeneland on Sunday. Beating that front-running phenomenon will never be easy, but Royal Flag is coming into peak form at the right time and has never run a bad race in her life.

“I do have a lot of respect for Letruska, she’s the clear leader of the division, she’ll be tough to beat,” added Brown, who like Rosario was winning his second Beldame. “But coming within a half-length of her at Saratoga, and with our mare continuing to get a little faster and a little stronger, hopefully she can make up that half-length.”

Brown added to his Graded-race haul two races later, and kept himself top of the trainers’ standings at the Belmont Park fall meet, when sending out Sacred Life for a last-gasp victory in the Knickerbocker. It was Brown’s third of four wins during the afternoon.

A neutral observer would have called the Grade 3 a hard-luck story for Field Pass, who was quick from the gates and soon setting steady fractions on the lead, trying to twelve them into submission. One from last, Jose Ortiz kept Sacred Life under restraint, watching the race unfold ahead of him.

Field Pass still had the call as they circled the turn and looked the winner for all money as he surged down the lane, putting away the challenge of Temple, rolling seven lengths clear of Sacred Life, who was just beginning to move. Even inside the last sixteenth it was all Field Pass, but Ortiz had lit the fuse by then and Sacred Life finished like an absolute rocket, sticking his nose out for the camera and getting up in the last stride to win by a head. The six-year-old stopped the clock in 1:46 and three-fifths and paid off at $12.80. Temple held on to third, a length and three-quarters back.

“He always tries, but today I think it was one of his best performances,” said Ortiz. “It was a great turn of foot, and he made up a lot of ground from the eighth pole to the wire.”

The Knickerbocker was a change of luck for Sacred Life, who had been zero-for-four for 2021 and without a win for 14 months. The French-bred son of Siyouni, who is also sire of this year’s European superstar St Mark’s Basilica, was a four-time winner in his native land before emigrating Stateside, where he has been tried at the top level several times without making a breakthrough. This was his first Graded success, although he won a Group 3 at Saint-Cloud on his third career outing.

“He’s trained well. He’s an honest horse,” said Brown’s assistant Dan Stupp. “It just hasn’t worked out for him in some of his races, but he clicked with Jose today and got a great trip. The finish looked a little more fun for Jose than it was for me!”

It wasn’t any fun at all for Dylan Davis, the rider of Field Pass. “We got caught in the last two jumps,” he said. “He ran great and very hard, but it’s just unfortunate when you lose like that.”

The Futurity was a ‘win-and-in’ for the Breeders’ Cup Juvenile Turf Sprint, but the winner Slipstream has a different target in store, although he’ll still be there at Del Mar on November 5 for Future Stars Friday.

Trainer Christophe Clement is eyeing instead the Juvenile Turf over a mile, reckoning that his son of More Than Ready wants to go up rather than down in distance, and on the evidence of the Futurity it’s hard to disagree with that assessment.

Slipstream ($6.60) lived up to his name, getting a tow into the race from all his seven rivals as he sat last under Joel Rosario. Up ahead, the longshot Run Curtis Run was also justifying his name, setting smart fractions while Rosario played patience.

Run Curtis Run was still in front at the stretch call, still in front at the sixteenth pole, but now Rosario had found room on the fence and then, switching outside, ran down the long-time leader to take the spoils by a length, stopping the clock in 1:08 and four-fifths, with Run Curtis Run a half-length ahead of Biz Biz Buzz in third. The favourite Chi Town Lady broke badly and could never find her way back into the race.

“I had to take up a little bit and find a different style with how the race was playing out,” said Rosario, referring to the moment his colt was squeezed out inside the first half-furlong. “The plan was to be a little closer, but it all happened right away, so I had to take another way to do it.”

It was a very different way to the manner in which Slipstream broke his maiden over seven furlongs at Belmont last time out, when he wired the field for a wide-margin success. A horse who can go from the front or come from behind will never be at a tactical disadvantage, and given his colt’s proven stamina for seven furlongs it looks as though Clement has made the right call in steering away from the flying five furlongs of the Juvenile Turf Sprint.

“I prefer six furlongs going into a race that’s a mile at Del Mar on firm, rather than going a mile and a sixteenth and dropping back,” he said. “I always like the idea of pushing that sprinter speed going six or seven furlongs to a mile when you go to California.”

Join us at JazzSports and make sure to stay tuned for the latest Futurity Stakes news, fixed horse racing odds. and racing entries.

Follow us on Social Media for instant Futurity Stakes updates!