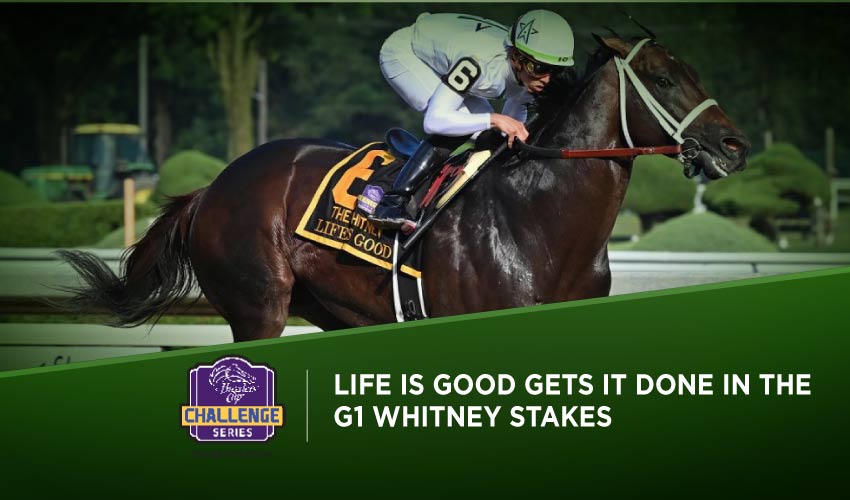 A true champion was on show at Saratoga on Saturday, when the magnificent Life Is Good won the G1 Whitney Stakes with another all-the-way tour de force, setting himself up for a tilt at the Breeders’ Cup Classic.

The end-of-year festivities also beckon for the other Graded-stakes winners of the day, with Nations Pride G1 Saratoga Derby, Chi Town Lady (G1 Test), and War Like Goddess (G2 Glens Falls) all under strong consideration for Keeneland in November.

It was his toughest test so far and in mid-stretch it really looked like it, but then the outstanding Life Is Good eased away to win the Whitney, the marquee event at Saratoga on Saturday, confirming himself one of the best two horses in America and punching his ticket for what could be a remarkable Breeders’ Cup Classic at Keeneland in November.

Life Is Good broke on top and led all the way, as is usual, and although the 4-5 favorite was challenged on both sides by Hot Rod Charlie and his barn mate Happy Saver as he began his stretch run, he put away both rivals with some comfort and drew off under Irad Ortiz to win by two lengths in a tick under 1:49.

Happy Saver, the runner-up for the fifth time in a row, had a head in hand over Hot Rod Charlie.
The big disappointment of the race was the second-choice Olympiad, coming along on a five-race winning streak, who showed no zip at all and faded away to finish fourth.

“Today we got rain, a deep track, heat, and humidity. All those things can be concerning, but he was able to overcome all that and just show how brilliant he really is,” said trainer Todd Pletcher, winning his fourth Whitney.

“To me, this is the premier older-horse race in the country outside the Breeders’ Cup Classic, so it means a lot.”

Life Is Good, now eight-for-ten with three G1s and a bankroll of just over $4m, will get his chance at the ten-furlong BC Classic now, in which he could meet the freakish and unbeaten Flightline, his only rival for the unofficial title of ‘best horse in America’ and the official title of Horse of the Year. It has yet to be decided whether he will train up for the race or run again before November 5.

Different day, different result. The first six horses from the Belmont Derby reconvened for the Saratoga version, and this time the dollars went for export as 2-1 favorite Nations Pride pulled clear to give Europe back-to-back scores in the second leg of the Turf Triple.

At Belmont Park, Classic Causeway went gate-to-wire, and he tried the same tactics here but was run down at the eighth pole by Nations Pride, who kept rolling under William Buick to hit the line a length and three-quarters ahead of second-choice Annapolis, with Classic Causeway showing no quit and hanging on for the show spot, a head further back. The Irish raider Stone Age was a one-paced fifth; the stopwatch showed 1:54 and three-fifths.

“He was slow from the gate last time and it was a messy race,” said trainer Charlie Appleby, an increasingly familiar face in the winner’s circle after major turf route races Stateside. “We came here confident that he was the right horse for the race and that he’d get the job done. It was a good ride by William.”

Nations Pride, who has relished shorter distances after missing the board for the only time in his life in the Epsom Derby, is now five-for-eight and an obvious candidate for the final leg of the Turf Triple, the G3 Jockey Club Derby over a mile and a half at Aqueduct on September 17. That’s a win-and-in for the G1 Breeders’ Cup Turf, for which Appleby has a number of leading candidates including last year’s winner Yibir.

There was a major shock in the Test when, after the track had been sealed following a rain shower, 17-1 outsider Chi Town Lady landed her first win in nearly a year and her first in Graded company.

The Test was expected to be easy pickings for 1-5 favorite Matareya, but she seemed unsuited to the damp surface. On the contrary, Chi Town Lady thrived on it, coming from a long way back at halfway under Joel Rosario to catch the front-running Hot Peppers inside the last sixteenth and win going away by a length and a half, stopping the clock in 1:23 and four-fifths. Matareya could manage only third, a neck behind Hot Peppers.

“We were hoping for second or third at best, and here we are in the winner’s circle,” said delighted trainer Wesley Ward. “At the three-eighths pole she started to make her run and I thought ‘maybe we’ve got a shot’ . . . and then she came through for us.”

The G1 Breeders’ Cup Sprint over six furlongs – or the G1 BC Filly & Mare Sprint over seven – at her home track Keeneland on November 5 is now the target for the daughter of Verrazano.

Bill Mott, thoroughly disappointed by the eclipse of Olympiad in the Whitney, at least had something to take away when War Like Goddess justified 2-5 favoritism to win back-to-back iterations of the Glens Falls.

It was a straightforward afternoon for the mare, who moved smoothly through to pass the front-running Key Biscayne in mid-stretch before easing away under a motionless Joel Rosario, winning by a length and a quarter in a time of 2:29 and two-fifths. Temple City Terror claimed the place spot by a half-length from second-choice Virginia Joy.

This made it eight wins from ten starts for the admirable War Like Goddess, who will stay at the Spa for either the G1 Sword Dancer, against males on August 27, or the G2 Flower Bowl – a race she won last year – against her own sex a week later.