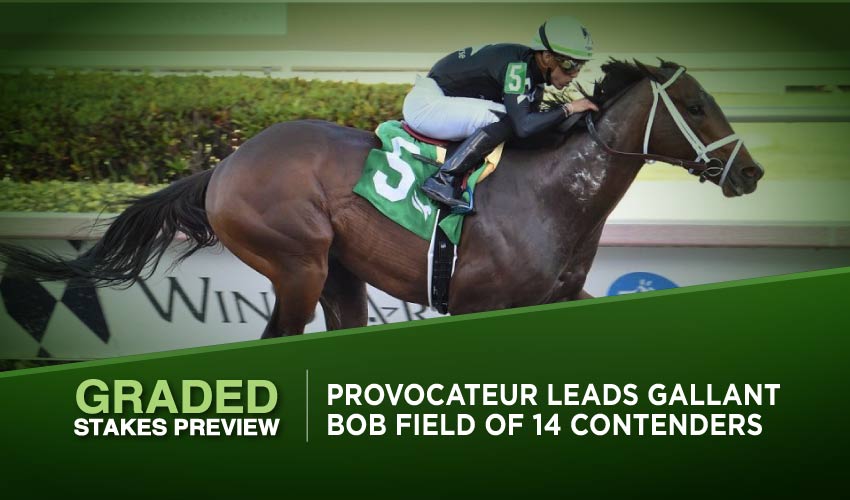 The undercard at Parx Racing on Saturday features two very tricky sprints for bettors to sink their teeth into, with G1-placed Provocateur and Runninsonofagun set for class relief in the G2 Gallant Bob and stakes-winner That’s Right the likely pace angle in the G3 Turf Monster. A dash of class is brought to the table by Fearless, the warmest favourite of the afternoon in the G3 Greenwood Cup

Fourteen runners over six furlongs spells trouble for bettors and the Gallant Bob – the pick of the undercard on a big Saturday at Parx Racing – reckons to be a minefield of scanty form, trouble in-running and the best horse on the day not necessarily being the best horse in the race.

The morning-line choice is Provocateur, a consistent and progressive colt who has hit the board on his last six starts. He is probably best judged not on his third place behind Jack Christopher and Pappacap in the seven-furlong G1 Woody Stephens at Belmont Park – he was beaten almost 12 lengths over a distance that stretches him a little – but on his victory over several of today’s rivals in a Monmouth Park stakes at this distance last month, when he finished with a flourish for a two-length score over the late-charging Witty, with Speaking a length and a half away in third, Of A Revolution a length and a quarter back in fourth and the favoured G3 winner Lightening Larry a nose away fifth.

It was a fast time, which is good, but Witty was run out of town – almost six lengths behind fifth-placed longshot Practical Coach – in the G3 Smarty Jones here next time, which is bad, although Speaking franked the form when winning a similar race four weeks ago, and Of A Revolution was runner-up in a seven-furlong stakes at Charles Town behind Alottahope, beaten two and three-quarter lengths with a long way back to the third. The formlines are tangled, typical of this type of race.

In May, Provocateur ran two-three with Runninsonofagun in a six-furlong stakes at Belmont, two and a half lengths between them with Dance Code a never-in-it fifth of six, and Runninsonofagun has improved since then, finishing a longshot third behind Jack Christopher and Gunite in the G1 H Allen Jerkens Memorial at Saratoga on his most recent start. Such longshot form isn’t always to be relied upon but this certainly represents class relief.

Wesley Ward is renowned for his deep wealth of speed horses and his Nakatomi has never been off the board in the US, only running down the field on a trip to Royal Ascot last year. He struck first time this year, off an eight-month layoff in an allowance optional claimer at Churchill Downs in June, so his three months on the bench since then are no cause for concern.

He rates a big threat alongside track favorite Scaramouche, who is five-for-six here and kicked his allowance rivals out of the way to the tune of three and a quarter lengths last time, with Little Vic a half-length further back in third. Scaramouche’s outside post is a problem, though.

His continuing improvement gives hope that RUNNINSONOFAGUN can flip that Belmont stakes form from May with Provocateur.

The heaviest favourite in any of the Graded stakes across the afternoon dominates the tote board in the Greenwood Cup, with Fearless head and shoulders above the opposition on more than one metric.

Consistency is the six-year-old’s ace card – he hasn’t missed the board in his last 11 starts – and he has been in sparkling form this year, with victory in the G2 Brooklyn at Belmont Park over a mile and a half in June, when he drew off to score by a dominant two and three-quarter lengths, underlining his talent.

Last time out he outstayed his rivals in a stakes at Saratoga over a mile and three-quarters, though he also had enough speed to win the mile-eighth G3 Ghostzapper at Gulfstream Park in April, and this powerful galloper is expected to maintain his rock-solid resume.

Track specialist Magic Michael won this race 12 months ago – Forewarned last of nine – and has been in reasonable form this year without actually getting his head in front. Stats of nine wins from 11 starts at this circuit put him on any short-list, but he’ll need a career-best today, and he has plenty of ground to make up on Ridin With Biden from a mile-eighth stakes at Laurel Park in July, when Ridin With Biden went all the way and had nine lengths to spare over Magic Michael in third. Home plate should help but nine lengths is a long way.

The Reds is zero-for-three at Graded level, but could be in the mix if he can bring his good form from Saratoga this summer. He pressed the pace before driving home to win an allowance optional claimer at the Spa last time out, but that was at a mile-eighth and stamina is a big question. Fellow Saratoga winner Bossmakinbossmoves was making his stakes breakthrough when successful over a mile-eighth, but he only had three to beat and will need to find much more, especially as he has never gone further than that mile-eighth.

It’s easy to forgive Western River his dreadful performance in the G3 Dueling Grounds Derby on turf at quirky Kentucky Downs, but he didn’t show much more when fifth in a mile-eighth stakes at Saratoga on his previous start and he doesn’t look up to this level.

Last year’s G2 Remsen winner Brooklyn Strong showed a flicker of his old ability when third in a Saratoga stakes over a mile, but he is riding an eight-race losing streak and there’s no reason why stretching right out should help him with that, while Double The Heart makes his stakes debut here and is only two-for-nine at this track, so there’s not much in his favour.

The consistent FEARLESS has a huge class edge over his rivals and his stamina is not in doubt, two factors that make him impossible to oppose.

The Turf Monster poses similar betting problems to the Gallant Bob – a big field, a short distance – and last year it was won by a (subsequently disqualified) 108-1 longshot, so caution is a wise watchword.

Perhaps the scope for further improvement owned by the three three-year-olds in the field is the best place to start, with the morning-line pitched along the same lines. It’s not the hottest G3 in the world and it feels like class relief for Surprise Boss, third in the G3 Quick Call at Saratoga after making the early pace, before being soundly beaten in a stakes over the same course and distance, running five-six with That’s Right with half a length between them.

That’s Right was second-choice and went hard from the gate there, only giving it up at the eighth-pole, and he was previously a dominant winner of a Monmouth Park stakes, going gate-to-wire to win by three and a quarter lengths with Grooms All Bizness – who makes his first trip across state lines today, having never before left Monmouth – a late-closing third, a head further back. Those forcing tactics could again prove a key factor.

The older brigade is led by Nothing Better, barnmate of Grooms All Bizness, who has hit the board in his last seven starts and was judged a little unlucky when runner-up in a Monmouth stakes three weeks ago, beaten a length and a quarter after being crowded out by the winner. That was at a mile, and he had previously won over five and a half furlongs in another Monmouth Stakes.

This is home for Uncle Ernie, who has never raced anywhere else and has never missed the board, although he’s been off since running third in a six-furlong stakes on the main track in March. The layoff, plus a move to the lawn for the first time, doesn’t encourage. Fellow Parx specialist Breezy Gust was third in a stakes here over six furlongs when coming very wide down the lane, but he comes back to the weeds for the first time in more than two years and has never won on this surface.

Another switcher is Smooth B, who got it done on the main track when winning a stakes over course and distance and the change in surface may not be a positive, while stakes debutant Boat’s A Rockin has been winning over a mile-plus this summer and may find everything happening too fast for him.

The hard-working Extreme Force – 13 starts in 2022 – was a longshot runner-up in a stakes over course and distance two starts ago, when War Tocsin was four lengths behind in fourth, but is another returning to turf after a long spell on the main track.

This is a poor G3 and THAT’S RIGHT should be able to make his front-running tactics pay dividends if getting a clean break from his rail post.