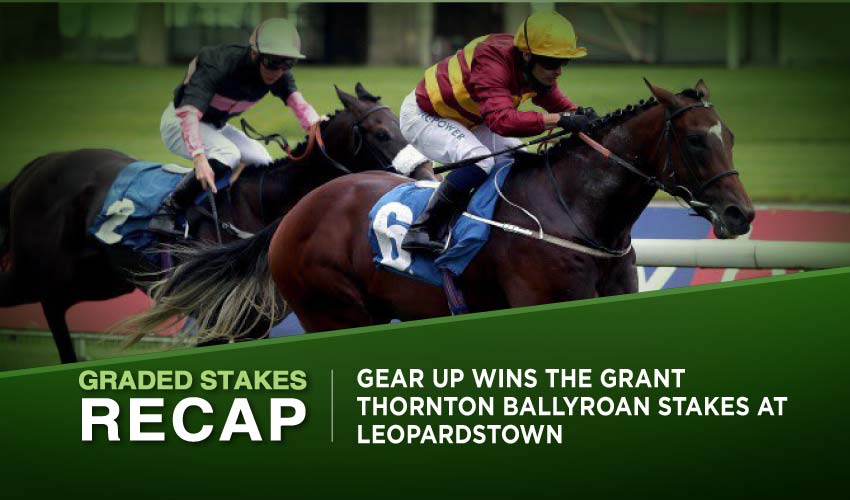 Despite some big racing over in Ireland this weekend, the immediate focus was over at Leopardstown for this year’s Ballyroan Stakes. Let’s recap the best of the action and Gear Up victory.

Grade 3, One mile and four furlongs. Open to horses aged three and over. Total prize pool €50,000

Eight horses headed to post for this year’s Ballyroan where the betting was headlined by the unbeaten Beamish, who was looking to land his fourth consecutive victory and first ever graded win.

Behind Beamish in the betting were the Joseph O’Brien trained duo of Cleveland and Gear Up. In what was a tightly grouped betting field, this really was a race that could have landed anywhere.

Raced over a mile and four furlongs, the eight runners had plenty of time to sort themselves out and get into a nice early rhythm.

Taking the early lead and setting a moderate pace was the Jessica Harrington trained Sandhurst. Stacking the field up, the running order of the horses would barely change. The race would spring into life as the runners rounded the home corner and hit the two furlong pole.

With Sandhurst unable to stretch the field he was quickly swallowed up by Gear Up.

Gear Up arguably bought the best form into the race following a second place finish in the higher graded Comer Group International Stakes. With that run behind him, jockey Dylan Mcgonagle had an abundance of trust in his partner as he kicked for home a furlong and a half out.

Surprised by the move, the jockeys on the two other market principles Cleveland and Beamish realized they had missed a trick and urged their horses to urgently close.

Snagging the running rail with a furlong remaining, Gear Up had the race in his lap, but a fast finishing Cleveland had other ideas.

As the two horses raced well inside the final furlong it looked like Cleveland had the upper hand. With just one hundred yards to go, the race could have gone either way.

Showing a great attitude and plenty of heart, Gear Up and Mcgonagle maintained their poise and speed and did just enough to hold off the surging Cleveland.

Despite defeat, if the race was 100 yards longer it was clear that Cleveland would have won. There is an argument to be potentially made that the classiest horse in the race didn’t win and it will be fascinating to see where he ends up next.

Beamish found the pace too hot to handle but still had enough class to finish third, he remains a horse to keep an eye on.

Follow us on Social Media for more 2022 Ballyroan Stakes updates!