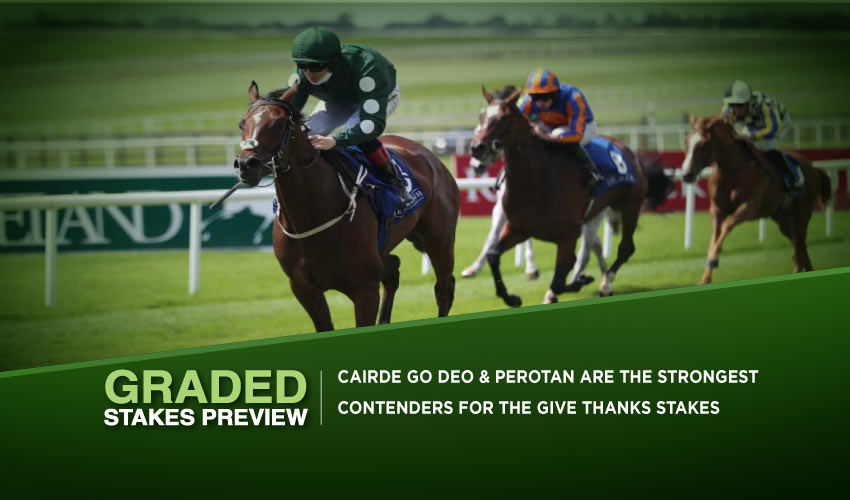 This Friday evening’s card at Cork is headlined by the Grade 3 Give Thanks Stakes. A relatively new race that was first raced in 2003, nine will head to post for this year’s renewal.

Here is everything you need to know.

Group 3, one mile and four furlongs, open to fillies and mares aged three and over. Total prize pool €65,000.

Leading the weights in this year’s Give Thanks Stakes is the John Harrington-trained Forbearance. A runner of four races this year, it’s been a poor season where she has failed to fire in any. A regular at this level, she is yet to win a graded contest but will be hoping that changes here.

Sharing top weight is the Paddy Twomey-trained Rumbles of Thunder. A winner of one of her four starts this year, she has placed in this grade before. Against some talented rivals, she will likely need a career best to come out on top.

Aidan O’Brien is looking to win this race for the third time in seven years and runs two here, Kiss You Later and Perotan. Perotan is likely to be his best chance.

Easily the least exposed horse in the race, Perotan has won both of her careers starts to date but does take a small step up in class here.  She won her last race in Listed company comfortably and could be the one to beat here.

Kiss You Later has had a busy season and this will be her seventh race of the season. A winner of one of her starts, she has often found the step up to Grade 3 company too hot to handle and will need to produce a big run to play a part in proceedings.

Another trainer that runs two in the race is Joseph O’Brien who will run Tranquil Lady and Grecian Slipper.

Tranquil Lady is likely to start as O’Brien’s most likely winner. A winner at this level previously, she takes a drop back in class following two runs at Grade One level. She has failed to make a dent in any of those two races but will be hoping that a return to these calmer waters could see her back in the winner’s circle.

Grecian Slipper will be running in graded company for the very first time. She is still relatively unexposed and this will be just her fourth career start. A winner of one of her three career starts, she struggled in Listed company last time out and will need to take a huge stride forward to make an impact here.

Likely favourite for the race is the G M Lyons-trained Cairde Go Deo. A horse going places, she has won twice at Listed level this season and placed third in the Group One Irish Oaks. That is a fantastic piece of form, and if she can produce anything close to that level, she will be incredibly hard to beat.

One of the likely outsiders in the field is Lady Of Inishfree. She has already had a run this week and could only finish tenth out of twelve runners.  A hard horse to gauge, she has previously run big races at the very highest level. She has never won a graded contest but could run a big race at a huge price.

Female Soldier is another who had a run this week but could finish just seventh out of twelve. She has just had four runs in her career and is likely to find this race difficult based on what she has shown so far.

Follow us on Social Media for more Give Thanks Stakes updates!