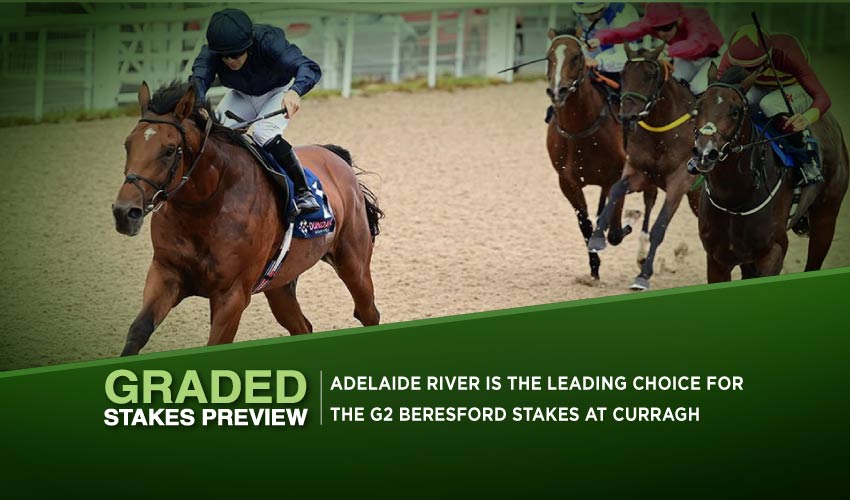 On Saturday, a treasured G2 race for two-year-olds takes place at the Curragh Racecourse, Ireland. The Beresford Stakes welcomes a pair of Aidan O’Brien’s colts, including a G3 placed Adelaide River, who is the favorite of this event. Two-year-olds will also head into the Goffs Million, Europe’s richest race over seven furlongs for juniors, attracting some promising horses

The G2 race is open to two-year-olds who will cover the distance of a mile. On the turf surface, juniors will vie for the purse of €130,000, with a duo trained by Aidan O’Brien having an outstanding chance to strike gold here. Adelaide River is the leading one of the couple, given he has a Graded experience and has hit the track twice already.

The Australia’s son recorded his debut in August at Dundalk, where he galloped in second in a mile-long race, and on the all-weather surface, he drew clear from his rivals in the final stretch to bag the race by almost three lengths. After such a fine performance, Aidan O’Brien sent his trainee to Longchamp to compete in a G3 event over a mile, where Adelaide River settled in second; however, he didn’t particularly thrive on the soft ground.

In the end, he succumbed to one of his rivals by a head; still, his effort wasn’t bad at all, and he should benefit from the experience on Saturday. He’s about to face his stable companion Continuous by Deep Impact. The white-faced bay has been out just once as he tried out the track in Curragh in a seven furlong-long race in August. Back then, he quickly seized the front and subsequently, he jumped away from his rivals to secure a triumph by one and ½ of a length. He actually left an excellent impression, and if he runs his stable mate down on Saturday, it won’t be a massive surprise as Continuous looks quite classy.

Regarding the rest of the field, some participants have also run among Graded horses like Adelaide River, including Pivotal Trigger, who finished third behind him in France. Prior to that effort, he managed to score a maiden at the third attempt for his trainer, Jessica Harrington.

Lakota Seven and Young Ireland met back in August when they headed into the G2 Futurity Stakes at the Curragh Race Course. The former aimed there after securing his maiden victory smoothly and finishing third in a Listed, while he finished fourth in that G2 event, losing by five and ½ of a length to victorious Aesop’s Fables. Young Ireland was the last but one.

The last to mention here is Crypto Force, trained by M O O’Callaghan, despite the fact he failed to show anything special at the Listed level in June. The reason why he’s interesting lies in his debut because Crypto Force defeated Auguste Rodin, a G2 winner by now, back then, and very easily so. If he remembers that form on Saturday, he could be a vital rival for the O’Brien duo.

Adelaide River because of his experience and the class he’s suggested. Moreover, Wayne Lordan is the jockey number one for Aidan O’Brien in this race, and he picked to ride Adelaide River over Continuous, which should mean something.

The abundant purse of €1,000,000 is offered in this event, open only to two-year-olds who were purchased at the Goffs Orby action. Its inaugural edition is the richest race for juniors, ran at the distance of seven furlongs, and therefore, it attracted a large field of nineteen horses facing off on the turf surface.

Hellsing is probably the most appealing contestant here as the Ger Lyon bound colt has three starts under his belt, and his class should be quite enough for this tilt. The son of Dandy Man showed some speed in his debut when he delivered over six furlongs in May, then rested for two months to return in the G3 Tyros Stakes. He was no match for the winner over the distance of seven furlongs; however, he seized second place back then; therefore, he was assigned the role of a favorite in his most recent outing, a Listed over seven and a half furlongs.

Hellsing looked already like a professional, settled near the front, and always was doing enough to prevail, which could also happen on Saturday. He doesn’t seem to be a real star in the making, yet he should be a decent horse. Joseph Patrick O’Brien trained filly Zoinnocent is experienced, too, as she’s run four times.

After bagging a maiden, she finished a solid second at the G3 stage; moreover, the distance is right up her alley, with Oviedo looking like he also should appreciate sticking to it, too. The Edward Bethell bound bay showed up twice at the British tracks, transformed his debut into a smooth victory, and running over the same distance in the G3 Acomb Stakes; he snatched up third place. Of course, he couldn’t hold a candle to the brilliant Chaldean, yet his performance still could be perceived as promising for the future.

In such a large and competitive field, it won’t be a surprise if an underestimated participant strikes gold, so we also mention one of the less preferred horses, Killybegs Warrior, trained by Charlie and Mark Johnston. The colt bagged his debut and only narrowly missed another success when running third in July, upon which he recorded a four-length victory in a Class 3 handicap. Back then, he handled seven furlongs with ease, and even though he faced only two rivals, his performance fuelled up hope he could deliver a good run on Saturday.

The last to talk about is Aidan O’Brien’s colt Hiawatha, a full brother to G1 winner Luxembourg. After taking two places in his first two outings, he finally scored a win in August when covering the distance of a mile and drawing clear from his opponents. He’s progressive and could be just hitting the peak of his form.

Hiawatha, whose pedigree is impressive, as well as was his maiden victory. He isn’t as experienced as his rivals, but the class could be on his side.