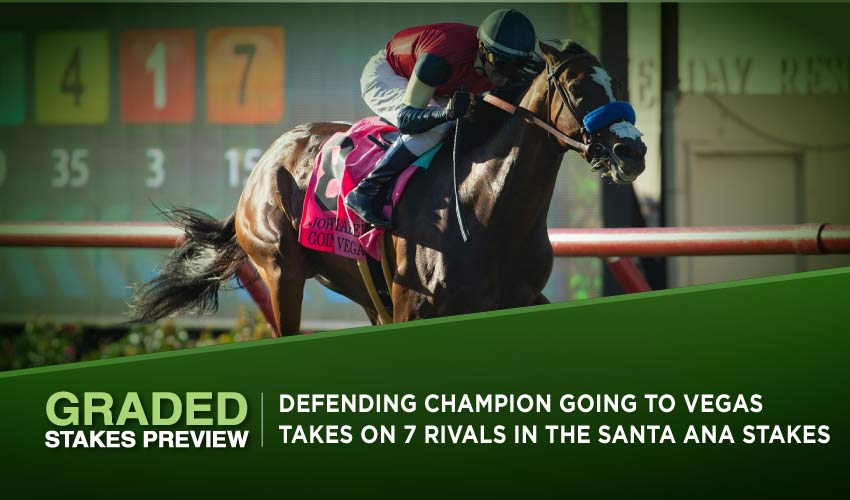 Saturday’s card at Santa Anita Park features especially the G3 Santa Ana Stakes, where some interesting four-year-old fillies and older mares will clash. Going to Vegas attempts becoming a back-to-back winner here, and together with G1 winner Queen Goddess, they could be the main rivals for still progressive chestnut Neige Blanche.

In this $125,000 race, nine four-year-old fillies and older mares line up to cover the distance of one and a quarter. On the turf surface, Going to Vegas scored the G3 event in 2021, which was her first Graded victory.

After that, the Richard Baltas mare went on to bag a G2 race and also the G1 Rodeo Drive Stakes. She didn’t draw on the performance during the Breeders’ Cup meeting; still, her premiere outing in the 2022 season was quite promising as she finished second only behind a less carrying rival.

On Saturday, Going to Vegas is again about to carry the biggest weight together with a couple of contestants; still, thanks to her obvious class, she is a victory candidate for the Santa Ana Stakes without a doubt.

Leonard Powell bound Neige Blanche is another participant disadvantaged against some of the rivals. Upon finishing fourth in the mentioned G1 race, the mare aimed among the G3 company and surprisingly won at the Del Mar Racecourse in November. In January, she was the favorite for the G3 Astra Stakes, where she successfully covered the distance of a mile and a half and achieved another G3 victory; still, it’s necessary to say the competition wasn’t of such a quality as Saturday’s one.

She’s a gutsy specimen capable of fighting hard despite carrying a big weight, so she needs to be considered here alongside Queen Goddess, the G1 victress of the American Oaks. Although Michael McCarthy’s trainee triumphed back then, she finished one but last in the 2022 debut – the G3 Bayakoa Stakes and overall, her record suggests Queen Goddess is a talented filly; still, she’s just not able to show it on a regular basis.

Four-year-old Closing Remarks seemed promising in 2021 as after finishing second in the G3 races, she snatched up the same position in the G1 Del Mar Oaks in August; however, her next outings didn’t bring another positive result. In 2022, she commenced the new season with a victory in an Allowance race and was third in the G3 Buena Vista Stakes. She could use her advantage over her rivals here.

Neige Blanche, who keeps delivering excellent results, and in her most recent outing, she just seemed ready to take on every challenge she’s faced with.

Follow us on Social Media for Santa Ana Stakes updates!