Golden Pal rockets to the lead to win the Turf Sprint 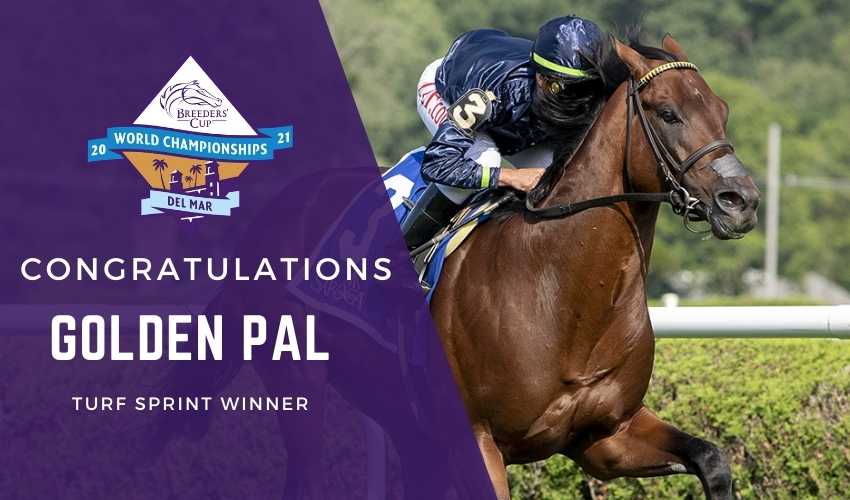 Now that is sprinting. Golden Pal came out of the gate like a getaway car and turned the Turf Sprint into his own personal procession, delivering a remarkable performance to earn his second victory at the Breeders’ Cup and give trainer Wesley Ward – trainer of Juvenile Turf Sprint winner Twilight Gleaming – his second winner of the weekend with brilliantly fast horses.

Last year the son of Uncle Mo ran off with the Juvenile Turf Sprint, and although he was favourite at 5-2 to add the senior version to his roll of honour, no-one expected such a dominant performance. It appeared a tight, competitive field beforehand, but in a matter of seconds Golden Pal had the race in the bag.

The son of Uncle Mo came out of the gate so fast the stewards might want to check the tape to see if his stall had opened early. It hadn’t; it was just horse power. In a dozen strides Golden Pal was two lengths clear under Irad Ortiz – who had ridden Twilight Gleaming – and he never saw another horse all the way around the track, just a burly bullet posting fractions that took his rivals off their feet.

Lieutenant Dan followed him like a chaperone but could never get close enough to threaten, and indeed the two pulled further away from their toiling rivals through the stretch. Golden Pal crossed the line a couple of lengths clear, stopping the clock in a lightning-fast 54.75 sec, and it was a long stretch of daylight back to Charmaine’s Mia in third.

“I don’t think we’ve ever had faster,” said Michael Tabor, one of the three owners famous for their success under the umbrella of Coolmore Stud. “Maybe Mozart, Stravinsky [Group 1 winners in Britain] but I don’t think there’s a comparison. I was just hoping Irad hadn’t gone too fast.”

He hadn’t. But much, much too fast for the opposition.

Follow us on Social Media for instant Turf Sprint updates!