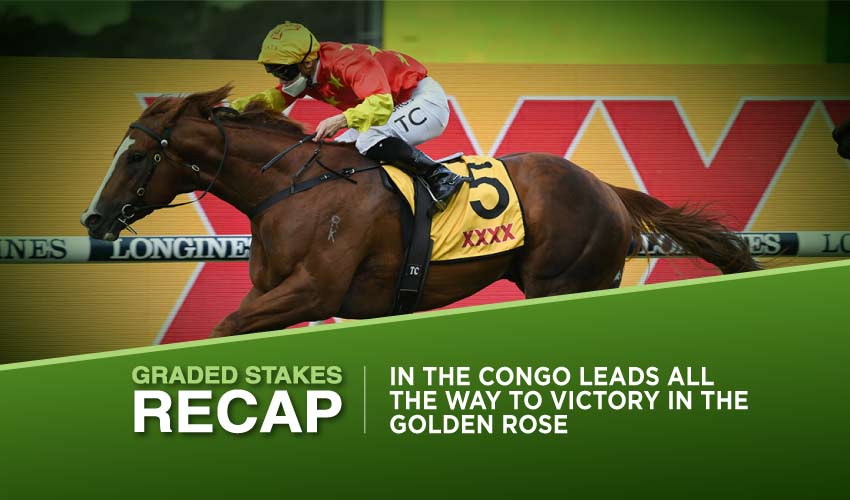 Although the lucrative bonus of A$5,000,000 for the winner of all three legs of the Golden Slam will be awarded neither this nor the following year, the three parts are still prestigious races of the Australian calendar and definitely worth of attention. On Saturday at Rosehill, Australia, the second leg called the Golden Rose Race was held and saw a thrilling finish of some classy three-year-old horses. In 2022, the winner can also compete in the third part of the Golden Slam, the Golden Eagle; however, he has already lost their means to reach the bonus as he failed to succeed in the Golden Slippers as a two-year-old youngster.

As it was said, this G1 turf race is open to three-year-old colts and fillies that clash at the distance of 7 furlongs. Anamoe (9-10) was the preferred participant to take most of the purse of A$1,000,000 given he won the trial over In The Congo (13-2), yet the latter’s tactic paid off this time, resulting in a tight victory of this handsome chestnut.

The Gai Waterhouse & Adrian Bott trained colt has won a G3 race in August and then finished second in the G2, and being a front-runner beaten by Anamoe in the last stride; it seemed he wouldn’t relish a longer distance. However, In the Congo just flew from the gate to the wire, making it look like there wasn’t anything easier for him than to drew clear of his rivals anytime he wanted to.

Under Timothy Clark, the chestnut broke away beautifully, set a swift pace at the front, and even though he was closely followed by Remarque () who seemed good enough to play a role here, his rival wer so tired in the final stretch he finished one but last. In The Conco didn’t display any sign of fatigue, though, and romping towards his first G1 success, he had to fear only those contestants with a brilliant turn of foot. Still, Anamoe and Artorius were too far away from the front to catch the leader.

Despite the fact Anamoe unfolded his finish and inch closer to In The Congo with each stride, he just failed to win by a head. The winner crossed the line in 1m 21.46s.

Artorius’ turn of foot was even more explosive; however, he rallied from such a bad position, he couldn’t possibly make an impact on the first two. He came short by a neck to get third place, which Coastwatch (25-1) managed to keep after running a huge race, confirming his continuous improvement since August.

The owner of In The Congo, Newgate Bloodstock, had four horses in the Golden Rose, so besides the winner, they took home fourth place thanks to Artorius, and also fifth and seventh thanks to Tiger of Malay and Captivant, respectively. All of them earned them some money here., making the race a very lucrative for their connections.