Goodnight Olive made her stakes debut winning the Ballerina 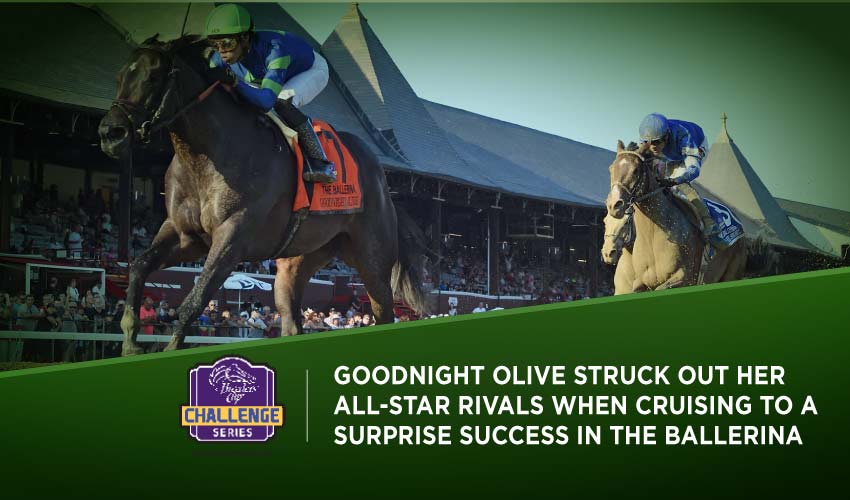 The biggest weekend of the year at Saratoga was capped by the G1 Ballerina on Sunday afternoon, the sixth top-level contest in two days and a race won by a filly making her stakes debut, as Goodnight Olive overturned several big names with a dominant display that booked her spot in the Breeders’ Cup Filly & Mare Turf.

Goodnight has a good day

Like a rookie from the minor leagues coming into Yankee Stadium and pitching a perfect game, stakes debutante Goodnight Olive struck out her all-star rivals when cruising to a surprise success in the Ballerina at Saratoga on Sunday, earning a paid berth into the Breeders’ Cup Filly & Mare Sprint.

The Ghostzapper filly was diving into deep water after a string of allowance victories and made the gate on just a three-week turnaround since her last start, but she extended her winning streak to five with an accomplished performance carrying the low weight in the field. The 5-1 fourth-choice stalked the pace laid down by longshot Travel Column before sweeping by with an eighth of a mile to travel and extending her advantage all the way to the wire under Irad Ortiz.

Goodnight Olive had two and three-quarter lengths to spare over the outsider of the seven Caramel Swirl, with second-choice Obligatory never a danger at any stage, coming along a length and a half further back in third. Last year’s champion distaff sprinter Ce Ce was a lukewarm fifth as favourite, while G1 winner Bella Sofia was a stone-cold last. The time was 1:21 and two-fifths.

It was a shock, despite the encouragement given for her chances by the tote board, because here Goodnight Olive simply blew away the established names in the distaff sprint division. The result illustrates the overall weakness in the division, given the relatively small pool of horses who populate it, but it also shows that there’s a new star on the scene.

“She’s had some soundness issues but now she’s finally got it all together,” said trainer Chad Brown, who was, a little surprisingly given his overall dominance at the Spa, winning the Ballerina for the first time. “You only get a few shots at these Grade 1s at a distance that I think might be perfect for her, so we thought we’d take a shot, and I was surprised when she powered away in the stretch against this deep field.”

Those soundness issues prevented Goodnight Olive running at two, and this was only the sixth time she has appeared on a racetrack. When she runs, though, she can really run, and now Brown will train her up to the BC Filly & Mare Sprint at Keeneland on November 5, when she will no doubt renew rivalry with several of the horses she vanquished here, including reigning champ Ce Ce, who sulked her way out of contention.

“If she doesn’t like the track, she won’t run,” said her rider Victor Espinoza, of the mare who is now zero-for-two at the Spa. “Maybe next time.”

Follow us on Social Media for more Ballerina updates!