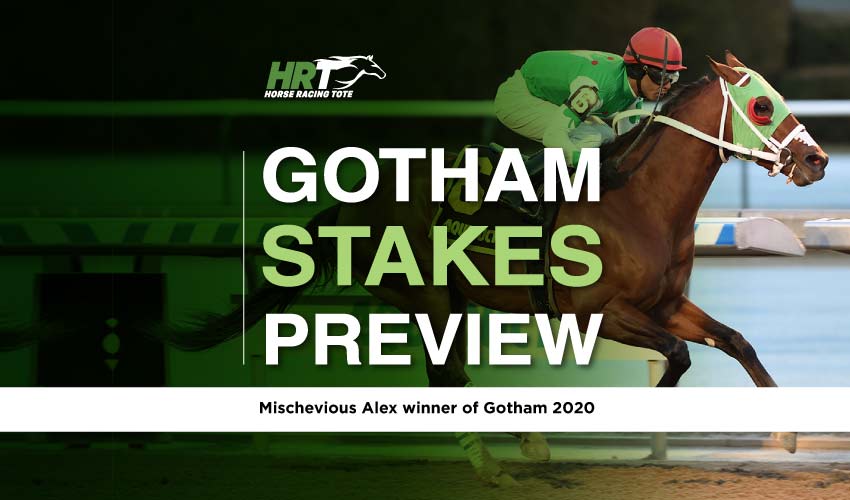 Gotham Stakes Preview: Saturday’s $300,000 Gotham Stakes (G3) at Aqueduct Racetrack is set to be the third of four Road to the Kentucky Derby qualifying races in New York. The one-turn mile event for 3-year-olds awards qualifying points on a 50-20-10-5 scale to the top four finishers.

Five possible entrants and four likely starters are expected for the Gotham Stakes.

The top names going into the race include Capo Kane, Freedom Fighter, Highly Motivated, and Wipe the Slate. Some of the possible contenders considering the race include Smiley Sobotka, Irish Honor, The Reds, Awesome Gerry, and Weyburn.

Capo Kane cuts back in distance

One of the leading runners, Bing Cherry Racing and Leonard Libert’s Capo Kane, is set to cut back to the one-turn mile distance for the Gotham. The runner’s last performance was a third-place run in the nine-furlong Withers Stakes (G3).

Trained by Harold Wyner, Capo Kane put in a training session on Feb. 26 at Parx Racing, where he completed a five-eighths breeze in 1:00.21. According to the trainer, Capo Kane ran straight in the work, which is notable given the runner’s tendency to often drift out in the stretch.

The California-bred Street Sense colt already has 12 Kentucky Derby qualifying points, with 10 coming from the one-mile Jerome and two from the Withers.

According to Capo Kane’s connections, the Kentucky Derby will be a possibility if the runner performs well in the Gotham Stakes.

Another one of the top runners likely breaking among the Gotham Field is Hall of Fame trainer Bob Baffert’s Freedom Fighter. The son of violence finished second last time out to stablemate Concert Tour in the San Vicente Stakes (G2) on Feb. 6. Prior to that, he won his debut at Del Mar, going five furlongs on Aug. 1.

Baffert is fairly inexperienced when it comes to the Gotham, having only run one horse. In 2019, the trainer’s Much Better finished fourth.
Jockey Manny Franco will be atop Freedom Fighter.

Wipe the Slate ships across country

He finished second going 6 1/2 furlongs in his debut at Del Mar on Nov. 22. He then went on to break his maiden on Dec. 26 at Santa Anita after winning a seven-furlong sprint by 3 1/4 lengths.

Wipe the Slate made his sophomore and graded stakes debut in the 1 1/16-mile Robert B. Lewis (G3) at Santa Anita on Jan. 30. In that outing, he finished sixth after bumping another runner and falling back late in the race.

Following his Robert B. Lewis performance, Wipe the Slate has been training forwardly. He put in a six-furlong work in 1:11.60 on Feb. 27 over the Santa Anita main track. His connections hope he enters the Gotham Stakes well following a five-week gap between runs, and they believe the cut back in distance could benefit him.

Saturday’s Gotham Stakes will be the race’s 69th edition.

Make sure to check Horse Racing Tote for the latest horse news and updated odds on the Road to the Kentucky Derby.