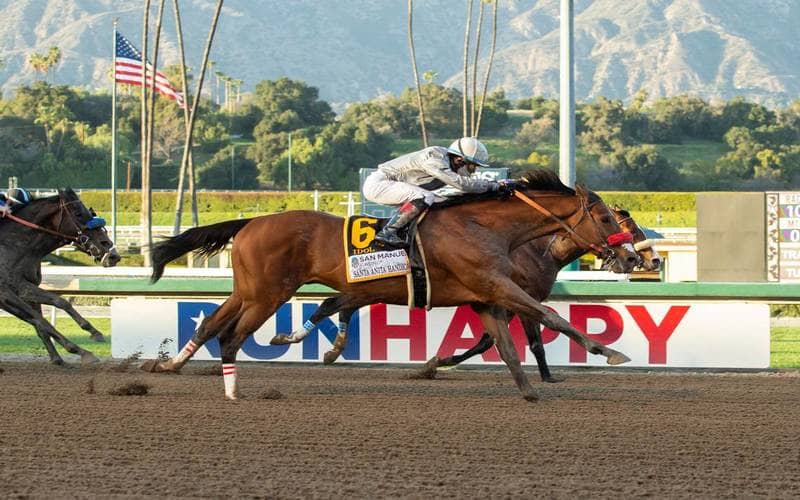 The 30th running of the Challenger Stakes for 4 year olds and up over 1 1/16th over the Tampa Bay Downs main track; was won gate to wire by the 7/5 favorite Last Judgement. Modernist closing for second and War Stopper finishing third.

For 4 and up Fillies and Mares at 1 1/8th over the Tampa turf course was won by 9/2 Micheline; in a driving finish beating Morning Molly by a length and New York Girl finishes third.

Next up at Tampa Bay was the Florida Oaks (G3T)

Three year old fillies at 1 1/16 on the turf course, 3/5 favorite Jouster lead the whole way only to get caught at the wire by Domain Expertise (5/1) and Oyster Box was third.

The final big race at Tampa was the Tampa Bay Derby (G2) over the 1 1/16th main track in a race worth 50 Kentucky Derby points.  Hidden Stash at 3/1 caught Helium (15/1) down the stretch and the two went head and head only to have Helium pull away for the win.  Hidden Stash gets second and Moonlight Strike gets third.

The 8/5 favorite Candy Man Rocket was unimpressive and never was a factor in the race.

They had a pair of graded races in the Gotham but also the 46th renewal of the Tom Fool Stakes.  The Tom Fool Stakes (G3); at 6 furlongs over the Aqueduct main track was won in impressive front running fashion by Chateau; 3.5 lengths ahead of Wendell Fong who was another 2 lengths ahead of Speed Pass. The Gotham Stakes for three year olds; and worth 50 Kentucky Derby points to the winner was a nose victory by 46/1 Weyburn beating Chad Brown; trainees Crowded Table and 4/5 favorite Highly Motivated.

In the final three year old race of the day

Santa Anita offered the San Felipe graded races; over 1 1/16th and featured the second choice in the KY Derby future pool Life is Good who was 9/2 to win the Run for the Roses.  Life is Good (1/2) sprinted out early and led throughout the race turning for home drew; off to lead by as much as 9 lengths and won by eight overstable mate Medina Spirit with Dream Shake getting third.  Next up at Santa Anita was the Grade 2 San Carlos over 7 furlongs for older horses.

Cal-Bred Brickyard Ride gave jockey Alexis Centeno; a ride right into the winners circle as he rolled to an easy five length victory over Tigre Di Slugo and Exaulted who got third.