GRADED STAKES RACES FOR THIS WEEKEND 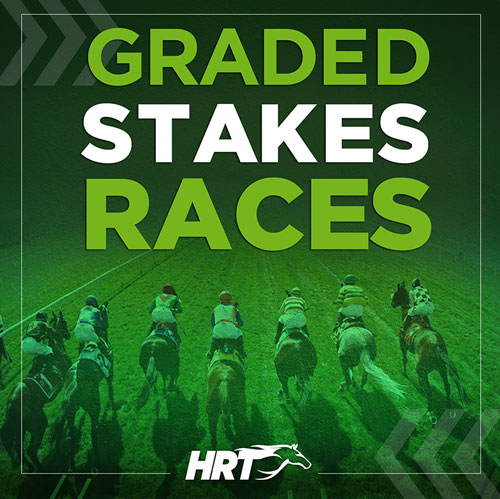 As we move one more week closer to the Kentucky Derby presented by Woodford Reserve (G1), this weekend is set to see some big graded stakes races. Horse racing’s richest race will take place overseas, along with multiple stakes races at tracks like Laurel Park, Gulfstream Park, and Santa Anita.

Here is a look at this weekend’s top graded stakes races, all being run on Saturday:

The most highly anticipated race of the weekend is undoubtedly the $20 million Saudi Cup at Abdulaziz Racetrack in Riyadh, Saudi Arabia. It is only the second edition of the race, and this year’s field is being led by names like Knicks Go (+250) and Charlatan (+175).

The Brad Cox-trained Knicks Go is coming into the race following a victory in the Jan. 23 Pegasus World Cup Invitational Stakes (G1), while the Bob Baffert-trained Charlatan will make his first start of the year. The international field of 14 horses will cover 1 1/8 miles.

The $250,000 Barbara Fritchie is one of the top graded stakes races on Laurel Park’s card. Covering seven furlongs, it is open to 4-year-old-and-up fillies and mares. The field of eight is led by Hello Beautiful (+150) as the favorite and Sharp Starr (+300) as the second choice.

Hello Beautiful is a 4-year-old Golden Lad filly with a career record of 7-2-1 and total purse earnings of $377,110. She is coming into the Barbara Fritchie following a win in the Jan. 16 What a Summer Stakes (Black Type) at Laurel Park.

The highlight graded stakes race on the Laurel Park card is the $250,000 General George Stakes, which is open to 4-year-olds and up. The race covers seven furlongs, and the field of 10 is led by names like Funny Guy (+175) and Share the Ride (+275).

Coming in as the favorite, Funny Guy is a son of Big Brown. The 5-year-old has six wins and six seconds from 17 career runs, and his most recent performance was a runner-up effort in the Jan. 9 Say Florida Sandy Stakes (Black Type) at Aqueduct.

A 6-year-old gelding from Candy Ride, Share the Ride is the second choice. He is 8-4-5 from 22 lifetime starts and has total purse earnings of $407,860. He is coming into the General George following a third-place run in the Jan. 30 Toboggan Stakes (G3) at Aqueduct.

Gulfstream Park’s highlight graded stakes race is the $100,000 Royal Delta. The event for 4-year-old fillies and mares will see a field of eight runners cover 1 1/16 miles.

The favorite coming into the race is Mrs. Danvers (+180), last running back on Nov. 27 in a victory in the Comely Stakes (G3) at the track. She will be up against the second-choice Eres Tu (+300), who finished first in the Dec. 26 Allaire DuPont Stakes (G3) at Laurel Park.

Santa Anita’s top contribution to this weekend’s graded stakes races is the $200,000 Buena Vista, with the field of 4-year-old-and-up fillies and mares being led by favorite Charmaine’s Mia (+300). The 5-year-old mare from The Factor scored the Jan. 9 Las Cienegas Stakes (G3) last time out at the track.

Make sure to check Horse Racing Tote for all the latest news on the Kentucky Derby Prep Races and for current fixed odds check here: Racebook Tote.