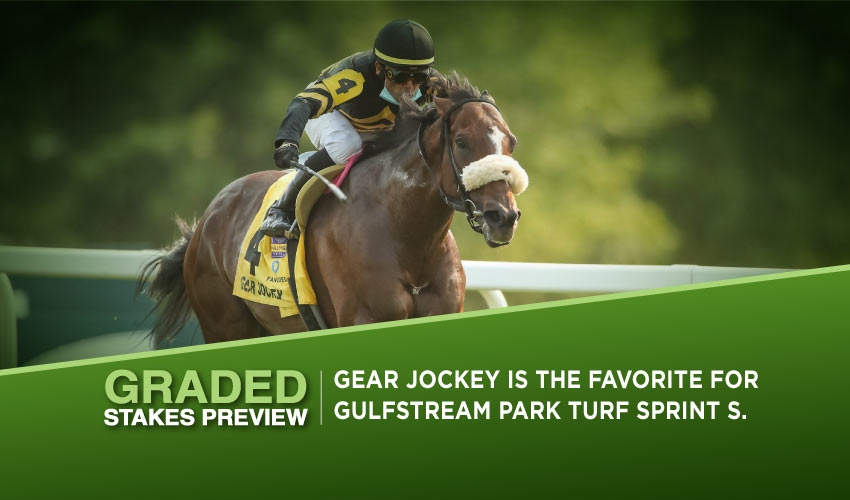 Saturday’s cards at the Santa Anita Park and Gulfstream Park feature a couple of interesting Graded races, which we’re about to cover in this preview. At first, let’s take a look at the Gulfstream Park Turf Sprint Stakes where Gear Jockey should make amends for his Breeders’ Cup Turf Sprint performance, and then we’ll focus on the Sweet Life Stakes where Urban looks to shine among three-year-old fillies.

In this G3 turf race held at the distance of five furlongs, a field of seven four-year-old and older sprinters will compete for the purse of $100,000. There isn’t much to discuss here as five-year-old Gear Jockey trained by George R. Arnold II is the hot favourite here, given he’s been very progressive throughout the 2021 season, bagging the G3 Turf Sprint Stakes at the Kentucky Downs.

Although he was only sixth in the Breeders’ Cup Turf Sprint, he’s definitely capable of achieving big victories, so winning Saturday’s race shouldn’t be difficult for him. At first sight, there’s just one rival who might look like a distant threat to the favourite, eight-year-old Belgrano, who took third place in the G3 Tropical Turf Stakes last time out.

Our betting pick for the Gulfstream Park Turf Sprint Stakes is Gear Jockey, whose class is way above the rest. Anything else but a victory would be disappointing of him.

The purse of $100,000 attracted a field of 10 three-year-old fillies who will cover the distance of six and a half of furlongs. The G3 turf race seems to have its favourite in Simon Callaghan’s bay filly Urban, who has five starts under her belt, including a tight victory in a maiden last time out.

She’s already recorded fourth place in a Listed company; however, it took her some time to strike gold, while she did so thanks to her finish in front of Kitty Katana. The Philip D’Amato filly was out just for the second time but performed quite well, so she’s undoubtedly a place contender. Ouraika’s abilities are in question because she won a maiden in France, upon which she ran in fourth in a Listed race, but then she didn’t use weight advantage to score an Allowance Optional Claiming.

She’s in the mix, but we think the favourite’s main threat is Peter Eurton’s dark bay I Got a Gal, breaking her maiden at the fourth time. In December, she stumbled out of the gate, yet in the end, she successfully charged for the lead, fighting for the victory till the very end. I Got a Gal put her below par performances on dirt behind, suggesting her future lies on the turf, still, she shone over a bit longer distance.

To be honest, none of these fillies is looking sharp enough to line up with the three-year-old elite of turf fillies, but they might surprise us.

Our top pick for the Sweet Life Stakes is I Got a Gal, who caught our eyes thanks to her most recent effort.

Join us at Jazzsports and make sure to stay tuned for the latest fixed horse racing odds, racing entries.