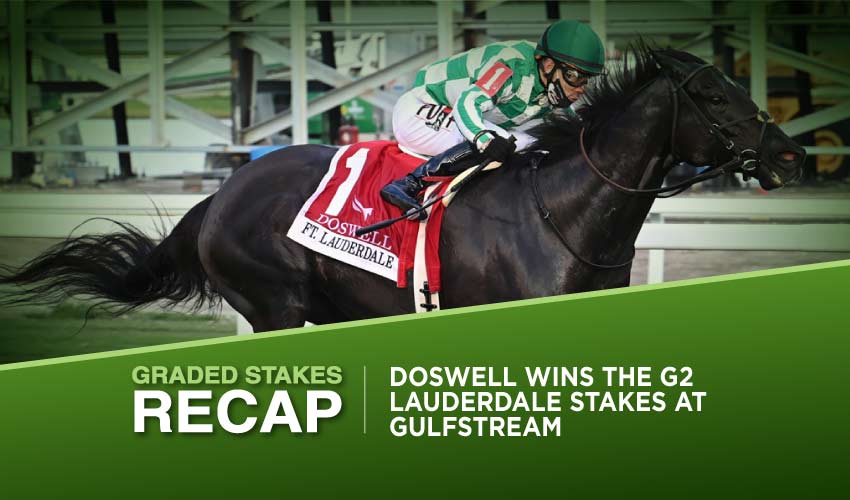 Gulfstream Park belonged to trainer Todd Pletcher and jockey Luis Saez on Saturday, both men going home with Graded-stakes doubles. Pletcher got the ball rolling with Sweet Melania in the Suwannee River, Saez followed suit with Center Aisle in the Sugar Swirl, and the pair combined with the impressive Fearless in the Harlan’s Holiday. The feature event of the day, the Grade 2 Ft Lauderdale, played out as a comfortable win for the Barclay Tagg-trained Doswell. Here is our Gulfstream Park Weekend Recap.

Doswell does it well

A spot in the Pegasus World Cup Turf may be next for Doswell, who got his ticket stamped with a flamboyant gate-to-wire success in the Ft. Lauderdale at Gulfstream Park, the centrepiece of Saturday’s stakes-heavy card.

The Barclay Tagg-trained six-year-old had been runner-up in the race 12 months ago and went one better here, out fast from his inside post for a game of catch-me-if-you-can, and no-one could. The 9-2 third-favourite set a steady pace, twelving them to death, and although Atone threw down a challenge on the turn Doswell put him away with the minimum of fuss, cruising home by a length and a half.

Longshots crowded out the board, Atone second at 17-1 and English Bee a half-length back in third at 21-1. The favourite L’Imperator was a never-dangerous fifth, as Doswell stopped the clock in 1:45 and three-fifths.

“It was nice and easy,” said winning rider Junior Alvarado. “He broke good, I put him on the engine a little bit and then tried to slow him down. When we turned for home, I asked him and he gave me a nice kick. He picked up very quickly and I thought they’d have to be flying at the end to go by.”

The victory was Doswell’s first at stakes level and his first of 2021, his record now three-for-12 lifetime. Of a return to Gulfstream at the end of next month for the Grade 1 Pegasus, Tagg said: “We’ll probably go in it. We’ll see how he comes out of this and see if he freshens up, I don’t want to take him there and make a fool out of him.”

Trainer Todd Pletcher and jockey Luis Saez both signed for two Graded-stakes wins on the day, wrapping up their doubles in style as the 3-5 favourite Fearless demolished the opposition in the Harlan’s Holiday.

The five-year-old had already established his affection for the Miami track and took his record here to four-for-five with a dominant display, sitting in behind as the one-eyed Mighty Heart towed the field through the first half-mile. Fearless made his move on the far turn and was soon in front, and then it was only about time – 1:42 and one-fifth – and distance – four lengths – as the big gelding cleared away to the wire.

South Bend came from a long way back to be second, with Canadian champion Mighty Heart a length and a quarterback in third. The Harlan’s Holiday is a recognized prep for the Grade 1 Pegasus World Cup here on January 29, and Fearless is now under consideration for the big prize, which will match him against likely Horse of the Year Knicks Go and Breeders’ Cup Dirt Mile winner Life Is Good.

“He’s a horse who always tries,” said Saez. “Everything worked out perfect. Coming to the top of the stretch I had a lot of horse under me and he did it very impressively, he gave me a great response.”

It has been a perfect year for the improving Center Aisle, who is three-for-three in 2021 after making her breakthrough at stakes level in the Sugar Swirl. She is beginning to pay back the faith, if not yet her initial cost, that saw her fetch $1.5 million as a two-year-old in training in March 2019.

The Into Mischief filly had found Frank’s Rockette too strong both times they met last year, but gained revenge on her nemesis after a thrilling stretch duel, seeing off the even-money favourite after the pair had been head-and-head from the top of the lane. Center Aisle – partnered by Luis Saez, winning his first Graded race of two on the day – got the job done by a length, paying out at $6.20, stopping the clock in 1:09 and one-half; there were five lengths back to Bronx Beauty in third.

“We got her in June with high expectations and she has been running really well,” said trainer Paulo Lobo. “She was really ready for this race, which has been our plan all along. I think the outside post position helped us, and having Luis on my side also helped very much.”

Center Aisle is now four-for-eight lifetime and is booked to come back to Gulfstream for the Grade 2 Inside Information, over an extra furlong, on January 29.

Todd Pletcher initiated his double when Sweet Melania returned to winning form in the Suwannee River, breaking a seven-race losing streak with a gutsy half-length score under jockey John Velazquez.

The four-year-old daughter of American Pharoah won the Grade 2 Jessamine at Keeneland at two and ran third in the Breeders’ Cup Juvenile Fillies Turf, but she had lost her way since then. On her return to Graded company after five starts at a lower level, the 6-1 shot showed her class with a battling display.

Sweet Melania chased the favourite Shifty She to the top of the lane, whereupon she took command and, although she never opened up daylight to her pursuers, always looked to have something in hand. Shifty She was game but unavailing in the runner-up spot, half a length ahead of the late-closing In A Hurry. The time for the mile was 1:34 and one-fifth.

“She was super sharp coming into this and she got a beautiful ride from Johnny,” said Pletcher, who is considering a return to Gulfstream for the Grade 3 Pegasus Filly & Mare Turf on January 29. “I felt she had been coming back into form and had some good performances and just didn’t quite get there. We were hoping for improvement and got it.”

Make sure to stay tuned for the latest Racing Odds, and Horse Racing Entries. Sign up and get a 10% rebate.