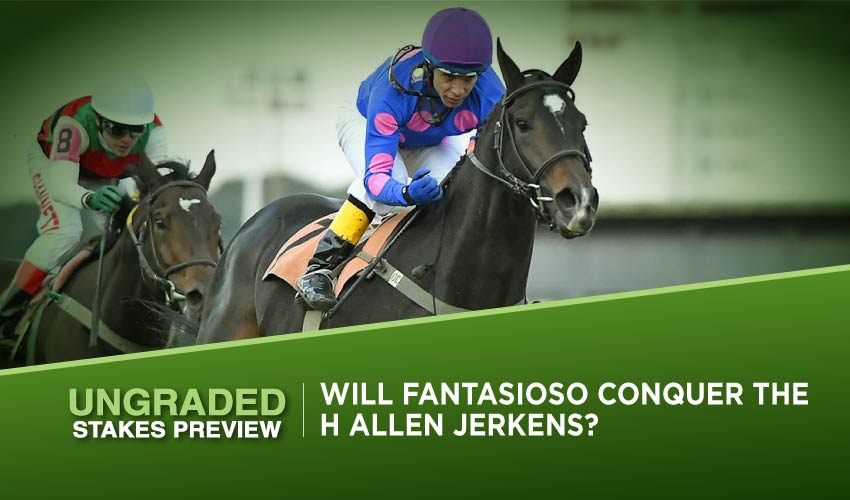 The centrepiece of the Christmas Eve action at Gulfstream Park is the H Allen Jerkens Stakes, a quirky gift for racefans who enjoy a challenge. Two miles on turf is a specialist test and the contest is headed by experienced stayers Fantasioso and Ajourneytofreedom, second and third in a similar event at Belmont Park in June.

Races over this distance are an oddity in the US, with such an excessive test of stamina meaning both horses and bettors are going into the unknown. Previous form at shorter distances may look promising, but if a horse can’t raise a gallop for the whole two miles then previous form becomes an irrelevance.

The Allen Jerkens Stakes is clearly something that trainer Mike Maker has on his Christmas list, for he sends four to the gate – almost half the field – including two of the leading contenders. Bluegrass Parkway spots weight all round and brings solid form to the table, with victory in a stakes at Ellis Park over ten furlongs, when he needed every yard to eventually put his head in front, followed by third place in a Belmont stakes over a mile and a half, in which he lacked the change of gear to trouble the front two. This stiffer test may well suit his running style.

Barnmate Ajourneytofreedom, who has only one win in his last 15 starts but is usually on the scene, ran fourth in the Grade 2 Calumet Turf Cup over a mile and a half at Kentucky Downs and third in the Grade 2 Belmont Gold Cup over the full two miles. He did his best work in the closing stages there, seeing out the distance effectively if not dazzlingly, and he at least can be counted on to be grinding it out when others have cried enough.

Maker’s remaining pair are making their stakes debut; Malthael won an allowance at Keeneland over a mile and a half two starts ago, his only win in his last 14 races, while Jarreau has never been beyond a mile and three-eighths or won above claiming grade.

Former Argentinian ace Fantasioso is zero-for-seven in the US but has form that puts him right in the mix, notably when runner-up in the Belmont Gold Cup, a length ahead of Ajourneytofreedom. He has the stamina, but comes here off the back of two lacklustre efforts – including behind Malthael at Keeneland – and his inconsistency is a concern. His compatriot Nixon Joy is zero-for-nine since winning on debut and has been doing all his running over a mile on dirt.

The lightly raced Abaan has been in good order during 2021 and comes here off his lifetime best, when he went gate-to-wire in an Aqueduct allowance to beat Jarreau by two lengths. That was at a mile and three-eighths – he stays a mile and a half and if he can control the pace it’s possible he could stretch out even further.

The unusual demands of the H Allen Jerkens mean that stakes should be kept small, and the consistency of AJOURNEYTOFREEDOM gives him a slight edge over Fantasioso.