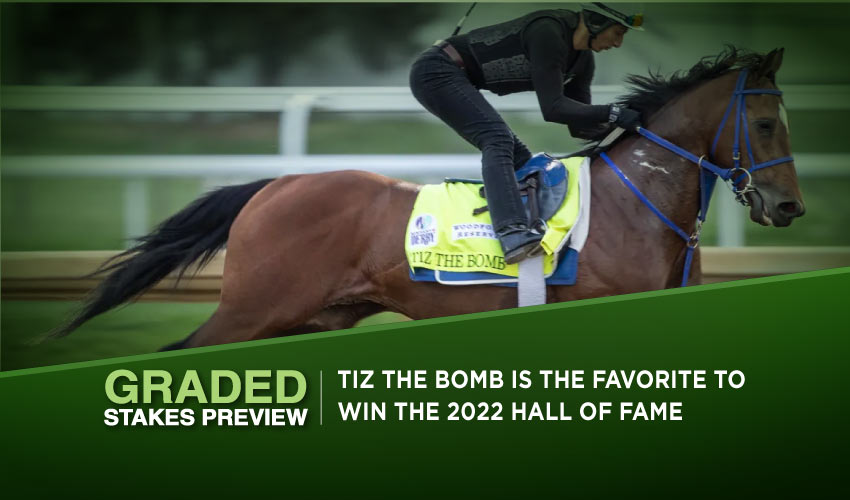 It’s all happening on the lawn at Saratoga on Friday, where Wit gets his first chance on the weeds up against Breeders’ Cup Juvenile Turf runner-up Tiz The Bomb in the G2 National Museum of Racing Hall of Fame. Elsewhere, the dazzling BC Turf Sprint winner Golden Pal will be a hot favorite to add the G3 Troy to his roll of honor.

Turf or dirt? Or something else? Surface requirements are front and center in the National Museum of Racing Hall of Fame, the highlight of Friday’s action at Saratoga, with questions hanging over the leading contenders.

This will be the first start on turf for Wit (4-1), who made a reasonably decent name for himself on the main track, especially last year when he won the G3 Sanford and ran second in the G1 Hopeful at this circuit.

Connections have decided to shift him to the weeds after a flat performance when fourth in the G1 Woody Stephens at Belmont Park in June, and he has been firing bullets on the training track in recent weeks. His pedigree suggests turf will suit, and although Wit has never won at a mile it’s unlikely that the distance will prove a barrier to success.

The surface is also key to the fortunes of Tiz The Bomb (7-2), who was also top-dollar on the lawn at two – runner-up in the G1 Breeders’ Cup Juvenile Turf – but was then sent down the Kentucky Derby trail with mixed results.

He demonstrated an affinity for Turfway Park’s synthetic surface, winning twice there including the G3 Jeff Ruby Steaks, but broke slowly in the Derby itself and made no show. A return to turf in the G1 Belmont Derby was a stone-cold failure, Tiz The Bomb trailing all the way before finishing ninth.

Now he cuts back to a mile for the first time since last September, but that seems something of a ‘Hail Mary’ and for all his evident ability Tiz The Bomb is looking a little directionless.

For all the uncertainty surrounding them, this pair has a clear class edge over Stolen Base (8-1), who has finished behind Tiz The Bomb all five times they’ve met, most recently when plumb last of 12 in the Belmont Derby.

When things go his way he shows his talent, notably when an authoritative winner of the G2 American Turf at Churchill Downs over a mile-sixteenth in May – with the plateauing Dowagiac Chief (12-1) last of ten – but his inconsistency means he can’t be relied upon, and he is cross-entered in the Saratoga Derby on Saturday.

There are several less-exposed contenders, prominent among them being Double Clutch (5-1), who makes his Graded-stakes debut after a promising showing in a mile stake at Belmont, when after a slow start he finished off his race best of all to take the place spot, a half-length ahead of Ready To Purrform (9-2) in third and a length and three-quarters clear of fourth home Chanceux (6-1), zero-for-five in stakes. That was only his third start and Double Clutch is sure to move up for the experience.

Wow Whata Summer (20-1) has already won at this level, but his success in the soft-ground G2 Penn Mile can be taken with a large pinch of salt given the taint of fluke implied by his 83-1 odds and his subsequent sound defeat in the G3 Kent Stakes at Delaware Park. Another upset is unlikely.

There has long been a sense that WIT is a high-class horse waiting to happen, and the switch to turf and the step up to a mile at a track that suits can make the difference.

We all know the story of Dr. Jekyll and Mr. Hyde, the man with two distinct personas, one very good, and one very bad. In the Troy Stakes, we find a horse with a very similar profile, depending on his whereabouts in the world he is.

In the US, Golden Pal (1-2) is a superstar. In Britain, he’s hopeless. He has failed miserably on his last two starts over there, most recently when last of 16 in the G1 King’s Stand at Royal Ascot, when he wasn’t helped by a bad ride from Irad Ortiz, who wasn’t even looking the right way when the gates opened.

Ortiz, who has never lost aboard Golden Pal in the US, has his chance to make amends today, and if the four-year-old is in his usual hometown form he will be almost impossible to beat. A repeat of his all-the-way score in the G2 Shakertown at Keeneland, or in the G1 Breeders’ Cup Turf Sprint at Del Mar, is all he’ll need to post a third victory over this course and distance.

The biggest threat may come from the veteran True Valour (8-1), who has been in excellent form this year – following a 13-month layoff – and was beaten only a length into third in the G1 Jaipur at Belmont Park in June. Exacta players may need to look no further, although his freewheeling style may clash with Golden Pal’s similarly explosive tactics.

Last year’s Troy runner-up Carotari (6-1) hasn’t been at the same level since and comes here off the back of a poor effort in a Monmouth Park stakes in June, although he has never been off the board at the Spa and shouldn’t be ignored. He is preferred to Spycraft (15-1), a stakes winner at little Canterbury Park last time out and in a different league today.

David Donk puts two in the gate with Thin White Duke (30-1), coming back off just an eight-day turnaround after finishing runner-up in an allowance here, joining Yes And Yes (12-1), who blew a three-race winning streak when last of 11 in the G3 Forbidden Apple Stakes over a mile here last month, his Graded-stakes debut.

Arzak (9-2) has been making hay at Woodbine this year, winning the G3 Jacques Cartier on the all-weather and runner-up in the G2 Highlander Stakes on turf, but Canadian form doesn’t play so well over the border and he’ll need a lot more.

The electrifying GOLDEN PAL is six-for-six in the US after defeat on his debut, and everything looks in place for another blitzing all-the-way success.

Follow us on Social Media for more National Museum of Racing Hall of Fame Stakes updates!