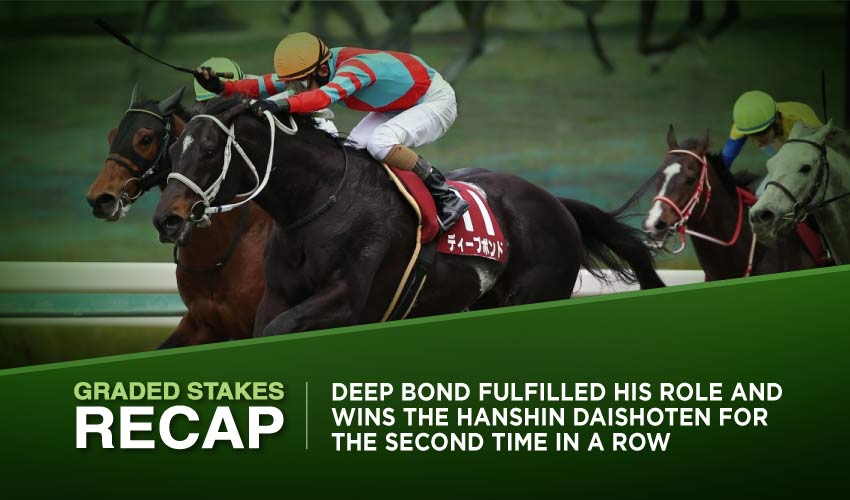 The past weekend was once again packed with Graded actions at the Japanese tracks. The G2 Hanshin Daishoten, was taking by Deep Bond. Saturday also offered three-year-old colts in the G3 Falcon Stakes in Chukyo Racecourse, where Purpur Ray had an as smooth trip as it can get, which he used to win decisively.

Be Astonished managed to hold off Arrival in the G2 Spring Stakes at the Nakayama Racecourse. On Sunday, Nakayama witnessed the victory of three-year-old filly Stunning Rose in the G3 Flower Cup.

The G3 turf race was open to three-year-old colts who clashed at the distance of seven furlongs, where Purpur Ray (18-5) scored easily under Mirco Demuro. The Naosuke Sugai bound bay showed off an eye-catching finish in the final stretch and snatched most of the purse of 76,910,000 Yen, crossing the wire in 1m 20.90s.

Taisei Divine (54-1) delivered a surprisingly ponent finish as well when rallying forward to secure a second place, one and ¾ of a length behind the winner, while Otaru Ever (93-10) stayed on in the third.

The victor perfectly used the inside gate as he jumped out to settle at the fence in the midpack; however, he got pretty lucky in the final stretch as spots kept opening in front of him. Therefore, Purpur Ray easily slipped past some of his rivals, and once the jockey asked him to charge, he bolted up beautifully.

By Saturday’s triumph, he achieved his premiere Graded win as previously; he failed to impress both in the G1 and G2. The preferred contestant of the race, Toshin Macau (14-5), faced problems with the lack of space, so he managed to take only fifth place, bettered also by fourth Devils Marble (71-10).

The G2 race was held at the extreme distance of a mile and seven furlongs. 13 four-year-old and older horses competed for the purse of 129,020,000 Yen on the turf surface where favorite Deep Bond (1-5) fulfilled his role and won the race for the second time in a row.

The five-year-old horse piloted by Ryuji Wada carried the biggest weight here; still, he managed to fight off Iron Barrows (185-10) by ¾ of a length, crossing the wire in 3m 5.00s. Silver Sonic (135-10) was a bit unlucky in the closing stages and had to settle for third.

As You Can Smile (228-10) set the pace at the front, Deep Bond spent his first start of the season 2022 in sixth place. At the final turn, the Ryuji Okubo trained bay improved his position, and as soon as the field turned for home, Deep Bond was third and lurking behind currently leading Iron Barrows.

The five-year-old bay proved to be a strong opponent for the favourite as he fought bravely, yet Deep Bond is just somewhere else in terms of his class, given he finished second in both the G1 Tenno Sho Spring and Arima Kinen, so his Saturday’s victory was definitely expected.

In the end, Deep Bond prevailed but both Iron Barrows and Silver Sonic also performed very well, while Machaon d’Or (66-10) also delivered his standard when finishing fourth in front of fifth You Can Smile.

Nobody else delivered such a thrilling finish to fight the victory, rendering Satono Helios (11-1) snatch just third place.

Although the Yuzo Iida bound Be Astonished hasn’t won a Graded race date until this weekend, he grew into a reliable specimen as upon winning his debut, he showed up in three G3 races and collected second, fourth, and third place.

The Spring Stakes is a trial for the upcoming 2000 Guineas, and despite the fact we don’t see Be Astonished as one of the favourites for the feat, he should be expected to take care of the pace, which he did on Saturday. He used the inside gate to rally forward immediately and subsequently didn’t allow anybody to better him even though he was weakening in the closing stages and talented Arrival was getting closer with each stride.

Especially Arrival, led by Christophe Lemaire, looks interesting for the next outings. Behind third Satono Helios, fourth Engidaruma (36-1) and fifth Dio (173-10) took the remaining pieces of the offered purse.

The purse of 71,210,000 Yen attracted a field of 12 three-year-old fillies who met at the distance of a mile and a furlong. On the turf surface, Stunning Rose (17-5) drew on her February victory at the Stakes level and by a half of a length, she prevailed in this G3 event in 1m 48.50s.

Rolling forward in the final stretch, he sentenced Nishino Love Wink (36-1) to a second place after a brave performance, while Scintillation (27-10) charged to the front from the outside to snatch up the third place.

Under Yuga Kawada, Stunning Rose was expected to win; however, she still sort of had to deny her below-par effort in the G2 Daily Hai Nisai Stakes, where she finished only fifth in a field of six juniors.

On Sunday, she proved to belong at least among G3 fillies, but only time will tell whether she’s able to shine in a better company. As she galloped behind a couple of leaders, the Tomokazu Takano trained bay challenged Nishino Love Wink in the final stretch and scored the race with nobody else really threatening her.

Scintillation grabbed third place as she was too distant from the front when rallying, so she only left Dime (167-10) in fourth and Dainty Heart (68-10) in fifth.