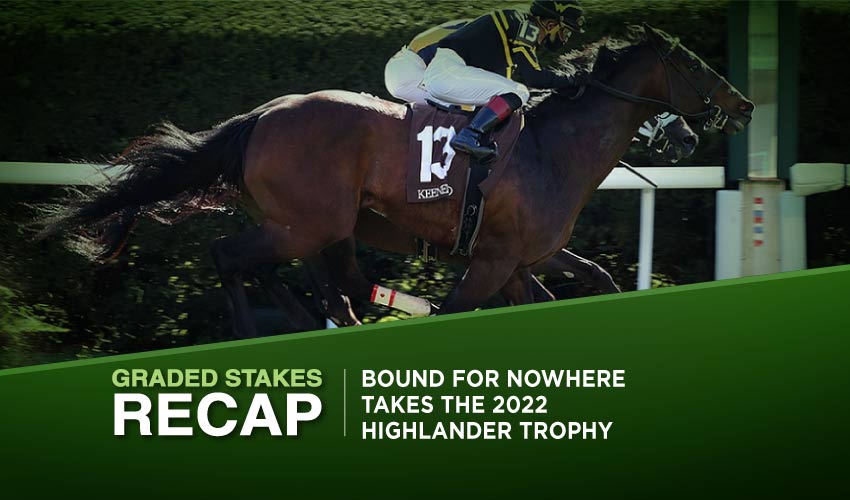 The star of the show at Woodbine on Saturday was the veteran sprinter Bound For Nowhere, who added another stamp to his passport when winning the feature G2 Highlander. There was a thriller in the G2 Nassau, with home favorite Lady Speightspeare and Crystal Cliffs locked together at the line in a dead-heat, while three-year-olds Rondure (G3 Marine) and Souper Hoity Toity (G3 Selene) ran themselves into contention for the big Canadian Classics later in the summer.

He has seemingly always been bound for somewhere, as this is the fourth country in which he has raced after visits to Britain and France, and Bound For Nowhere made his first visit to Canada a profitable one when winning the Highlander, the main event at Woodbine on Saturday.

Success didn’t look likely at the quarter-pole as the eight-year-old was trapped behind a wall of horses, but a furlong later there was a chink of daylight through the darkness and the 5-1 fourth-choice surged into it, running down Arzak in the last sixteenth to win by a length, stopping the clock in a tick over 1:08. The longshot White Flag rallied strongly for third, a neck further back, while the favourite Voodoo Zip was a never-dangerous fifth.

“I was sitting on a ton of horse,” said jockey Pablo Morales. “I was getting a little worried there but I’m glad I was able to work out a trip. When I put him in the clear and he felt a little bit of room, he just took off.”

Bound For Nowhere has been ambitiously campaigned by trainer Wesley Ward, with his best effort overseas a third-place in the G1 Diamond Jubilee at Royal Ascot in 2018. He is still a full horse and holds his form remarkably well, this victory making him two-for-two this year and nine-for-19 lifetime.

Dead-heats are much rarer now that modern technology can zoom in to a pixel, but nevertheless the camera couldn’t split Lady Speightspeare and Crystal Cliffs in a thrilling conclusion to the Nassau.

Lady Speightspeare, maintaining her 100 per cent record at Woodbine on her return after an unsuccessful sojourn below the border, made a bold bid to go gate-to-wire but was overhauled in mid-stretch by Our Flash Drive. However, the 5-2 favourite showed deep reserves of courage to regain the lead before being joined on the line by the hard-charging 3-1 third-choice Crystal Cliffs. Our Flash Drive faded into third, beaten a length; the clock showed 1:32 and two-fifths.

The victory was the 2,000th in a long career for Lady Speightspeare’s trainer Roger Attfield, who has trained six Canadian Horses of the Year and won 20 Canadian Triple Crown races, and the Hall of Famer was delighted to reach the milestone.

The winning jockeys, Emma-Jayne Wilson on Lady Speightspeare and Rafael Hernandez on Crystal Cliffs, both paid tribute to the veteran trainer.

“Roger is a legend and this filly is pretty special too,” said Wilson, while Hernandez said with a grin: “I couldn’t let Roger have his 2,000th win too easy – that’s why I made it a dead-heat!”

Rondure puts it on a Plate

The Queen’s Plate is the next stop for Rondure, who put down a marker for Canada’s most prestigious race with a thoroughly dominant victory in the Marine, his first at stakes level.

The 4-1 second-choice sat behind the early pace of the favourite Ironstone until Rafael Hernandez sent him to the lead around the turn, and Rondure soon put the race to bed, clearing right away through mid-stretch to win by five and a half lengths in a time of 1:43 and one-half. Duke Of Love ran on stoutly to beat out Ironstone for the runner-up spot by a neck.

“It’s business as usual when it comes to the horse,” said trainer Katerina Vassilieva. “I’m just going to do what I always do – try to take the best care I can of the horse, do right by him, and hopefully we get to the Plate and get to have some fun. It’s exciting.”

Rondure, a son of Oxbow, is now two-for-five and will head straight for the $1m Queen’s Plate, a ten-furlong contest restricted to Canadian-breds, back at Woodbine on August 21. The Plate is the first leg of the Canadian Triple Crown, preceding the Prince of Wales’s at Fort Erie on September 13 and the Breeders’ Stakes back at Woodbine on October 2.

It would be an unusual afternoon at Woodbine without a major win for Mark Casse, and the trainer made his mark when 8-1 chance Souper Hoity Toity pulled off a slight upset in the Selene, making her stakes breakthrough and providing Casse with his fifth straight win in the race and his seventh overall.

After her barnmate Join The Dance had set dawdling fractions, Souper Hoity Toity steadily hunted down the leader before putting her nose into the wind at the eighth-pole and keeping on well, turning back the challenge of even-money favourite Catiche to win by three-quarters of a length, with the clock showing 1:45 and change.

“Nobody wanted the lead and my filly was a little bit rank,” said jockey Patrick Husbands. “Everybody had to fight for position on the first turn and then I turned mine loose, and she was going so easy down the backstretch.”

This was the third win from five starts for Souper Hoity Toity, who was having her first outing of 2022. She is now a probable contender, along with the second and third, for the Woodbine Oaks – the first leg of the Canadian Triple Tiara – over a mile-eighth on July 24.

Follow us on Social Media for Highlander & Woodbine updates!