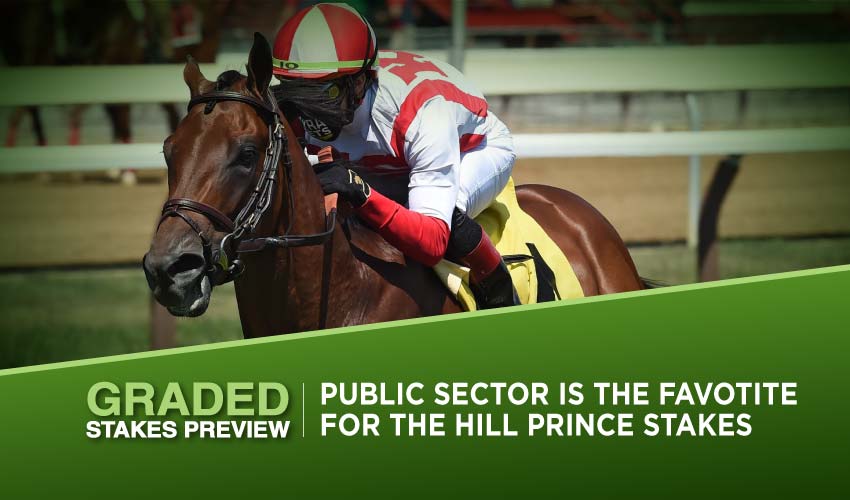 The build-up to next month’s Breeders’ Cup understandably lacks top-level competition, but there’s plenty to get excited about in New York on Saturday when in-form trainer Chad Brown bids for a boy-girl double in the Grade 2 Hill Prince Stakes and the Grade 3 Noble Damsel Stakes at Belmont Park.

With Chad Brown’s barn in such sizzling form, and the boy from New York state having such a golden touch with turf runners, in any case, it may serve bettors to look no further for the answer to the Hill Prince at Belmont Park on Saturday. The advice may be becoming repetitive, but so are the results.

The standout of Brown’s three contenders is Public Sector (5-2), who hasn’t been off the board in five races in 2021 as he has made his way steadily up the ladder. He graduated to Graded company when winning the Hall of Fame at Saratoga in August and consolidated his standing a month later in the Grade 3 Saranac, when he spotted weight all round and finished off his race well, beating Never Surprised (5-1) by a length, with He’spuregold (20-1) and barnmate Founder (10-1) fourth and fifth.

Further progression may be expected, and Public Sector seems a better proposition than his other barnmate Sifting Sands (8-1), another improving sort who rallied late to win a stakes at Saratoga by a head, and who makes his Graded debut today.

Saranac runner-up Never Surprised rates as a more potent threat, as that run at the Spa was his first off a seven-month break, and he was a little free on the lead before being run down by Public Sector in mid-stretch. He figures to be tighter today and his pace may stretch a little further, although he is 2lb worse off with Public Sector now.

Most of the field is stepping up a little in distance, but Soldier Rising (3-1) is coming right back from the mile and a half he covered in the Jockey Club Derby here last month, when he couldn’t get to grips with runaway winner Yibir.

This is the shortest distance he has faced since his debut and the reduction in route makes sense, as on his previous start – his first in the US after moving from France – he finished strongly to be runner-up to Gufo, beaten a length, in the Grade 1 Saratoga Derby at a mile and three-sixteenths. They went slowly enough in the Jockey Club Derby to turn it into a sprint from the turn and Soldier Rising will be better suited by the likely stronger pace here.

He can confirm placings with JC Derby third Slicked Back (8-1), who was moving right up after finishing runner-up in the Grade 3 Virginia Derby at Colonial Downs, in which It Can Be Done (20-1) was a length and three-quarters behind in third place.

Original (15-1) beat Public Sector by a head when going gate to wire in a stakes here in July, but Public Sector has improved plenty since then and had Original well beat in the Hall of Fame before that horse clipped heels in the final furlong and did not finish.

Horse Racing Predictions for the The Hill Prince Stakes:

Is packed with promising types but none are quite so firmly on the upgrade as PUBLIC SECTOR, who is taken to maintain his progress for his in-form trainer.

Brown has the morning-line favorite in the Noble Damsel too with Tamahere (9-5), and the same sentiments apply as they did in the Hill Prince.

Tamahere doesn’t have the profile of her younger, peppier barnmate, but she is a solid performer in stakes company and won last year’s Grade 2 Sands Point over course and distance on her first start Stateside after emigrating from France.

She was runner-up in the Grade 1 Jenny Wiley on her first start of 2021, and although her form dipped in midsummer she recaptured it when winning a stakes at Monmouth Park last time out, making all and clearing away from the turn to win by more than seven lengths. If she’s in the same mood she’ll be tough to stop.

Brown’s second string is the ex-British Love And Thunder (5-1), who makes her stakes debut after running in a series of allowance races, the last of which she won by almost five lengths here over seven furlongs. She’s hit the board in all five starts this year and is ready to move up.

Love And Thunder’s profile is just a step behind that of High Opinion (3-1), who paid her dues in allowances – winning one – before moving into stakes company in the Grade 2 Ballston Spa at Saratoga, in which she posted a lifetime best when runner-up to Viadera, beaten by a nose. Tamahere was three-quarters of a length behind in fourth after trying to make all, but that filly was a little out of sorts there, has regained her form since, and has a 2lb pull with High Opinion now.

Another allowance winner moving up is Risky Mischief (15-1), who got her score at Saratoga over five and a half furlongs and tries a mile for the first time today.

Shifty She (9-2) won twice in stakes grade at Gulfstream Park in May and June but didn’t cope quite so well in the Grade 3 Ladies Turf at Kentucky Downs last month when never rating a threat in fourth place. She may not have been suited by that unorthodox circuit – many aren’t – but nevertheless will find things tougher here.

Shug McGaughey runs two, best of whom may be In A Hurry (8-1), a comfortable winner of an allowance optional claimer over course and distance last month. Her barnmate Flower Point (12-1) won at a similar level last time out, but in a weaker race, over seven furlongs, and by a narrower winning margin. Both look to be playing for places at best.

There’s a little less substance to the Noble Damsel than it seems at first sight, and Grade 2 winner TAMAHERE is the selection after bouncing back to her best last time.

Get a Daily Rebate and make sure to stay tuned for the latest racing odds, and racing entries.