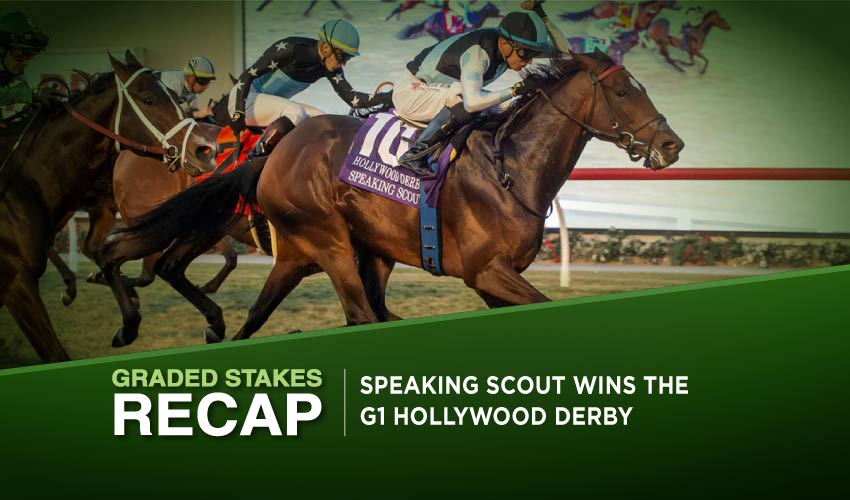 Ten runners went to the gate for the Grade 1 Hollywood Derby 2022 on Saturday at Del Mar Fairgrounds with the Todd Pletcher-trained Wit being sent off a strong favorite on the boards. However, this one would have to overcome a tough gate draw to reward punters with the win.

As expected, it was Evan Harlan who cut out the early speed here after dueling with Spycatcher as they left the gate. The opening quarter was not that quick in 24.51 secs and as they entered the backstretch there were only 8 lengths covering the ten runners.

The favorite WIT had broken well from his wide gate but was taken back by Flavien Prat and settled in a stalking position in sixth as they started down the backstretch.

Meanwhile, the eventual winner SPEAKING SCOUT who was off a bit slow, sat in between rivals one from the back but was now just 7 lengths off the lead.
As they entered the home stretch and set down for the drive, it was here that Spycatcher went for the wire and got a length on the field. In behind Wit was struggling to hit top gear while the winner Speaking Scout traveled strongly but was stopped in his run momentarily, before shaking loose and grabbing Spyctacher fifty yards from the wire to win by ¾ length.

The hard luck story of the race has to be the eventual fourth Handy Dandy who was hampered twice when trying to make his move. While on the far outside came Wit in the five-lane who was closing strongly at the finish and will surely stretch out in distance next time.

12 foes went to post for the Grade 3 Jimmy Durante Stakes and the race was run at a furious pace with the opening quarter flashing by in 22.52 secs and a half mile going in 47.33 secs as they settled down the backstretch.

Ami Please set out to go gate to wire and opened up with a fast first quarter speed, whilst the favorite and eventual winner LIGURIA settled in sixth coming out of the clubhouse turn as they entered the backstretch.

Meanwhile Decorated My Life who was off a step slowly found herself back in the pack and coming out of the backstretch she was one from the back, but moved up menacingly inside as they reached the far turn. She was forced to hold her run as Quickly Park It got caught on heels in front of her forcing jockey Joel Bravo to take back before getting loose in the stretch and she closed late and fast for the second spot.

Sell The Dream matched Liguria down the backstretch, content to sit and stalk on the fence. As they entered the stretch, she moved into the two-lane before tipping back inside for the drive to the wire.

However, she could not match Liguria who kicked clear on the run to the wire and who ran out a comfortable winner. Sell The Dream was edged out for second right on the wire, while the early pace, Ami Please, held well for the fourth spot. She should go well next time if taking a cutback in distance.

Stay tuned for the latest Kentucky Derby Odds. Check out the World’s major Racetrack Results. Sign-up and get up to a 10% horse rebate. We offer the best horse rebate, in the Industry!