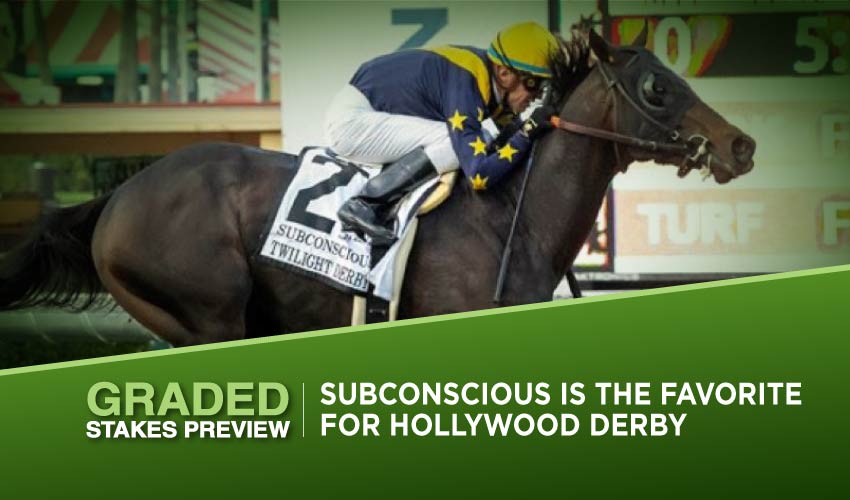 On Saturday, the Del Mar Racecourse holds another high-class meeting focusing on turf performers who will clash in three Grade races. At first, participants will compete in the G2 Seabiscuit Handicap, then two-year-old fillies will show up in the Jimmy Durante Stakes, and in the end, the pinnacle of the whole card, G1 Hollywood Derby, attracted a field of 15 three-year-old colts and gelding. The favourite is clear – Public Sector trained by Chad Brown; however, he’ll meet first six from the G1 Twilight Derby and a promising black-type winner, Camp Hope.

The first of the trio of Grade races is open to three-year-old and older horses who will cover the distance of a mile and a half of a furlong on the turf surface. In this G2 handicap with the purse of $250,000, six-year-old Sacred Life (8-5) trained by Chad Brown looks the most interesting contestant here; he has never finished worse than fourth, including his outings at the G1 level. The once G3 winner in France, Sacred Life took a fine second place in the Seabiscuit Handicap 2019, upon which he grabbed fourth place in the G1 Pegasus World Cup, while in both seasons 2020 and 2021, he earned some money for the connections at the Grade scene. However, he had to wait for his second G3 victory until October, when he scored the Knickerbocker Stakes at Belmont Stakes, displaying a tremendous turn of foot.

Sacred Life managed to bolt up from the back of the field to unfold a late finish in the final stretch, and even though it seemed Field Pass (5-2) was way too far for him, Sacred Life just ran him down at a blazing speed. Such a performance was eye-catching and even breath-taking, and therefore, Sacred Life needs to be considered a victory candidate once again. Still, he’s about to carry the biggest weight in the field of seven horses, but truth be told, Field Pass carries only slightly less. On the one hand, Sacred Life should better Field Pass once more, on the other one, the trip is a bit shorter this time, so Field Pass may actually hold on the front till the very end.

Mentioned Field Pass trained by Michael Maker is also an exciting participant despite what was said about him as he gallops well, has three G3 wins under his belts, and he’s been in fine form throughout the season. The four-year-old should place in this G2 competition, yet, it’s a question of how the duo Field Pass – Sacred Life will manage against less carrying rivals, including five-year-old Flop Shot (4-1), who is given the biggest advantage over the rest of the field together with Lambeau (12-1).

In Flop Shot, Chad Brown has another horse who managed to score a G3 victory back in their “European days,” however, this Irish-born bay has run only three times since being shipped to the US. He finished fifth in the G2 last year and placed second in Allowance races in 2021; still, they might be something about him, and he might use the weight advantage on Saturday. Five-year-old Bob And Jackie (6-1) are another to consider, given he’s been quite reliable at the Grade scene.

In this competitive field, our Seabiscuit Handicap betting pick is SACRED LIFE, yet his jockey needs to time the finish properly; otherwise, he might come too late to catch Field Pass.

The G3 event open to two-year-fillies attracted a field of 11 contestants who are about to clash at the distance of a mile on the turf surface. In the race with the purse of $100,000, only Liam’s Dove (12-1) trained by Peter Miller carries more than the rest of the field due to her victory in the Listed Del Mar Juvenile Fillies Turf in September, which was a surprising result when leaving preferred Helens Well (7-2) behind by a head. The latter ran then significantly better than Liam’s Dove in the Listed Surfer Girl Stakes as she finished second once more, but Liam’s Dove was one but last.

Philip d’Amato bound Helens Well was pointed subsequently to the G1 Breeders’ Cup Juvenile Fillies Turf, where she couldn’t hold the candle to the best participants, finishing eighth. Still, Saturday’s competition should be something Helens Well could handle; moreover, she should benefit from her experience, unlike some of her rivals. Of course, the fillies who have just one outing, preferably victorious, under their belts can draw on their debuts and improve enough to strike at the Grade scene. Yet, in terms of places, Peter Miller’s trio looks interesting as beside Liam’s Dove, he also relies on Travel Smart (6-1) and Tezzaray (4-1). The former broke her maiden at the second attempt, fulfilling the role of a favourite at Santa Anita, while Tezzaray ran twice before being sent to the US to record her premiere victory in November at Del Mar.

Virulente (6-1) could benefit from her victory in France that she achieved in August, and Graham Motion’s Sparkle Blue (4-1) has also caught the eyes because of her latest at Del Mar. As it was said, it’s tough to pick a contender who should benefit most from their previous runs, but the mentioned fillies look the most probable ones.

Our Jimmy Durante Stakes betting pick is HELENS Well who should be classy enough to play an impactful role here.

15 three-year-old colts and geldings will line up for the G1 Hollywood Derby. This turf event will be held at a distance of a mile and a furlong, with the purse of $400,000 being up for grabs.

Public Sector (5-2) is the leading chance among the contestants as he failed to deliver a satisfactory performance only once when running in 12th in the Breeders’ Cup Juvenile Turf in 2020; otherwise, the bay colt won or finished second. Public Sector scored his premiere Grade victory in August when he was pointed to the National Museum of Racing Hall of Fame at Saratoga, upon which he also bagged a G3 win and succeeded in the G2 Hill Prince Stakes. The tough and always hard trying son of Kingman ticks all the boxes to record his first G1 triumph on Saturday as he’s classy, handles the trip, and is trained by turf specialist Chad Brown who also relies on a Listed winner Sifting Sands (15-1), yet the colt didn’t fire in the Hill Prince Stakes at all.

Regarding the most serious threats for the favourite, Subconscious (4-1) catches the eyes thanks to his easy win in the G3 Twilight Derby. Richard Mandella bound colt broke well, settled in second behind the leader, and then took command in the final stretch to confirm his seasonal progress. Subconscious commenced his career in 2021 and broke his maiden at the fourth attempt, upon which he triumphed in an Allowance race and completed the hattrick in the mentioned G3 race.

Public Sector looks classier at first sight; however, Subconscious shouldn’t be discarded here as well as Cathkin Peak (6-1) trained by Philip D’Amato. The gelding hasn’t won a Grade race yet, but he seems a winner in the making, given he’s scored a Listed, finished fourth in the G2, and then he surged forward in the Twilight Derby. He faced some lack of space as he navigated between his rivals, yet his finish was eye-catching, and he could snatch a place on Saturday, too. The mentioned duo is accompanied to the Hollywood Derby by other three participants of the Twilight Derby – third Beyond Brilliant (12-1) and late finishers Husdon Ridge (12-1) and Flashiest (15-1). We liked especially Flashiest for the said event, and despite being only the fifth last time out, we still believe he might be capable of more.

It Can Be Done (20-1) ran an alright race in the Hill Prince Stakes but was weakening in the final stage, so when it comes to springing some surprise, it could be Kenneth McPeek’s charge Camp Hope (5-1). The colt has experienced such a competition just once and didn’t impress, yet his latest performance in the Bryan Station Stakes at the black-type level was outstanding. He rallied strongly to the front to win by 2 and ¾ of a length, and even though he’s about to face fierce rivals here, he could be smart enough to earn some money.

Our Hollywood Derby betting pick is PUBLIC SECTOR who could conclude his successful three-year-old campaign with a bang.