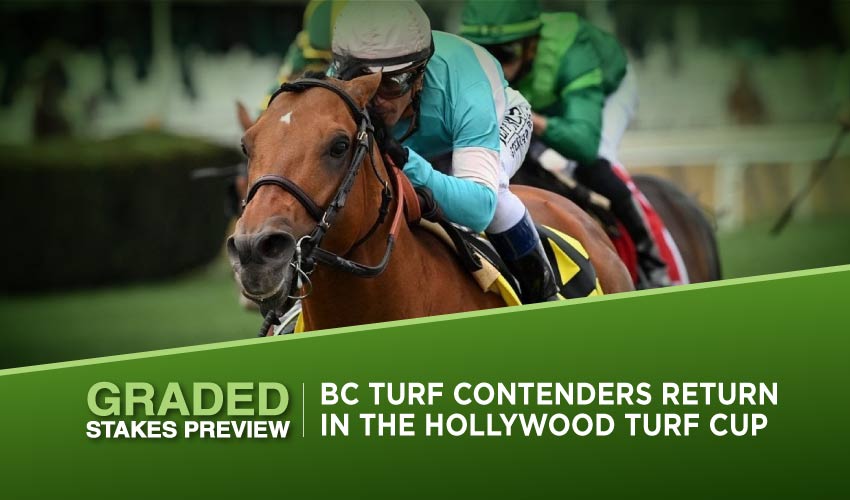 The high-class programme at the Del Mar Track in California continues in the upcoming days as several Grade races are scheduled to take place here. On Friday’s Hollywood Turf Cup welcomes some contestants of the Breeders’ Cup Turf, especially, those who had no luck back then will try to make amends for their performances, including Astronaut, Acclimate, or Rockemperor. On Thursday, fillies and mares will compete in the G3 Red Carpet Handicap, with Luck being the favourite after her effort in the G1 competition.

Saturday is headlined by this G2 turf race held at a mile and a half distance where seven three-year-old and older horses will clash for the purse of $250,000. As the Hollywood Turf Cup is one of the last big turf races for stayers of the year, usually some contenders of the Breeders’ Cup Turf are pointed here, which is also this year’s case, yet we won’t see any of the leading players of the mentioned G1 race.

On the one hand, they didn’t play an impactful back then; on the other one, they didn’t have the ideal trips at Del Mar, so it’s entirely possible they’ll make amends, which could be the case of four-year-old Astronaut trained by John Shirreffs. He finished 12th in the BC Turf after scoring his first Grade victory in the G2 Del Mar Handicap, where he settled in the midpack, upon which he successfully rallied forward to win by half of a length, beating also third Acclimate.

Acclimate ran well in the John Henry Turf Championship, too, when he got beaten only by one contestant after his usual front-running performance, yet he failed to deliver a good result in the BC Turf. Still, the chance of both mentioned horses could be equal given Astronaut won’t have a weight advantage on his side. Rockemperor trained by Chad Brown is the third participant who failed to impress in the BC Turf; however, he’s about to carry the biggest weight on Friday because of his fine victory in the G1 Joe Hirsch Stakes. The five-year-old horse left some exciting rivals behind, and overall, he was just superb on that day, and if he displays something similar again, he should fight for the win.

While he carries the biggest weight, Acclimate and Friar’s Road are on the other side of the spectrum. The latter is a four-year-old colt who once attempted becoming a Kentucky Derby contender, but then he was quickly relocated to the smaller races. Up to this date, Michael McCarthy bound bay has won only a maiden and an Allowance race, but then again, he showed some class when finishing strongly in the John Henry Turf Championship Stakes. In the G2, he rallied in the final stretch to grab the third place, and if somebody is capable of catching Rockemperor off guard, it could be Friar’s Road.

Our top pick for the Hollywood Turf Cup Stakes is Rockemperor because of his fine G1 victory prior to his unfortunate run in the Breeders’ Cup Turf.

Just five three-year-old and older mares and fillies head into this G3 race held at the distance of a mile three furlongs, where they will run for the purse of $100,000. Four-year-old Luck is the leading chance on the turf surface because of her fine effort in the G1 Rodeo Drive Stakes in October. After spending the first part of her career in France, Luck was shipped to the US to Richard Baltas, who sent the filly to the Allowance race, which the bay Kitten’s Joy’s daughter won, upon which she showed up at the Santa Anita Park. Running in the midfield, Luck improved her position in the final turn and rallied forward, challenging the favourite Going to Vegas.

Despite the fact she had to settle for second place, Luck delivered a promising result, and if she shows a similar spark on Thursday, she should fight for the victory at least. Nicest , trained by Michael McCarthy, is another contender who placed among the elite as the three-year-old filly finished third in the G1 Irish Oaks in July. When shipped to the US, Nicest ran in fourth in the G1 Queen Elizabeth II Challenge Cup at Keeneland. She had no chance with the winning participant; however, her performance wasn’t that bad. Nicest shouldn’t be entirely discarded in such a competition as she’s simply displayed there’s some class about her; moreover, she carries less weight than preferred fillies.

Still, five-year-old England’s Rose seems to be more popular among the bettors as John Shirreffs’s charge has scored two victories in a row, yet just in the Allowance company. She might be capable of running a good race in this G3 event, but being a five-year-old with only 7 starts under her belts, England’s Rose and her ability is just tough to gauge. Three-year-old Single Soul could draw on her latest victory in the Allowance as she’s still at the beginning of her career, while Neige Blanche is way more experienced. The Leonard Powell trained four-year-old scored the G3 Santa Barbara Stakes and also ran in fourth among a G1 company twice, including her latest performance in the Rodeo Drive Stakes. She’s definitely a place contender; however, she’ll carry the biggest weight here together with Luck.

Our betting pick for the Red Carpet Handicap is Luck due to her classy effort in the Rodeo Drive Stakes; however, Nicest could cause an upset when using the weight advantage to the fullest.