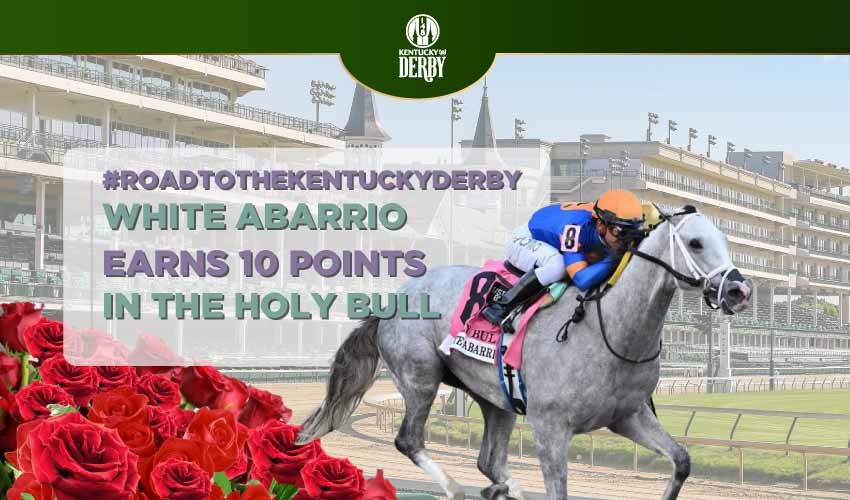 The dominant victory of White Abarrio in the Grade 3 Holy Bull S was the high point of a stakes-heavy afternoon at Gulfstream Park on Saturday, the colt setting himself up for a tilt at the Kentucky Derby.

Elsewhere it was jockey Luis Saez who ruled the roost, posting a Graded-stakes treble with My Prankster (Swale), Girl With A Dream (Forward Gal), and Opalina (Sweetest Chant), while Todd Pletcher – trainer of My Prankster – completed a double with the fast-finishing Grand Sonata in the Grade 3 Kitten’s Joy.

Abarrio takes Bull by the horns

On a weekend when the Kentucky Derby pecking order underwent a shake-up, the success of White Abarrio in the Holy Bull S at Gulfstream Park on Saturday confirmed him as a genuine contender.

The day’s feature was the first real Derby-prep showdown on the ‘Road’ with several big-name candidates in opposition and ten RTKD points on offer to the winner, and White Abarrio, the 6-1 fifth-choice, punctured a few reputations with an authoritative victory in a race that lost its expected shape when Simplification, predicted to be on the lead, was slow at the gate. With him in rear, it was left to Galt to set the fractions with White Abarrio pressing him through the first half-mile.

The grey took over passing the quarter pole and swiftly opened up a lead that he would sustain to the wire, drawing off to win by four and a half lengths in a time of 1:42 and four-fifths. Simplification made up the ground he had forfeited but had nothing much left for the stretch drive, although he dug in to hold off the fast finish of 8-5 favourite Mo Donegal and keep second place by a head. Galt faded, finishing fourth.

The board horses remain very much on the Derby trail, although that can’t be said for the very disappointing Tiz The Bomb (seventh), who looked all at sea on the switch from turf to the main track, and Breeders’ Cup Juvenile third Giant Game (eighth), who showed up early but dropped right away.

“I don’t think distance is going to be a problem,” said winning jockey Tyler Gaffalione. “He was just hitting his best stride down the lane, and galloping out I had a really difficult time pulling him up. I was calling for the outrider.”

White Abarrio was making his stakes breakthrough in the Holy Bull S after finishing third in the Grade 2 Kentucky Jockey Club on his previous start. He’s now three-for-four, and trainer Saffie Joseph indicated that he was likely to have his final prep for the Derby in the $1,000,000 Grade 1 Florida Derby back at Gulfstream on April 2.

Prankster has the last laugh

Fresh from his big-race haul at Gulfstream the previous weekend, the in-form Todd Pletcher kept the heat turned on when sending out even-money favourite My Prankster to win the Swale.

The son of Into Mischief took his record to three-for-five under a canny ride from Luis Saez, who kept My Prankster away from the brisk pace set by In Dreams until turning him loose four wide on the turn. He duelled with Dean Delivers from the eighth pole but put that game rival away inside the final sixteenth and hit the wire half a length clear, stopping the clock in 1:23 and one-fifth. Of A Revolution was two and a half lengths away third

“We knew they had a lot of speed in the race so the plan was to get him in the clear and go from there,” said Saez. “He always tries and he tried pretty hard today.”

Luis Saez landed the middle leg of a Graded-stakes treble when the Brad Cox-trained Girl With A Dream took her winning streak to three in the Forward Gal, the 5-1 third-choice going gate-to-wire to win by a length.

Girl With A Dream had a dream run on the lead, but the race was a bit of a nightmare for 3-5 favorite Radio Days, who was steadied after the start and although making good ground through the stretch could never get close enough to lay a glove on the front-runner. The longshot Last Leaf came through from last place at halfway to take third, six and a quarter lengths back. The time for the seven furlongs was 1:23 and two-fifths.

“She was pretty comfortable all the way,” said Saez. “At the top of the stretch I felt like I had a lot of horse, and when the other filly came close to her she responded well.”

Opalina is a little jewel

Two races later, Saez had his treble thanks to Opalina, a 4-1 joint-second-choice who benefited from having nothing to do with a brisk pace before coming running through the stretch to score by an assured three-quarters of a length.

The longshot Myfavoritedaughter had them all strung out behind on the backstretch and still held the call at the eighth pole, but Opalina found a decisive change of gear and ran down the tiring front-runner before turning back the late thrust of Ambitieuse, stopping the clock in 1:41 and one-half. Miss You Ella came through late to take third, a length and a quarter further back. The favourite Nostalgic was last of nine.

“Last time she was anxious in the receiving barn, but today she was perfect, relaxed,” said trainer Roderick Rodriguez. “She settled back and just made one big run, and that’s the way I want her to run.”

Pletcher wasn’t done with the big-race action, completing a double and getting the exacta for good measure in the Kitten’s Joy when Grand Sonata finished strongly to catch barnmate Royal Spirit in the final strides.

The Medaglia D’Oro colt, fifth-choice at 5-1, sat in behind a steady pace set by the 9-5 favourite Coinage and was a little short of running room in mid-stretch as Royal Spirit went to the lead. As soon as Tyler Gaffalione showed him daylight, though, Grand Sonata took off and drove to the line to win by a neck in a time of 1:41 and one-half. Coinage kept on gamely for third, beaten a further length and a quarter.

“He’s a really nice colt, very professional,” said Pletcher. “This horse has a big turn of foot and Tyler knows it – they finished off in a rush.”

Follow us on Social Media for Holy Bull S updates!